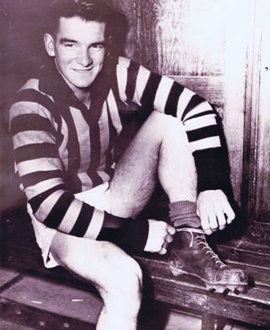 Some players get to ease into their VFL careers by getting their debut in a relatively ‘soft’ game. But not Don Walsh.

The country boy from Cohuna made his debut in the cauldron of a Collingwood-Carlton game at Victoria Park midway through 1954. And not just any Magpies-Blues clash either, but one that would go down in history as one of the wildest ever between the two fierce rivals. Players from both sides were flattened, fisticuffs flew freely and spot fires broke out all over the ground.

But the game was memorable for more than just the fights, with the Pies storming home in the last few minutes to haul in a Carlton lead and win by nine points. The home crowd, as you might expect, went berserk.

It must have been a hell of a first outing for Don Walsh, who had been photographed for a newspaper the day before his debut looking relaxed and “whistling all day as he unloaded cigarettes in a Melbourne tobacco factory”. By then he’d more than earned his crack at the big time.

He’d approached the Cohuna Football Club as a 17-year-old, asking them for a game, but was told even their seconds side was full and they didn’t need any more players. So he went to neighbouring Union Football Club and six months later walked away with their award for best first year player in the seniors.

Two years later he was sent to do his National Service at Puckapunyal and it was here, during a scratch football match, that he was spotted by Collingwood scouts, who signed him on the spot.

Walsh first tried out with Collingwood prior to the 1953 season, but decided to go back home to Cohuna for another season with Union. He finished second in the competition best and fairest that year, and decided to have a second trial at Collingwood in 1954.

This time he was better prepared as a player and the Pies had no hesitation adding him to their list. He played mostly in the centre for the club’s reserves and did well right from the start. After one of his early games for the seconds, the Argus reported that he had “stood out” with his play in the centre, but was unlikely to be able to make his way into the seniors soon because of the competition for spots from players like Bob Rose, Des Healey and Thorold Merrett.

But he continued to turn in good games in the seconds, and the Pies were said to have a “high opinion” of his abilities. So when Merrett broke his leg in Round 6 and Healey bruised his thumb the following week, Walsh was given his chance and elevated to the seniors. It was a big week for him, as he became engaged to his childhood sweetheart Dorothy the night before the teams were announced.

Don kept his spot for a second week, spent some more time in the seconds, and returned to the team late in the year, managing a handful of senior games overall. It was those late-season games that really made people sit up and take notice. He starred against Geelong in the second last round of the season, prompting the Sporting Globe to hail his “impressive” performance. “The youngster handled the ball well, made position intelligently and fought on courageously to more than break even with his opponent,” the paper said.

The Sporting Globe writers weren’t the only ones impressed. Norman Banks and Ian Johnson broadcast the game on 3AW – a broadcast sponsored by Heinz – and voted Walsh Collingwood’s best player of the day. During the week, he received a letter from Heinz congratulating him – and a package of Heinz 57 varieties products. Family legend has it that they dined on baked beans for weeks afterwards!

Walsh was a classic midfielder in the VFL. His ball-handling was a standout, as was his composure, balance and fine kicking, especially his long drop kicks. It all contributed to an encouraging first season, at the end of which renowned footy writer Hec de Lacy nominated Walsh among his best recruits of the year, saying he “looked excellent material” on a wing. He finished third in the reserves best and fairest that year, from only 12 games, and a good career looked likely.

But the in jury crisis that had plagued Collingwood in 1954 abated in 1955, and Walsh found opportunities harder to come by in a team that was on its way to a grand final. He played 16 games with the twos and was still regularly named among the best players, but only managed to break into the seniors for one game. The highlight was being included on the team’s trip to SA and WA.

After such a frustrating year, it was no surprise when Walsh, his wife and young child decided to return home to the dairy farming at Cohuna. He resumed playing with Union in 1956 and enjoyed a wonderful career, winning the competition best and fairest in 1961 as a full-forward, as well as several district goalkicking awards and numerous best and fairests and goalkicking awards for his club. He was, indeed, a bit of a legend around Cohuna, though family members say you would never know it from his quiet, gentle and humble demeanour.

There were, according to his family, ‘four Fs’ in Don’s life: Family, Football, Fishing and Farming. He remained a passionate Collingwood supporter for the rest of his life, and passed on his love of the Magpies to the rest of his family. He had four children, nine grandchildren, 17 great grandchildren, eight siblings and over 30 nephews and nieces. And all of them barrack for the Pies. By the time their families are taken into account, his family estimate there are more than 200 Collingwood supporters within his own extended clan that Don Walsh can lay claim to. That’s a mighty legacy to have left.

Don passed away, with his Magpie-loving family by his side, in March of 2016.