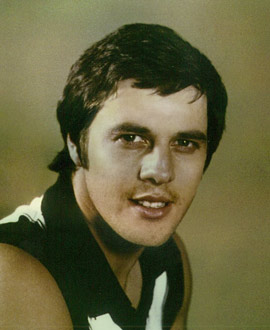 THE enduring image of defender Doug Gott for many Collingwood supporters comes from his final game of VFL football.

In a dramatic final term of the 1977 Grand Final – played out before 108,224 fans and beamed live across Victoria – Gott went down with a serious knee injury and was stretchered from the field. He hobbled out to see the dying moments as his great mate Ross ‘Twiggy’ Dunne kicked the goal that saw the premiership playoff end in a draw.

That proved to be Gott’s 97th – and last – senior game for the Magpies in a career that stood out for a few different reasons.

The first centred on his on-going battle with his knees, without which he would have played many more games in black and white. The second was his ability to balance football with his true passion – cricket – at a time when elite sportsmen could still manage it, even if time was running out for them. And the third was his penchant for wearing long-sleeved guernseys (a habit he only broke with on one or two occasions when it was unseasonably hot).

An elegant left-footer, Gott spent a few seasons playing in attack, but was at his best in the back line where his size (191cm) and his long arms served him well as a strong-marking defender who could play close to his opponents, yet also attack as well. He was a lovely judge of the flight of the ball, a nice mark and a superb, raking left-foot kick. He was composed under pressure and rarely seemed flustered – handy attributes for a player who regularly found himself stationed in the last line of defence.

He showed considerable talent from an early age, playing football with Northcote Park before moving across to Ivanhoe Amateurs. He was a Collingwood cricketer – impressing with his fast-medium bowling – before he was a Collingwood footballer, with the linking of the two coming in a social footy match in the late 1960s between the sporting teams that shared Victoria Park.

“We used to have a game against the footballers, and Keith Stackpole Sr was the cricket coach,” Gott would recall years later on SEN. “After the game we were just socialising, and Stacky mentioned to ‘Rosey’ (Collingwood football coach Bob Rose) that I played a bit of football. Stacky said ‘Why don’t you get him down and play a few practices games? I came down and played a few practice games (in 1968), and found myself in the seconds’ games. Then the next week I was elevated to the senior (practice) match.”

He would play his first senior VFL match against Melbourne in Round 14, 1969 – 12 days after his 19th birthday, and just over a week before Neil Armstrong took his famous first steps on the moon. Wearing the No.34 jumper, he spent most of the match on the reserves bench, before coming on in defence deep into the last term.

He managed four games in that debut season and, though overlooked for the team’s disastrous finals campaign, was still judged as Collingwood’s best local recruit (South Fremantle’s Max Richardson won the best first year player). But a mysterious knee injury – a forerunner of trouble to come – ruined his 1970 season and he managed only one game.

“For some reason my knee would lock,” he would explain. “I didn’t know why, (but) every time I would twist and turn, it would just lock on me. I missed a season and a half of football, and I missed the entire cricket season (that followed).”

Gott opted against surgery, and instead enlisted the support of a masseuse named George Carter, who was based in Mordialloc. That treatment allowed Gott to return for two senior games in the middle of the 1971 season, including one game against his childhood hero Bob Skilton – but he couldn’t secure a regular slot.

When Rose quit as coach at the end of 1971, his replacement Neil Mann provided Gott with a new opportunity, and a positional change. He transformed into a centre-half forward, playing 17 games for 14 goals in 1972, and 19 games for eight goals in 1973.

In the final game of the 1973 season, Gott was switched to full-back and held that position throughout the finals series. He was described that season in the Football Recordas “one of the big improvers … who held down centre-half forward … (and) when shifted to full-back … he showed he could be an asset.”

Heartbreakingly, he was a member of the Magpies’ 1973 preliminary final side that blew a big lead to Richmond on the penultimate weekend. Two months later, his cricket career received an enormous boost. Having been reported in a district cricket match for Collingwood, he was approached by Victorian powerbroker Bill Jacobs and asked if he “wanted the good news or the bad news.” Gott chose the bad news. Jacobs informed him he had received a two-game suspended penalty. The good news was his selection for Victoria in a first-class match against New Zealand the following Friday.

His first wicket was Sir Richard Hadlee, and all four of his first-class games came in that summer of 1973-74. He took nine first-class wickets at 45.33, and made 33 runs without losing his wicket, leaving him without a batting average. That was the end of his first-class career but at District level he was a star (and would later be named in Collingwood Cricket Club’s Team of the Century).

But while his passion for cricket was stronger than his affection for football, it was the latter that paid most of the bills. So he returned to the footy field, playing 19 games in Murray Weideman’s first year as coach in 1975, but only nine the following year as the Magpies sunk to the bottom of the ladder. Tom Hafey’s arrival at Collingwood in 1977 initially counted against Gott, as the new coach didn’t particularly like players missing sessions for another sport. He didn’t play his first reserves game until Round 7, following the 1976/77 summer of cricket.

But an injury to defender Ian Cooper as the Magpies made their charge towards September gave Gott his chance and he took it with both hands. He was back in the senior team by Round 21, and held his spot through the finals, including a strong performance in the second semi-final victory over Hawthorn. At three-quarter-time of the 1977 Grand Final against North Melbourne, the Magpies looked to be headed for that long-awaited September success until the script changed dramatically. The Kangaroos staged an inspired comeback and Gott went to ground with his knee injury 10 minutes into the final stanza.

“When I grabbed my knee the first time, the knee cap was around the other side …  then I felt it slip back into the top and it blew up like a balloon,” he said. “It turned out I had dislocated my knee cap and cracked it.”

He was the only change in either side – replaced by Chris Perry – in the replay the following week, which the Magpies lost by 27 points. That left Gott stranded three short of the 100 games required for life membership of the Collingwood Football Club. In an effort to get there, he returned the following year, with both knees strapped up, but couldn’t break into the senior team.

Thankfully, after a few years away from Collingwood, he was coaxed back by his great mate ‘Twiggy’ Dunne to assist with the under 19s and development squads. That link lasted for almost a decade, as he helped to fashion the next generation of Magpies coming through.

Fittingly, Gott was rewarded with life membership of the club in 1991, an honour that would have been bestowed on him a lot earlier but for his troublesome knees.