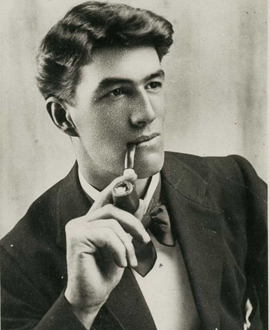 Coming in to the 1901 football season, Doug Watsford seemed destined for stardom.

He’d played 21 games in his first one-and-a-half seasons with Collingwood and made a huge name for himself as a follower and key position player. Tall, strong, fast and a wonderful mark, he seemed to have it all. Critics raved about his performances, and potential.

But remarkably he never would add to those 21 games. Instead, a combination of illness and a desire to follow his faith would see him turn his back on what looked likely to be a great football career.

Doug was born near Ballarat, into one of the most famous Methodist Church families in the country (his father and grandfather were both preachers, the latter, John Watsford, being particularly well known and regarded by some as the father of Methodism in the colony), and made his way to Melbourne alongside older brother Stan. Both were highly talented sportsmen, and as the family moved parishes they spent two years in Gippsland, playing for the Strezlecki club (near Korumburra).

Doug headed to Western Australia in 1896, playing football andcricket with Coolgardie (including one game against George Giffen’s Australian XI in 1897, in which he opened the bowling against Syd Gregory and Joe Darling, taking both their wickets). He played with Fremantle in 1897, then later returned to Melbourne andbegan playing for the Dandenong Ranges club.

It was from there that the Pies recruited him midway through the 1899 season, overcoming interest from Melbourne to do so. He debuted against St Kilda in Rd 10 – and what a debut it was! Within the first three minutes he had taken what one newspaper described as “a brilliant mark”, and followed up with a lovely kick for a goal. He kicked another goal later in the game and generally played an outstanding game as a follower/forward, sending critics into raptures.

“Watsford, a finely built young fellow, was being eagerly sought after by the Redlegs but decided to throw in his lot with the Maggies. He is an acquisition to the club. His marking is a feature, being both neat and clean, and his unperturbed manner was admired by the onlookers,” said The Mercury after the game. The Australasian described him as “a splendid specimen of a man both in physique and ability as a footballer”, while Punch simply said he was “a clinking footballer, whether following or placed.”

The praise continued to roll in, as evidenced by this note in The Age: “In Watsford, a new man from Dandenong, the Magpies have secured a most useful player—strong, tall, heavy, and withal quick, he is a magnificent mark and a long kick, and, judged by his work on Saturday, is an acquisition to the team.”

Watsford stood about 6’2” in the old language but was mobile for his size while still being strongly built. He was a sure mark, a wonderful long and accurate kick and a footballer who understood the game. He was from all reports a quiet and unassuming man, quite unfazed by all the attention he was receiving and equally unfussed when opposition teams tried to rough him up.

He played all the remaining games in 1899 and continued to draw plaudits from the press. The Mercury described him variously as “a gem” and “a ringer” and said he “marked and kicked as a past master of the art”. “Woodites are proud of having such a sterling player in their team.”

Doug started the 1900 season in blistering form, being best on ground in several practice matches and then repeating the dose against Geelong in the second game of the season, then again the next week against Essendon. “D. Watsford, the tall Magpie forward and follower was the best man on the ground; marking, kicking, or running with the ball, it was all the same – he shone everywhere,” wrote The Mercury after the Geelong match.

It really did look as if Doug Watsford was going to be a star. But after playing the first eight games, The Herald reported that he has been ordered to have a month’s rest “through ill health” and that he had gone to Wagga Wagga to recuperate (ironically, the Collingwood players made a mid-season trip to Bright, Wangaratta and Wagga during his convalescence there, playing matches against local sides).

He missed four weeks, but returned for the last five games of the season. He starred in the 1901 practice matches, but on the eve of the season The Herald reported: “Just before the season opened, Doug Watsford was in splendid fettle for football. But he was stricken with ill-health. I’m glad to say he’s improving, and hopes that the climate of Wagga, whither he has gone, will brace him up completely in very little time.”

Unfortunately, Wagga Wagga failed to work its magic a second time. There would be no return for Doug Watsford this time. It’s believed he never played football again.

But he certainly kept himself busy, especially through his involvement with the church. In 1902 he went to New Zealand as a missionary but had to return home after four months due to ill health. In 1903 he bought a block of land in Gippsland as he and his brother Stan decided to get into farming (Doug was trained as a vet), but early in 1904 Doug took a position in West Australia. He was married by this time (though four years later he would lose both his wife and only child, several years later marrying his late wife’s sister!)

His health was still troubling him, however, and at one point he travelled to India seeking help. In 1906 he returned to Victoria from WA, to take a post in Mooroopna. In March of 1908 he was appointed by the Bishop of Bendigo to a position with the District of nearby Serpentine. He made a great success of that, and his health gradually improved. But it deteriorated again after he moved to Kangaroo Flat, and despite further trips to England and France, it was there that he passed away in 1915. Stan had moved to Bendigo in 1913 to be with him in his final years.

After his death, Watsford was mourned widely and his contribution to the church celebrated. “He was a man of immense capacity, wide and various information, skilled as a veterinary surgeon, gifted with wonderful power of eloquence, and, above all, a born preacher,” wrote The Inglewood Advertiser. “Few men have travelled so far, seen so many peoples, made themselves acquainted with so many callings. We may safely say of him, we shall not easily see his like again.”

It’s noticeable that none of the eulogies mentioned Doug Watsford’s time at Collingwood, and his death passed largely without notice in football circles. That would almost certainly have been different had illness spared him longer and enabled him to fulfil the immense promise he had shown in his two seasons as a Magpie.