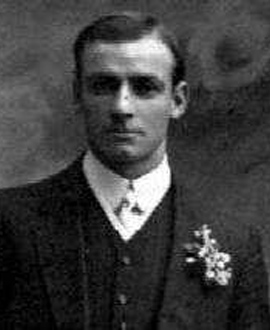 It’s fair to say that, while Edward Stow made a significant impact in his two senior games with Collingwood, he had a far tougher time of things in his life outside of football. He had several court appearances in the years before and after his brief footy career, his wife died at a very young age and later still he would experience the loss of a son in the cruellest circumstances imaginable.

All that must have seemed a lifetime away when he debuted for the Magpies against Footscray in Round 8 of the 1895 season. Stow, who hailed from Yarraville and played locally with Newport, was a big man, standing nearly 6’4” – an exceptional size for the time – and it was that height which really made him stand out.

The Australasian wrote: “[Collingwood] had in the team a new man named Stow, who was tall enough to reach the ball without jumping when going for a mark.” The Argus noted: “Collingwood havediscovered a promising novice in Stowe (sic), who … has not been stunted in his growth.”

But it wasn’t just his height that turned heads in that debut game. His marking was also exceptionally good, and he kicked a goal into the bargain – one of only four the Magpies kicked that day. He also obviously set high standards, because he told one newspaper later he “should have kicked three”. The Herald observed later that Stow had “pleased” Collingwood with his performance.

That was enough to get him a second game, the following week against Geelong. But then he largely disappears from the football radar. It’s not known if he was injured, or dropped and returned to lower level football. But his name doesn’t really crop up again even in the years ahead, suggesting he might have retired from the game.

He married in 1897 (though his wife would die just four years later) and had by this stage taken up a job as a machinist with the railways. So it’s possible the pressures of working life and a young family simply got too much for football to remain a significant part of his life.

That life had already begun to run into a few problems. Prior to playing at Collingwood he was charged with insolvency caused by personal illness and pressure from debtors, a case repeated twice more in the 1890s. As mentioned, his wife died in 1901. In 1914, a girl who was living with his family was stabbed by her former fiancée near the home, with Edward having to take the assailant to the police. Then in 1918 he was found guilty of pilfering tools and materials from the Newport Railway Yards, where he worked, and was sentenced to three months in prison.

But the worst was yet to come.

In 1920, his 14-year-old son Ernest was having a kick around of the footy with some mates at the engineering workshop where he was apprenticed. The ball went onto the roof and Ernest clambered up to retrieve it. But his clothing got caught in belting which controlled a large turning shaft and he was hurled against the building’s beams, dying in hospital from the injuries soon afterwards.

The accident must have devastated Edward Stow but he carried on, and remained living in Yarraville until he died many years later at age 84. His brother, Arthur, played with Williamstown in the early 1900s, so football talent obviously ran in the family. But unfortunately that wasn’t enough to keep Edward in the game for long, despite his obvious promise, and a debut that in 1895 had the football world talking.