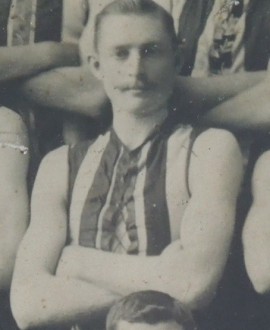 Eddie Murphy was the first Collingwood player to also hold an administrative office while still appearing in matches on weekends. He would also, sadly, be one of the first Magpies to die early, passing away before his 30thbirthday.

Murphy was born at Beechworth in 1869, the only son of a local miner named Laurence who was involved with the Beechworth Mining Board. Eddie was educated at the St. Joseph’s primary school and the Beechworth State school, and then to the Beechworth Grammar School to gain his qualification for a Government job, after which he found a position in the Crown Law Department.

He moved to the city with his new job and soon took up football, being tall, well built and regarded as an “ardent athlete”. He played with Britannia, and in 1891 he won a clock from that team for being the best follower.

And that was a reputation that followed him when he joined Collingwood the next year. He played in the club’s first ever game against Carlton in 1892, named as follower/first ruck. Later that year The Evening Standard wrote: “Murphy has few equals in the ruck, and at high marking he stands on a level with [Essendon champion] Tracker Forbes. His position in the Collingwood team is following, and in that capacity he has made a name for himself.” The Australasian described him as “a champion high mark and follower”, while also noting that he had “the knack of handpassing almost with the same certainty to a comrade behind as in front of him.”

It’s fair to say that Murphy was widely admired within football, not just for his skills but also for the way he played. The Herald once said he was “one of the quietest, fairest and most unselfish players” in the game.

He also became one of the club’s most reliable and consistent players in the 1890s. He played 72 games across the five seasons between 1892 and 1896 – the fourth highest for the club in those VFA days.

He had initially intended to stand down after the 1894 season to give some younger players a better go at things, but was pressed into changing his mind. That was a smart move by the club, because he would go on to play 29 more games over the next two years – though he sadly missed out on selection in the 1896 Grand Final.

By that time he was already serving as the club’s Treasurer, having taken over the role in 1894. His professional career had flourished since moving to Melbourne, and he served as a clerk of courts in Collingwood before being promoted to work as an associate for one of Melbourne’s senior judges.

Murphy continued to serve as Treasurer in 1897 and frequently trained with the team, though he never played a senior game in the VFL era (though he did travel with the team for matches in Adelaide mid-season).

Early in 1898, reports emerged that he’d had an operation but was recovering well. Not long afterwards he suddenly moved to Wangaratta as clerk of courts, apparently in the hope that a change of scenery might improve his health.

The sudden move meant he was deprived the sort of farewell he had earned. The club instead gave him a diamond locket and passed an official motion that: “The Committee deplore the loss occasioned to the Club by the removal of Mr. Murphy to Wangaratta, thus depriving it of his services as Hon. Treasurer, which position he has filled with credit to himself and honor to his Club for the past four years. The Committee have observed with great satisfaction the energy and zeal he has always displayed, the accuracy and neatness of his books and accounts, his unassuming manner and generous disposition, all of which have endeared him to the hearts of many and gained for him lasting friendships.”

Sadly, the move did nothing to improve Eddie’s health. It transpired that he had contracted stomach cancer (a couple of newspapers suggested his illness could be traced to a kick he’d received during a football game in 1896). He would eventually pass away in September of 1898 after a long and painful illness. Incredibly, he had still been playing less than two years before his death.

The Argus noted that the Collingwood players wore black crepe paper mourning bands when they played the Saturday after learning of Eddie’s death. “The event created a feeling of genuine sorrow amongst Collingwood footballers, for Mr. Murphy was not only a leading player for years, but always enthusiastic as to the welfare of the club,” the paper said. His local paper back in Beechworth said: “Mr. Murphy was esteemed throughout his brief career as a young man of a genial disposition in private and most courteous and obliging in the discharge of his official duties.”

The Herald wrote: “Football players will regret to hear of the death of Francis (Eddie) Murphy, one of Collingwood’s foremost ruckmen in the past, and ex-treasurer of the club. For five years he was an officer and player, and corned the greatest admiration of his comrades. At the beginning of this season he was transferred to Wangaratta, in the hope that the change would improve his bad health, but his disease had obtained too firm a hold, and death relieved him of his sufferings on Tuesday morning. His memory will be long cherished by the members of the club.”

And so it was. Eddie Murphy’s life might have ended tragically early, but he would have left knowing that he had had a huge influence, both on and off the field, on the Collingwood Football Club in its earliest days.