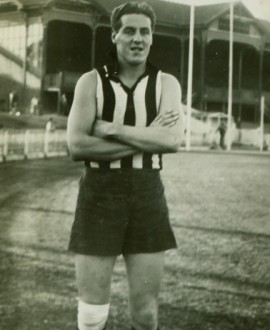 In 1948, Ern McIntyre was one of the game’s more highly regarded big men. He’d played 80 games for St Kilda, kicked a more-than-handy 57 goals, and represented Victoria.

So it was quite the sensation when he decided to quit the Saints early in the 1948 season after a falling out with the club. Nine other clubs came after him, and in the end it was Collingwood which won the race for his services. And in a style befitting one of the League’s more enigmatic players, McIntyre’s star burned brightly at Victoria Park, but not for long.

Ern McIntyre was a big boy. At age 20 he stood around 190cm and weighed around 90kg and was described as having “all the attributes of a League footballer.” He first played with St. Patrick’s College in East Melbourne, and in 1939 played in St. Kilda’s practice matches but could not make the grade so transferred to Sandringham. He returned to the Saints in 1940, however, kicking a goal on debut and also being a part of the club’s Patriotic Cup Lightning Premiership at the MCG.

He played only two games in 1941, none at all in 1942 and just three in 1943 because he was serving in the navy (until his asthma rendered him unfit for further service). But when he returned he quickly made his mark as a strong marking big man, and by 1945 was part of the Victorian team. He had very clean hands and was an accurate shot at goal, meaning he could be played as a key forward as well as in the ruck, where his size and strength always made him a formidable force. He was outstanding at using his body to make position for either ruck or marking contests.

But Ern McIntyre was not your ‘typical’ footballer. A dentist by profession, he played his football as an amateur. He was also a highly regarded singer who performed professionally around town. And he was an outstanding cricketer, playing two games for Victoria as a fast bowler in 1946-47, taking 11 wickets.

But it would be his amateur leanings, and the associated ideals of good sportsmanship, that would ultimately be his undoing. In one game in 1948, he helped an opponent, Melbourne’s Don Cordner, to his feet. The next week he applauded a mark taken by Richmond’s Bill Morris.

This was too much for St Kilda officials – including coach Fred Froude – who made clear their displeasure. They felt he was being too ‘soft’ and that his actions weren’t in the best interests of his side. They relegated him to 19thman for one game soon after, at which point McIntyre quit, claiming he’d been subjected to a ‘pin pricking’ campaign by Saints officials. Ironically his last game for the Saints had been against Collingwood.

A few weeks later, and after some messy faffing around over his transfer, Ern was playing for the Magpies – although his adventure here didn’t quite get off to the start he wanted, being loudly heckled at his first training session by a group of spectators.

On the field itself, however, it was a vastly different situation. He kicked two goals from centre half-forward in his Collingwood debut against Fitzroy (who he’d played against just two games previously while with St Kilda!). Two more came against Footscray the next week. Then four against North Melbourne. He kicked at least a goal in every one of the eight games he played for the Magpies that year. Unfortunately he also missed four weeks, being rubbed out for belting Carlton’s Ollie Grieve in Round 16, and only coming back for the losing preliminary final (where he kicked two more goals).

Still, it had been a brilliant start to his career in the black-and-white, and hopes were high for what was to come. But that’s almost where it ended. He played the first three games of 1949 but then missed most of the rest of the season through injury. He came back for the Round 19 game – coincidentally, against St Kilda – and that proved to be his last VFL game. He actually retired from football at the end of the season, though he would later attempt a brief and ultimately short-lived comeback with Sandringham in 1952.

Fast bowler. Dentist. Accomplished crooner. Naval officer. Asthma sufferer. Ern McIntyre was all these things, and more. For a while he was also a Collingwood ruckman/forward. And while his time with the club was brief, it wasn’t short on excitement.