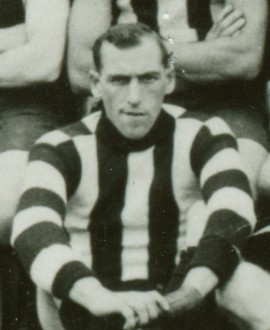 It’s fair to say that 1915 was a tumultuous year in the life of Ern Utting. In the space of a few months, young Ern was involved in a street brawl, found himself hauled before the courts and then headed off to the First World War.

Born and bred in Collingwood, Utting was a tough little kid from a tough suburb. In April of 1915, aged 18, he was part of a ‘push’ of youths that gathered in Smith Street. The police were called in, there were some altercations, and Ern found himself charged with assaulting a policeman. Two months later, he was convicted and fined.

But he had very little time to dwell on his misfortune, as he enlisted the very next month as a Gunner with the 47th Field Artillery. In court he’d given his occupation as a bootmaker, but on the enlistment forms it was ‘traveller’s assistant’ (salesman). Either way he headed to the Front, but his time there was brief. Ern had a heart condition that had afflicted him since suffering illness as a child. This occasionally made him short of breath, and he was discharged from the army as medically unfit in 1916. (as an aside, one of his brothers, Charles, won a military medal for bravery in the field in 1918)

Luckily, his early return provided the chance to start what turned out to be a remarkable football career. He played with Preston in 1917 before crossing to the Collingwood District Football Club, and he made a solitary appearance with the Collingwood seniors in 1919, kicking two goals in a promising debut. But it was his performances with the District side in the rest of that season which really got Magpie fans excited.

Despite standing just 166cm tall, Utting became the District competition’s dominant goalkicker. Using his judgement, speed, tenacity and uncanny reading of the play, he kicked more than 90 goals for the season, which some newspapers said “must have been a record”. He kicked five goals in a semi-final, five again the next week and regularly was in the goals as his team won the flag. Already it had become clear that he was too good for that level of football.

But he struggled to quite take the next step to VFL level. He played 12 games and kicked 23 goals in 1920 – a good return, marked by a bag of five goals and two bags of three. The nose for goals that had served him so well at lower levels still functioned effectively in the VFL, and he was particularly good at scouting the ball off packs. He filled in for Dick Lee in several games, and played alongside him in others, but had limited impact in a number of games and was criticised for “straying too far from the goalposts”.

Still, it had only been his first full season, so Magpie fans had plenty of reasons to be optimistic. But his career was briefly derailed by another off-field incident – a hotel brawl on Good Friday of 1921 that resulted in charges of assault and property damage. The fallout from those charges saw him miss the first half of the season, and he played out the rest of the year with the District side. He played three more games early in 1922 – for four goals – before returning to CDFC and playing in another Premiership.

Not unreasonably, Ern figured that his career at Collingwood was going nowhere. Sixteen games spread across three seasons was scant return for a player of such obvious quality. So he crossed to Hawthorn, then in the VFA, in the hope that a fresh start would bring more opportunities. And what a brilliant move that turned out to be.

It was the Hawks who made the masterstroke, actually, moving Utting to the back pocket. There he quickly won renown as a tough, dashing, fearless defender who “always fought like a tiger” and was famous for his “tenacious attack on the ball”. A recent publication of the Hawks Museum said: “His balding head and bowed legs made him a real favourite with the supporters as he guarded the opposition goals with fierce determination.”

Utting became a star at Hawthorn. He played in that team’s first game in the VFL (along with fellow former Magpies Jim Jackson and Stan McKenzie) and was the only player from that side to go on and play over 100 VFL games for the club. He was the first Hawthorn player to reach that mark. He won Hawthorn’s Club Champion award in 1927 and 1929. He was vice-captain in 1928, and again from 1930 until his retirement in 1932. He finished in the top 10 of the Brownlow three times.

He finally retired in 1932, at the age of 35, but continued on as playing coach of Hawthorn’s reserves team. And just to show he’d lost little of his competitiveness, he won the VFL’s Gardiner Medal for best player in the reserves competition. He later coached the Hawthorn thirds to a Premiership.

Ern Utting is, rightly, considered a big name at Hawthorn – a brilliant player and an ideal clubman. All of that could have been Collingwood’s, if the Magpies had persevered a bit longer – or had the ingenuity to try him in defence. But his connection to the black-and-white cause didn’t end when he crossed to Glenferrie: his nephew, Charlie, played 125 games for Collingwood in the 1940s. Sadly, Ern didn’t live to see Charlie lift the Copeland Trophy in 1950, having died suddenly in 1948, aged just 50.