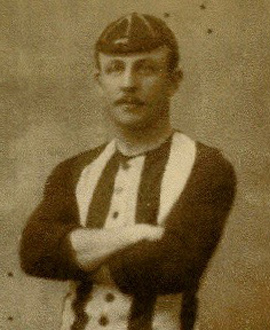 Collingwood has known plenty of policeman-footballers over the years, but none has made a greater contribution to law enforcement than Ernie Ashton.

After his Collingwood career ended in 1895, Ashton would go on to become one of Victoria’s top cops, playing a key role in some of the state’s most notorious criminal cases – including the arrest of Squizzy Taylor – and eventually rising to the rank of superintendant.

But before then he was a highly regarded follower/defender on the football field. A strong man (he was a leading amateur boxer as a young man) who was a good mark and a big kick, Ashton seems to have come across from Carlton in 1892, frustrated at a lack of opportunities there. He slotted straight into the newly-formed Magpie line-up, named as first ruckman in Round 2, and was an automatic selection for the rest of the season, playing 16 out of the remaining 17 games (there was an outcry when he was inexplicably dropped after being listed in the best players on Queen’s Birthday, and he returned the next week).

The Sporting Standard described him as “a redoubtable heavy-weighter” who was a good drop kick. In 1894 The Australasian praised his “fair, manly vigour” and said he was “an all-round player of consummate ability”. “He displayed unstinting exertions, whether in the ruck or in place, and whose skill in handling the ball were themes of constant admiration,” the paper wrote. The Argus agreed, noting: “Wherever the fray was hottest there one noticed the unmistakeable topknot of Ashton in the thick of it, always coming out to advantage.”

Ashton enjoyed a particularly good 1894 season (though he strangely also turned out for Hastings against Frankston in the middle of the year when the Magpies had a bye), but could manage only four games in 1895 and returned to Carlton the next year.

But just as the 1896 season was nearing its end, Ashton started his police career (officer number 4628). He was appointed a horse-mounted constable in his first year of service, and his football career took a back seat thereafter. He enjoyed a distinguished career in the Police Force, becoming known as “No Gun’ for his refusal to carry a weapon.

Despite this he was involved in some high-profile confrontations, including the 1908 arrest of dangerous criminal ‘Darky’ King, two arrests of ‘Squizzy’ Taylor in 1916 and 1919 and a dramatic arrest after chasing the suspect through Bourke Street theatre crowds in 1910. He was also involved in the investigation of the rape and murder of 12-year-old Alma Tirtschke in 1921, in what became known as the infamous Gun Alley murder. He ended up as a superintendant at Sale Police Station, and one of the most highly regarded officers in the state.

In the end, Ernie Ashton’s fame as a policeman far outstripped any he might have enjoyed as a Collingwood footballer. But 55 games in the club’s formative years is nothing to be sneezed at, and indeed ranks him ninth highest for VFA games played for the Magpies. He played many of those with another famous Collingwood copper, giant defender Bill Proudfoot. They must have been a frightening pair for opponents!