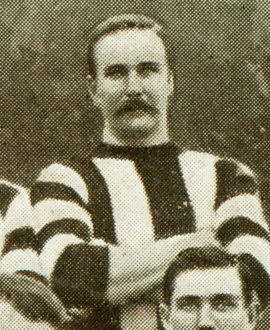 There are different ways in which you can measure how highly a football club rates a particular player. It might be his pay packet, or the trophies he wins, or special treatment he receives along the way.

In the case of Ernie Rudduck, that recognition came in the form of a motorbike.

Rudduck only played one season at Victoria Park, managing 14 games in the ruck and defence during 1907. But so highly rated was he, and so keen were Collingwood officials on having him stay, that the club furnished him with a motorcycle to help with getting to and from his home at Dromana on the Mornington Peninsula.

It’s little wonder the club went to such lengths, because Ernie Rudduck was a seriously good footballer. He’d been made captain of Dromana FC at age 19 in 1903, and played with Richmond in the VFA the following year. His early appearances in defence drew praise from journalists of the day, one of whom described him as “a good powerful player” who showed “fine football.”

By this stage he was regarded as the best footballer on the Peninsula. He performed brilliantly for Dromana, single-handedly changing games with his strong marking, long kicking and generally clever play. He was a big man who played mostly in the ruck or forward at a local level, and he was a star of the competition. He regularly returned to play with Dromana when not playing for Richmond, but it was quickly becoming clear he was too good for the local leagues. He was named in Richmond’s best players when they won the 1905 VFA Premiership. He travelled to Adelaide with the Richmond team the following year and, upon his return, spoke to Carlton and resolved to seek opportunities at VFL level in 1907.

Newspapers reported that he would turn out with the Blues in 1907, but somehow the deal fell through and Collingwood jumped in to snatch the talented big man. Initially, it looked like a great ‘steal’. Rudduck made his debut in Round 5 and played every game for the rest of the season.

His local paper, the Mornington Standard, breathlessly reported on his progress. “Ernie Rudduck, of Dromana, played a splendid game in the ruck for Collingwood in their match against South Melbourne on Saturday,” one report said. “This popular player is thought very highly of by the Collingwood Club, and they have provided him with a motor bike to enable him to be with the team every match.”

One of the reasons Rudduck settled into VFL football so smoothly was his physique. He was relatively tall for the time, around 5’9″ in the old scale. He was also strongly built, with the Standard reporting that he was the second heaviest player on Collingwood’s list in 1907, and that enabled him to comfortably stand the rigours of football at the elite level.

After 14 encouraging games with the Pies, Ernie Rudduck looked set for a good VFL career. He was only 23, and seemed to have a great footballing future. But the lure of home at Dromana seemed too great, and Rudduck turned his back on the VFL – motorbike or none – to go back home in 1908 (after a holiday in WA).

In some ways it wasn’t a surprising decision, because the Rudducks were a famous family on the Peninsula. Ernie’s dad, Nelson, was a particularly important figure. He was one of the pioneers of the Mornington Peninsula, having founded the first general store in Dromana in 1872, and was also the founder of the Dromana Methodist Church and the Dromana branch of the Independent Order of Rechabites. He also founded, and donated the land for, the first Dromana Hospital. He was a local councillor, JP, magistrate and a prominent local identity.

Ernie was the sixth of nine children, and he quickly made his own name in the local community. He was involved in the church too, and heavily involved in local activities. As well as his football he was a good tennis player, played plenty of other sports, and also featured regularly on stage with recitations, songs and even photographic displays. He was treasurer for some local organisations too, and the superintendent of the local Sunday School.

All of this helped make Ernie a local celebrity himself. When he was involved in an accident in 1902 – he was injured when his horse tumbled over some cows lying on the roadway – the subsequent bruising was a story in the local paper. So were his various sporting exploits.

He found himself embroiled in an even bigger story in 1903, when he and his father became involved in a nasty and long-running spat with the Rosebud Mechanics Institute over an organ that had been placed by the Rudducks’ church in the Institute’s hall. Ernie had been sent by his dad to reclaim the organ, some nastiness ensued and Rudduck Snr found himself charged with assault, and later with ‘illegally detaining a piano’. The magistrate ruled the cases trivial and said they should never have made it to court, but nonetheless fined Rudduck Snr a token amount.

Still, the Rudducks maintained a high profile in the local community, and it was to here that Ernie returned after turning his back on the VFL. He followed in his father’s footsteps by becoming a storekeeper himself, and married during Collingwood’s premiership year of 1910. He played briefly with Frankston but mostly remained a Dromana stalwart, playing his last game with them at the ripe old age of 42 and then serving as President.

In 1916 he signed up to fight in the Great War. He spent most of 1917 in France with the 57th Battalion and was wounded in action in October of that year, suffering shell concussion which affected his hearing, and injuries to his shoulder and back. Lance Corporal Ernie Rudduck spent several months in hospital in England, returned to duty in March of 1918 and eventually arrived back in Melbourne in March of 1919. Sadly, his youngest brother, Joseph John, wasn’t so lucky. Having twice been rejected in Australia on medical grounds, he eventually enlisted with the British Army. He lost his left arm in the battle of the Somme, but reported for duty again within four months. He was caught in more fierce fighting in France in 1918 and died, aged 28.

That still wasn’t enough to deter Ernie from signing up again when the Second World War broke out, enlisting at the age of 58! He made it back safely from the conflict too and eventually lived to be 88. He spent 24 years on the local council, including two terms as Shire President, and wound up as President of the hospital his father had founded. As local historian Roger Spaull has written, Ern Rudduck “was a giant within the community of Dromana”. If he had spent longer with Collingwood, his name in footy circles might have been bigger too.