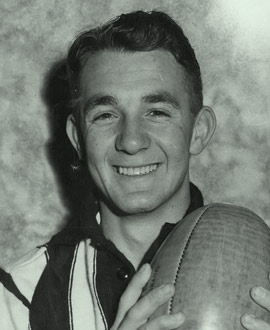 Errol Hutchesson learned quickly about the highs and lows a footballing career can produce.

The speedy youngster starred in his first few games as a rover/wingman in 1958 and seemed destined for long-term stardom. But a stress fracture that became broken leg ended his season after three games, denied him a chance of playing in a Premiership in his first year and established an injury-plagued pattern that would continue to dog him over the rest of his 10-year career.

In the end, the story underlying his 127 games is one of frustration at what might have been – a frustration that was only alleviated when he returned to the club in an off-field role years later.

Errol Hutchesson first came to Collingwood’s notice as a promising schoolboy while he was playing with Jeparit in the Wimmera league. The Magpies tried to get him down in 1957 but they couldn’t prise him away. By 1958, however, he was ready to move to the big smoke. After just one practice match, the club could barely hide its excitement at what they had found.

“Hutchesson from Jeparit gave an outstanding display as rover and forward pocket and looks capable of justifying the high opinion our officials have of his capabilities,” wrote the club’s practice match newsletter.

He continued to star in the next matches and walked straight into the team for the first game of the year, against Footscray at the Western Oval. He would recall later how early doubts about the quality of his opponents evaporated when the great Ted Whitten soared over him to pluck away a mark he was sure was his. Further good games followed against Hawthorn and Fitzroy, and Pies fans were convinced they had found their next great small man.

The most noticeable thing about Errol’s play was his great pace. On the open wings or around the ball his speed could be devastating, aided by good skills and reasonable ball use. Unusually for the time, he was a player who loved to play on at every opportunity, to keep the game moving. Sometimes that would lead him into trouble, but it was hard to argue with the impulse. He was also very handy around goals, once nabbing five in a game and several times finishing with bags of three.

On the flipside, though, Errol was very lightly built. And while that didn’t stop him from heading into packs (the club would later say, “A most fearless player, Errol’s determination to be first to the ball irrespective of the size of his opponents has resulted in him sustaining painful injuries”), it meant he wasn’t particularly durable. And it would be the latter characteristic that would repeatedly disrupt his career.

After that third game and already becoming a fan favourite, Errol felt extreme soreness in his leg that was eventually diagnosed as a stress fracture. He was sent back home to Jeparit with his leg in plaster. On his first night back at training he broke a bone in the same leg to end his season.

He moved to Melbourne full-time in 1959, and began a career that year with the Victorian public service that would later see him rise to a number of senior positions. But he could never string a full season together on the field: there were 14 games, then 16, then 13, then 11 … there was always another injury to interrupt his stride. But he never thought of trying another club to change his luck. “Ten games a year at Collingwood are worth more to me than 18 with any other club,” he told one newspaper in 1965.

That looked like being his last year when, after yet another injury-enforced layoff, he spent enough time with the reserves that he was able to lead them to the flag. But he was back again with 16 games in 1966 (he polled the most Brownlow votes of any Magpie that year and was on the wing in the Grand Final), closing out his career with 13 more in 1967. He then crossed to Prahran in the VFA with former teammate Kevin Rose, and the two would play in a flag with the Two Blues in 1970.

But his days at Collingwood weren’t quite over yet. He returned to the Magpies’ board as one of the directors in 1986 and would continue serving in that capacity for 11 years.

That meant he was actively serving the club when the famous 1990 Premiership Cup returned to Victoria Park. After missing out on the chance to play a role in 1958 and 1964, and having been on the end of losses in 1960 and 1966, it’s hard to argue against the idea that Errol Hutchesson deserved that one last, lucky break.