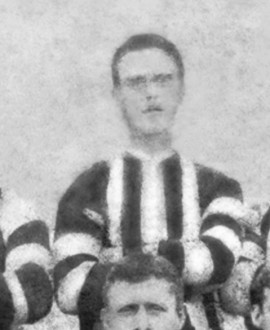 The exotically named Fairleigh Bernstein only played a single game with Collingwood, but his life story held as much, if not more, interest than the footballing version.

He was born in 1876 to Jacob Bernstein and Rachael Marks, both Jewish migrants, in Drummond St Carlton. His father was from Russian Poland and came via New Zealand, while his mother came from the USA. Fairleigh was the third son of five boys and one daughter. His oldest brother Henry Lawrence Bernstein gained international notoriety in 1936 as the central figure in the Dum Dum bullet scandal between Italy and Britain, and in time was revealed to be an international man of mystery, a secret agent, an adventurer, a military revolutionary soldier in many theatres and a mining expert.

Fairleigh’s own story was a little more routine. He grew up in East Melbourne, where his father was a jeweller. In 1894 he played around seven games in defence for Carlton, quickly attracting positive reviews. Punch described him as “a strapping young fellow, particularly favoured by Nature with many of the essentials required”, and encouraged the Blues to persist with him despite early mixed form.

The Australasian described Bernstein as an “active and reliable defender” during his time with Carlton. The Argus, after one match in which his game was described as “beautiful”, noted that high marking was his speciality. At just under 6 feet in height he was unusually tall for the time, and he used that height to advantage,

With a strapping physique and obviously a fine high mark, it was little wonder that the Magpies took notice after Carlton released its hold on the youngster at the end of the 1894 season. They brought him into the team for the Round 4 match against Richmond in 1895 – and once again his strong suit stood out.

The Age commented on his Magpie debut, noting that his high marking had been excellent. The Argus agreed, but added an important – and damning – qualifier: “Bernstein went up for marks like a footballer, but his kicking was poor.”

And that seems to have been the thing that killed his career. He was named in the squad several more times during the year but never added to his one senior game. By 1896, with the Pies an increasingly strong side on the way to a Premiership, he became a regular with Collingwood Juniors.

It’s unclear if he played any further football after that. He was a traveller and ran an Importing business. He lived in New Zealand for a time, getting engaged in 1900 to a South Australian girl, but eventually married a Melbourne girl in 1903. They had a child in 1905 (the same year in which he once again came under public notice after he was assaulted while watching a footy match at Princes Park between Carlton and Brunswick in 1905).

In 1914, his company, Bernstein & Co Indentors, suffered a major setback when fire engulfed the top two floors of the building they occupied, destroying everything and triggering an insurance claim for 250 pounds. They were able to resurrect their business as crockery importer merchants, but that ended when Fairleigh enlisted in May 1916.

By this stage he was 40 (although his enlistment papers listed his age as 41 years and 11 months) – evidence of a remarkable determination to serve his country. He joined up with the 15th Reinforcements, 21st Battalion, and embarked for England aboard the HMAS Shropshire, where he was assigned to the 6th Signals Battalion after a term in hospital with mumps. In September 1917 he was promoted to Corporal and attached to the Pay Corps in London. In 1918 he seemed to struggle with illness, spending several periods in hospital with rheumatism before returning to Australia in 1919 as a Sergeant in the Canteen Corps.

In 1920, he and several of his family decided to change their surname to Benson, perhaps following the trend to anglicise from German-sounding names. At the same time a cousin also changed names to Burnett. For the next several years he was listed as a traveller, occasionally a clerk or salesman. He continued to pursue his interests in singing and theatrical performance, was a reasonable billiards player and a cyclist of some note.

In September 1928, having fallen on hard times, he was convicted of embezzling from his employer (ironically another Collingwood identity, Dan Reddan). Fortunately the magistrate only sentenced him to a suspended six-month sentence, recognising “severe ill health and pressure of necessity” as the cause of the crime.

Unfortunately the reprieve was a relatively brief one, and Fairleigh Bernstein/Benson passed away just three years later, at age 54, after an extended period of illness.