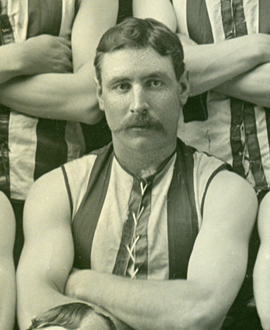 Collingwood was blessed with a wealth of riches when it came to big men in the late 1890s and early 1900s. Bill Proudfoot and Jack Monohan attracted most of the attention in defence, but Frank ‘Charger’ Hailwood – whether forward or in the ruck – was just as valuable to his team, and played  a key role in two Premierships.

Hailwood was born in Alexandra and his family stayed there until Frank was at least 14. They moved to Melbourne sometime after that, and he first came under the notice of Magpie eyes when he played for the newly formed Collingwood Juniors in a practice match against Collingwood seniors in 1893. He became a regular with the Juniors that year, and by the end of it had established a great reputation as one of the most promising youngsters in the game. He was keenly sought by a number of clubs, but the Magpies won the race.

It was no surprise, then, that he made his senior debut in the opening round of 1894, playing at half-back against Geelong. And he instantly won rave reviews, with observers lauding his marking in particular. One newspaper described him as a “fine big fellow” and noted he’d beaten Geelong’s Houston, their captain for the day. “The manner in which the junior, Hailwood, outwitted Houston time and again stamped him as a more than average man,” wrote The Leader. “Hailwood’s high marking is a treat to see,” wrote The Herald. “When he’s a fully fledged Magpie, they say he’ll fly higher than any of the birds down that way. He goes up like a rocket.”

He played every game in his debut campaign, but stunned the Magpies at the end of the season by leaving to play and work in Rutherglen in 1895. Luckily he returned halfway through the season and took up where he had left off, resuming what turned out to be a magnificent career.

In the years to come he would be regarded as one of the best big men in the game, mostly following but sometimes stationed forward and occasionally in defence. He was tall and strongly built, a magnificent mark in the Monohan mould, and a thumping if sometimes unreliable kick. He was also tireless, often working himself into the ground in aid of the Collingwood cause.

“Hailwood’s marking in front of goal  was a feature of the game, but his kicking was poor and his judgement in passing poorer still,” wrote one paper after one of his early games back in 1895. Another wrote: “Hailwood’s magnificent marking equalled that of Monohan’s. Took many fine high marks and was the personification of unselfishness, many a time passing the ball to a friend when he would have been perfectly justified in taking a kick on his own account.”

The Argus was even more effusive after one game in 1899 when his back-up ruckman had been injured early, leaving the Pies one short. “The big fellow has never shown such form. His height, weight, and strength all told in a game in which both sides were playing for keeps, and in which there was little or no time for flashness. Hailwood has no pretensions to being a fancy player. In the ruck he beat everyone, and with the impossibility of being able to take a spell Hailwood ran on until he could run no longer.”

A reporter from The Mercury was at the same game: “Never did a man show out more brilliantly than Hailwood. The star of the 36, on losing his mate he doubled his efforts, and in spite of the roughest of treatment he played a meritorious game, quite eclipsing anything ever before attempted, bringing forth the plaudits of the great crowd at his grand achievements.”

“Charger Hailwood only plays for keeps,” added The Mercury. “He is a real snorter when warmed up to it.”

Remarkably, as the 1890s turned into the 1900s, ‘Charger’ was able to take his game to yet another level – especially in the big games. First he was the Magpies’ best player in a losing effort in the 1901 Grand Final against Essendon: “Hailwood has rarely ever performed in such great style,” wrote the legendary football figure Jack Worrall in The Referee. “He kicked better than usual, marked grandly, and his great strength carried him through many a crash.”

But ‘Charger’ went one better in a winning team in 1902, being very close to best on ground: “The giant Hailwood, in the ruck, was a performing prodigy for the Magpies,” wrote Worrall again. “There was no stopping Hailwood in the ruck. He played, as he always does, scrupulously fair, but he was too big and strong, and the Essendon followers were wearing themselves down in their futile efforts to checkmate him.”

Markwell in The Australasian agreed: “If one individual member of the company has done more than any of his fellows towards beating opposition teams, that one is certainly the big-hearted, strong limbed and amiable young giant, Hailwood, whose play in the ruck has in every match been invaluable. I would almost style him the finest follower of the year.”

By this point, as Markwell had suggested, Hailwood was regarded among the very best followers in the game – arguably the best, as evidenced by his selection for Victoria against South Australia in August. So Magpie fans were mortified when he decided to move to WA in 1903 and play with Boulder City. He returned to Victoria Park in 1904 but seemed to have lost a yard in pace and was never quite the same player again, managing only five games towards the end of the season before retiring from the VFL.

He was back in WA with Subiaco in 1906, playing footy with his brother John (who would later be killed in the First World War) and working at an iron foundry. He returned to Melbourne later, settling in Collingwood and working as a driver. He doesn’t seem to have married.

Frank Hailwood died in 1944, and the pallbearers at his funeral included former teammates Jock McHale, Ted Rowell, Archie Smith, Bob Rush and Charlie Pannam Snr, as well as legendary trainer Wal Lee. That line-up alone speaks volumes for how highly regarded and respected he was: forty years after he’d finished playing, the club’s biggest names of the era wanted to pay a final tribute to a teammate who so often carried the Magpies’ following division on his own broad shoulders. It seems like a perfect, and entirely fitting, farewell.