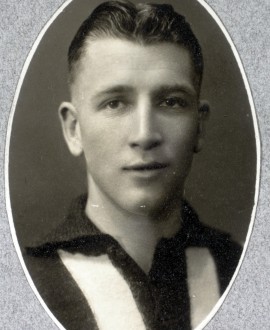 Frank Kelly’s story is the classic sporting tale of the flawed genius who could have been anything. In a different era, or with a different temperament, he was a player who might just have been a champion.

He was born in Richmond but brought up in Abbotsford (where he lived a few doors down from the girl who would eventually become his wife) and was a talented boy soprano. One day he was spotted playing footy with mates in a park and was invited to play with Collingwood seconds.

After his senior debut in 1930 at the age of 20, Collingwood thought they had unearthed a star in the tough, speedy wingman. “His first play was like that of a champion winger”, wrote the Sporting Globe, “and compliments were showered on him in the dressing room.” Later in the season the newspaper said: “He is a coming star … Collingwood seems to have acquired a wingman of real skill. Kelly’s pace, marking and general tricky play led his opponents a merry dance.”

Kelly managed 12 games in that debut season, including a final, but missed out on selection in the historic Grand Final that gave the Pies their fourth flag in a row. After seven more games in his second season, Kelly took a position as coach of Beechworth. He returned in 1933, played 15 games and won the Austral Cup as the most popular player, but then left again, this time for Melbourne when more money was offered. He subsequently spent time with St Kilda (briefly as captain) and Essendon, eventually totalling 116 VFL games in a career that spanned four clubs and 15 years.

Frank Kelly was one of the most colourful characters of his era. He loved sport, loved a beer (at one point he managed to combine two of his great passions by playing footy for a brewery team on Saturday mornings), loved a punt and trained greyhounds. But he could be volatile and headstrong, and had a way of polarising opinion. He loved footy and was still playing well into his 40s, by which time he’d moved to the Latrobe Valley. Then he took up umpiring, and is still remembered in those parts as a legend for his umpiring exploits – most famously the day he forgot his role and marked a player’s kick – and for regularly having a beer at half-time.

In between some of his VFL stints he coached Port Melbourne to a flag in 1940, winning praise for his strong, ruthless and astute leadership. In the book Game For Anything, Tommy Lahiff recalled that Kelly was “a great bloke who’d do anything for you, but he used to get into trouble. He was one of those blokes who either had the lot or he had nothing.” On the eve of the 1941 finals, Kelly rocked the club by asking for an immediate pay rise. They refused and Kelly was sensationally forced to resign. The club went on to win the flag anyway.

Brilliant, enigmatic, frustrating, a personality. Frank Kelly was all of those. But he could sure play football.