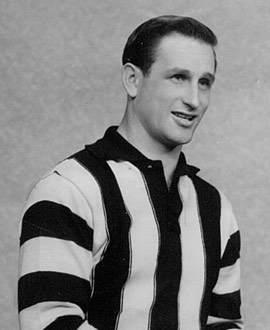 Suspensions or injuries to key players on the eve of the finals have provided football with some of its most dramatic moments. At Collingwood, for example, we still talk about Phil Carman’s suspension in 1977, Anthony Rocca’s ban in 2003 and the busted shoulder that cost Alan Richardson his chance in 1990.

But it is hard to imagine a story more heart-breaking than that of Collingwood’s tough and loyal half-back Frank Tuck. He missed out on playing in a Premiership side not just once but twice – the second time as captain.

The first of these dramas came in 1953, when Tuck fund himself going toe-to-toe with the Bulldogs’ crack spearhead Jack Collins. Both got four weeks from the tribunal, forcing Tuck to miss the finals and the historic 1953 flag.

In 1958 Tuck had enjoyed a typically determined, consistent season, his first as captain. But in the third last game of the year against Carlton he tore a thigh muscle and was immediately locked in a race against time to be fit for the finals. The improvement was gradual but marked, and by the Thursday night before the grand final Tuck gave himself a good chance.

Coach Phonse Kyne put Tuck through an exhaustive session. He came through with flying colours, and was a relieved man as he chatted to the coach in the middle of the ground after the run. As he was heading to the showers Kyne called on Tuck to have one more sprint up and down the ground. Half-way down the return leg of his run Tuck felt the muscle tear, and with it went his hopes of leading his side to a Premiership.

There is no greater prize in football than to be part of a Premiership team. To be denied that chance once was bad enough; to miss out twice in such circumstances was beyond cruel. It was something that hurt Frank Tuck for the rest of his life.

“Missing ’53 was bad enough, but what happened in ’58 was my biggest disappointment ever in football,” Tuck said in 1991. “I was probably only seconds away from getting through the training run. I reckon what happened was that it (the muscle) cooled down while I was talking to Phonse – and that wouldn’t have happened in a match. Every time I think about it I just about cry.”

Frank Tuck was the central component in one of the most famed half-back lines Collingwood has ever known. Flanked by Ron Kingston and Peter Lucas, Tuck was a powerhouse in defence.

When Tuck was recruited from Strathmerton in the Murray Valley League as an 18-year old, Collingwood held hopes for him as a key forward rather than as a defender. It was in attack that Tuck had played much of his football in the country, and where he had attracted attention from a couple of umpires. They suggested he was good enough to play football in Melbourne, but their advice fell on unreceptive ears. Frank had been to the city once and did not think much of it.

A little later, however, Tuck was doing some claybird shooting at Cobram when he bumped into former Collingwood centreman Marcus Whelan, who told him he would be “mad” not to have a go. This time Tuck heeded the advice, and he was soon on the train to Collingwood for the last couple of practice games of 1950. Also arriving in Melbourne by train that day was another youngster with similar hopes and aspirations, Thorold Merrett.

The two recruits were put up in a city hotel, and both ended up being included on the senior list. Tuck debuted on the bench in round three against Carlton, but played only the next game before injuring a thigh muscle, missing many matches and returning via the seconds.

In those days Tuck was playing mainly as a half-forward, with occasional spells on the ball. At 183cm (6 foot) and 82.5kg (13 stone), he was well suited to a variety of positions. He was immensely strong for his size, with massive forearms and shoulders that often served as battering rams in packs. He was a tireless worker, quite quick, a strong mark and a long kick.

By 1952 Tuck’s versatility saw him tried in defence, and it soon became clear that his straight-ahead style of play was ideally suited to the task. Initially he was played on a half-back flank and later moved into the key half-back post, with Lucas and Kingston alongside. Tuck was regarded as the tough guy of the famous defensive triumvirate, a rugged footballer who was respected by teammates and opponents alike. “He was a very aggressive player who went straight through – it didn’t matter who or what was there,” said Bob Rose.

Harry Sullivan said Tuck was one of the fairest tough players he ever saw. “It didn’t matter what was between him and the ball, he just didn’t deviate.” Thorold Merrett agreed. “He was raw-boned tough,” he says. “He didn’t fear anything – and he didn’t see anything other than the ball.”

Once Tuck found his niche in defence there was no stopping him, and he became one of the club’s most dependable and reliable performers, regularly playing on and nullifying taller opponents.

Tuck missed a number of games through injury, his most serious being in 1954 when he missed many matches after severely tearing ankle ligaments, and on another occasion when he severed the tendons in his thumb while working as a butcher. When he played, however, he was a wonderfully consistent contributor. He was regarded as a great encourager of his teammates, especially younger players, and his fearless, uncompromising style of play won him their respect. It was these qualities which led to Tuck in 1958 becoming the first committee-appointed captain in the club’s history (prior to that captains had been chosen by the players).

Tuck spent two years as a strong and respected leader before retiring (along with Lucas and Kingston) and heading back to the country as he had always intended. He enjoyed a successful coaching career in the country for many years, before settling back into life at Corowa on the NSW side of the Murray. The return to the bush enabled Frank to pursue one of his other great sporting loves: owning and training a team of trotters. He also made a name for himself in country cricket, once scoring 263 not out over two days for Birchip in a final.

Missing out on one Premiership is hard on any player, but nobody should have to endure such pain twice. That is especially true of someone who played football the way Frank Tuck did – with honesty, guts and total commitment to the Collingwood cause. He deserved a far better reward.