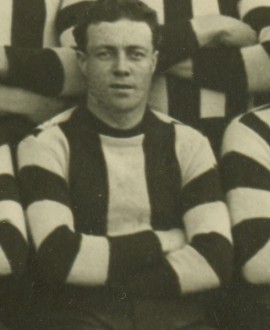 For Fred Fielding, it must have seemed like a good idea at the time. Early in 1910, the Quarry Hill-born boy who had been doing well in the Bendigo football competition was invited to try his luck with Footscray. The 20-year-old played a couple of games, disappointing in his first and showing promise in his second – but not enough promise for the ‘Scrays to keep him around. He returned to Bendigo, intent on resuming his local career with South Bendigo.


But his little sojourn to the city cost him dearly. Players in Bendigo had until recently been able to play both locally and with VFA/VFL teams without clearances. Those rules, however, had changed – unbeknownst to Fielding – and he had technically crossed to Footscray without a permit. So when he tried to cross back to his old club, the Bendigo Football Association refused to give him a permit. He reluctantly took to umpiring instead.

Luckily the BFA relented in June (because Fielding “was only a young fellow”) and allowed him to return to the field. He was quickly back to his best, starring for South Bendigo with clever, consistent play and searching runs out of defence. He played an “exceedingly fine game” against St Kilda for a Bendigo team late in the year, and the Saints were reportedly keen to secure his services for 1911.

Instead he ended up at South Melbourne, but once more the move to the city did not reap dividends: he played just the one game, against Collingwood, and once again headed home. His dreams of a career in Melbourne seemed to have disappeared.

But his 1912 season changed all that, with the Bendigo Advertiser proclaiming him the ‘Champion Player of the Season’ in the Bendigo Football Association that year. “He is the best all-round footballer in the district,” the paper said. “The player is cool, clever and tricky and when at his best is most entertaining to watch.” He won South Bendigo’s best-and-fairest that year too.

So it was no surprise when Collingwood gave Fred Fielding another crack at the big time in 1913. And this time he didn’t let the opportunity go begging. He became a regular for the Pies that year, playing 17 games and kicking 10 goals. In just his third game ran the ball the length of the field against Essendon. The Argus said he regularly did “first rate things”, and praised his “exceptionally clever play”. He was a versatile player, capable of playing in defence, forward or on the ball. His kicking was a highlight, and his ball-handling was sure and reliable. He was named among the Pies’ best players in their losing semi-final to Fitzroy. He had, it appears, done more than enough to secure a long-term VFL career.

But for reasons unknown, that’s where his career ended. Fielding instead headed to Echuca to take over as captain-coach (a job that was initially offered to former Pie Paddy Gilchrist, but his permit from Prahran was refused). He also spent more time umpiring, as this report from the Cohuna Farmer’s Weekly confirms: “F. Fielding, the central umpire at last Saturday’s Cohuna football match against Wee Wee Rup, won general praise for his superior style of making decisions, and by his strict impartiality. He gave a remarkably large number of free kicks, but these were necessitated by his evident determination to make the men “play the game,” especially with regard to the unmannerly habits of “holding the man” and “holding the ball.”

“Another excellent feature of Fielding’s umpiring is his practice of openly announcing the name of the offender and the name of the offence when making his adjudications, thus disarming criticism on the one hand, and stimulating and educating players to a higher level of performance on the other.

“Fielding is himself a footballer of metropolitan repute, and played for Collingwood last year.”

In 1915, remarkably, Fielding returned to the city to give VFL another try. He was cleared to Carlton, but never played a game there. By midway through the year he was in army training camp at Seymour and readying himself to head to the Front. His last footballing service was to play for a combined ‘Camps’ team that played against Carlton the week after the Blues had won the Premiership. He played forward, kicked four lovely goals and showed he’d lost none of his knack for being in the right place at the right time on a footy field.

Strangely, even though he’d already been in camp, Fielding didn’t officially enlist until April 1916. And he did so from Perth. To make things even more confusing he enlisted under the name ‘James Gleeson’ (Gleeson was his mother’s maiden name). He spent time in both France and Belgium, and was wounded in action (suffering a severely fractured shoulder) in September of 1917. He returned to service and rejoined his battalion in France in May of 1918, but was killed in action at Villers-Bretonneux in August of that year – just three months before armistice was declared.

Fred Fielding’s poor family was initially told he’d been wounded in action a second time, before getting the worst update possible a short time later. All that came back of his personal effects were a prayer book, a YMCA wallet, some cards and one letter.

A year after his death, his heartbroken family placed the following notice in The Age:
The hardest part is now to come,
When all the boys are returning.
We miss among the happy throng,
Dear Fred, who will never return.