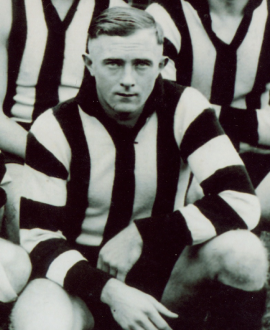 It isn’t unusual for footballers to be highly skilled at other sports, but in Freddy Froude’s case, his proficiency at basketball very nearly cost him a League career – and three Premiership medals.

Froude was a star basketballer, one of the cleverest forwards in the country and the best goalthrower in the YMCA competition. But his basketball training of evading a man rather than making contact led some at Collingwood to doubt his courage. Teammate Bruce Andrew, himself a basketballer, said: “He was almost a failure, for his sense of evasion – so vital to basketball – was useless to him on the Collingwood forward line. He just could not go in and get the ball … He did not fit. In fact, it was whispered that he was timid, but those of us who knew Freddie laughed at that.”

As a footballer, Froude seemed a natural forward. His evasive skills, cleverness and deadly left-foot kicking seemed ideally suited to life near the goals. In 1931, after a game against Melbourne in which he kicked four goals, The Herald said: “He knows how to make position, and though not tall marks well, because of his judgment of the flight of the ball. A dashing ground player, Froude has the natural turn for a left-foot kick, and is accurate in his shooting for goal.”

He kicked a bag of six the following week against North Melbourne, on his way to a respectable 30 for the season. But he struggled in 1932, finding himself in and out of the side, after which he was tried on a half-back flank – and the transformation was remarkable.

Suddenly, Collingwood discovered it possessed a wonderful attacking defender: solidly built, with great judgement, calmness and superb anticipation. He was a good mark for his size, always seemed to have plenty of time on the ball and his long, raking left-foot kicks remained a major weapon. He was regularly praised by the press for his “brilliant, dodging runs” out of defence and his precise bouncing of the ball – but also for quickly returning to position and giving his man no room.

He became one of the club’s most consistent and reliable defenders in the 1930s, rarely putting a foot wrong. “Freddie is a real tight defender,” wrote The Sporting Globe. “He gives nothing away. He never allows a forward the slightest latitude. Froude has all the dash he wants and he uses it but only up to 10 yards. Like a flash he finds a forward over a short or a long distance and he rightly prefers the longer kick, then back he goes on guard. No half-forward gets too far from Froude. He is never rattled, gathers his pace in a stride, is safe rather than brilliant in the air, and above all never wastes an opportunity nor allows his opponent a liberty.”

He didn’t miss a single training night in his 10 years at Collingwood, finished third in the Copeland in 1933, won the Austral Trophy for most popular player in 1936, played in Premierships in 1930, 1935 and 1936 and was the team’s best in a losing cause in the 1937 Grand Final, described in one newspaper as “a hero in defence”.

A broken jaw disrupted his final season in 1939, and he joined Kew as playing coach the following year, followed by a similar role at Brighton. His interest in coaching was clear even then, and that path was completed when he got the top job at St Kilda in 1948, a post he held for three years.

One of the highlights of Froude’s VFL career was when he filled in as captain a few times when both Colliers were missing in 1938. Nothing would have made the quietly spoken, unassuming, soft-hearted Froude happier than that, for he was Collingwood through and through. Hec de Lacy, in The Sporting Globe, wrote that Froude was “one of the most popular and likeable chaps in football”. He lived in Turner Street, within punting distance of the ground, for almost his entire life and was still there when he died of throat cancer in the late 1970s. He managed the tennis courts at the ground with his mother, and for many years she also boarded country footballers coming to Collingwood. He was a carpenter by trade and built a magnificent bedroom suite for his brother George as a wedding gift. A little like his reputation as a fine footballer, it survives in perfect order to this day.