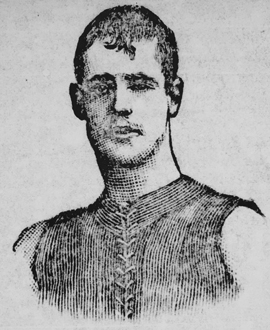 When Essendon champion Albert Thurgood, Fitzroy’s brilliant Jim Grace and Port Melbourne’s Billy Fraser gathered for a goalkicking contest at the Exhibition Grounds in Melbourne early in 1893, the football world was abuzz: which of the three champions – three of the top four goalkickers in the game in 1892 – would be crowned the best shot for goal in the game?

In the end, it was none of them.

Instead, an unheralded Collingwood forward named George Anderson took the honours, nailing five out of his six shots for goal. As The Hobart Clipper reported: “The Collingwood Club, however, had a joker up their sleeve m the person of G. Anderson. This player, who is better known as ‘Splinter’ Anderson, gave the spectators a rare treat in goal-kicking, and from six attempts at 40 yards he potted five goals.”

Funnily enough, this little episode sums up much of the career of George Anderson. Because here was a guy who showed himself capable of regularly kicking goals wherever he played football, yet always seemed to struggle for respect within the football world. As one country scribe put it in 1895 when George was playing at Rutherglen: “He is a great goalkicker but a poor player”.

George Anderson, universally known as ‘Splinter’, was an old-fashioned goalsneak. His only job was to steer the ball through the goals. As one newspaper put it: “Anderson is literally a goalsneak. If he fails to sneak a shot he has a poor chance of getting it any other way.”

He wasn’t a great mark, or particularly fast, or sublimely skilled. But he was good at making space, and was an outstanding kick for goal. If his Magpie teammates could get the ball to him then he was every chance to score. In an era where goals were ridiculously hard to come by, you’d think that would have made Anderson one of the most valuable players in the game.

Collingwood certainly saw him that way. He debuted in the fourth game of 1892 and scored at least one goal in each of his first five matches, going on to jointly top the club’s goalkicking list with 12. In his three seasons at Victoria Park, after joining from the Port Melbourne-based junior club West End, Splinter averaged nearly a goal a game – a great return for the time (42 goals from 51 games).

His 1893 season was his best – 20 goals from 19 games. The Magpies were at times criticised for going to Anderson too frequently during this period, prompting a note in The Herald one night saying: “Splinter Anderson says that they have played to him long enough, and now he intends going in for high marking. Good lad Splinter: shake ‘em up.” The same paper also reported that he was doing some private training to improve his speed, and was wryly hoping to be known henceforth as ‘Sprinter’.

Whatever he was doing that year, it worked. He kicked four goals – a career-best – against North Melbourne in one game, would top the club’s goalkicking list and sneak into the competition’s top 10.

He was less effective in 1894, notching only 10 goals for the year, but it was still a surprise when he was cleared to Port Melbourne for the 1895 season. The development and emergence of the great Archie Smith, a much more rounded footballer, may well have had something to do with the club’s willingness to release him.

Whatever the reason, there was much anticipation when the Magpies were drawn to play Port in the opening game of 1895. Remarkably, he failed to show up. As The Argus explained: “Port Melbourne were to have played Anderson, formerly of Collingwood, but when the time came Anderson could not be found, some of the barrackers satirically conjecturing that he might have slipped through a crack in the floor of the dressing-room. He ended up disappearing to Rutherglen, where he had found a job, but hadn’t bothered to tell anyone.”

So yes, the elusive forward ended up playing the 1895 season with Rutherglen, during which he won admiring reviews for his goalkicking but not his general play. He was still chosen to appear in intercolonial game between the north eastern district of Victoria and Riverina of NSW (for Collingwood teammate Jasper Barclay, by then also with Rutherglen, played in that game too).

He returned to Melbourne at the end of the 1895 season, and there were rumours he would strip for Beechworth Wanderers in 1896. But instead he appeared with Port Melbourne, where he showed he had lost none if his goalkicking skills by kicking eight out of his team’s 11 against a junior opponent in a practice match. He would end up playing 15 games for Port that year, without quite returning to his best.

‘Splinter’ was obviously something of a character in the game, and references to him appeared frequently in newspapers throughout his playing days with both Collingwood and Port (and even Rutherglen). But for reasons unknown, he largely disappeared off the map after 1896. There are a couple of references to an Anderson with Port in the first few games of 1897, but they also dry up after a few weeks. So the latter stages of his story, both on and off field, remain a mystery.

Nonetheless, that shouldn’t detract from his overall impact during his time at Collingwood. George Anderson might not have been the complete footballer, but he certainly knew where the goals were. And as any footy fan will tell you, that’s a pretty important place for a forward to start.