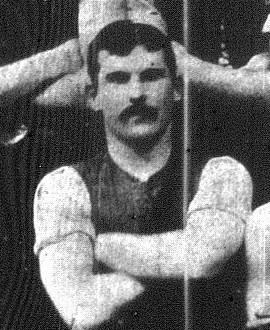 The man who captained Collingwood in its first ever game of senior football was never officially the club’s captain – but there’s plenty of strong arguments to say he should have been.

George Watt was a giant of Tasmanian football in the 1880s and 1890s. He was one of three Tasmanian recruits cleared to the Magpies shortly before the new club’s debut in May of 1892. And so highly was he regarded that, despite his late arrival, the players picked him to fill in as captain when the elected captain, Joe Delahunty, fell ill and missed the first weeks of the season.

They could not have asked for anyone better to lead them in those early days. He was vastly experienced, universally respected and a fine, strong player. In short, he was the ideal leader for a young and inexperienced group.

Watt, known widely as ‘the doctor’, was educated at Hobart High School, and showed outstanding form as a young footballer. After playing for the High School team he joined the City club, where he quickly made his name as a vigorous half-back player renowned for his “robust methods of play”. He played for Tasmania on a number of occasions, and was a member of the first State team that visited the mainland in 1890. He’d already spent 11 years at the highest level by the time he arrived at Collingwood, and quickly won fans in Victoria too.

His form in that first season was outstanding. An analysis of newspaper reports of the day reveals that he would have been rated Collingwood’s best player of the 1892 season (he was retrospectively credited with this honour in 2017). He continued that form into 1893, and the early weeks of 1894.

“Watt’s work in the ruck was beyond praise,” noted the Argus in 1894, “and to see a man after 13 years of football with twice the elasticity of a junior and ten times his average pluck and determination is indeed a marvel.”

‘Old Timer’, writing in the Referee in 1915, recalled Watt’s qualities as a player, and a teammate.

“I played against him on many occasions, and found him a first-class fellow,” he wrote. “Gritty, vimful, a fair mark and good kick, he was useful in any position on the field, though he usually played back and in the ruck.

“There was no guile in his composition, and hard bumps are only what healthy and sturdy footballers should expect. The personification of neatness when kicking, he possessed a safe pair of hands, but his marking was impaired through shortsightedness. A stubborn back and dashing; if unable to mark the ball himself, he took all sorts of care that the forward he was in charge of would not be given much of a chance to do so. With a bound resembling that of a kangaroo, G.W. would come from the back, knock the ball forward, catch it on the bounce, and — hey, presto! — it would be past the centre line in the twinkling of an eye!

“G.W. was splendidly proportioned, possessing the shoulders and limbs of a heavyweight wrestler, and being as active as a kitten. For one so sturdily built he had a fair turn of speed; in fact, George disported himself on the running tracks and managed to scoop in some prizes.

“He liked to be in the ruck, and therefore in the thick of the battle. Like Kipling’s heroic Gunga Din, ‘he didn’t seem to know the use of fear,’ and nothing so delighted him as to come across an opponent willing to ‘mix- it.’ I do not mean to infer that George was quarrelsome. Far from it. But he had to find an outlet for that superabundance of vitality and physical strength, and he dearly loved to ‘rub shoulders’ with a husky opponent, with a view to ‘the survival of the fittest’.”

Unfortunately, there was one thing that stopped George from reaching the truly elite level as a footballer, and that was something about which he could do little – his eyesight. He was terribly shortsighted, and that affected his marking, in particular. “With better eyesight, this merry fellow would have been quite one of the best footballers the ‘tight little island’ has produced,” noted the Referee in 1909.

Besides experience, strength and football ability, the other thing that George Watt brought to Collingwood was a great capacity for engendering team spirit. He was widely lauded by former teammates as ‘the life of the party’.

“George Watt was one of the merriest of the old-timers,” wrote ‘Old Timer’. “He was so full of fun and up to all sorts of tricks. On the memorable trip to Sydney in 1890, George was one of the mirth-makers of the party.” The Hobart Mercury concurred, in 1908: “Bubbling over with animal spirits, George was a merry fellow and is probably the same today. The old merry twinkle was in his eyes, and I am sure he will never reach an age when a joke or a prank will not appeal to him.”

He was also, it seems, an extremely well dressed gentleman. “Had Beau Brummel been living a quarter of a century ago he would have bumped into a ‘foeman worthy of his steel’ in George,” noted the Referee. “The Doctor … was always immaculately dressed, and his fine upstanding figure made him an excellent advertisement for his tailor.”

George’s stint at Collingwood lasted just over two years. After a couple of games of the 1894 season, he returned to Tasmania to start a hair dressing and tobacconist business that would become one of the most famous in Hobart and last for decades, eventually being passed onto his son, George Jnr. He returned to playing football, too, and seemed to have lost none of his passion for the game, many newspapers noting how his game had been improved by his stint with the Pies.

So admired was he by all at Collingwood that, when he left, he was presented with a number of ‘testimonials’ (gifts of money), and T. W. Sherrin gave him with a punching ball.

The admiration was not only mutual, but also long-lasting. When Collingwood visited Tasmania in 1929, Watt was guest of honour at a special function. He spoke of his pride at leading the Pies onto the ground in that first match against Carlton in 1892, and said he’d followed the club’s fortunes with keen interest ever since. It transpired later that George had been scheduled to have an operation that day, but abandoned it when he learned his old team were coming to Hobart. “No doctors or anesthetics could prevent him from meeting members of his old club,” remarked the Mercury.

But it wasn’t just football where George Watt was a major figure. He had been a star athlete, winning a number of Sheffield handicaps, and later held several executive positions with the Tasmanian Athletic Association, a body which conducted professional foot-racing and wood chopping in Southern Tasmania. He also took a keen interest in horse racing and trotting, and became chairman of the Tasmanian Trotting Association. He organised and numerous sporting carnivals and also donated trophies to many different organisations.

All of these organisations, as well as the Tasmanian Premier, Attorney-General and Hobart’s Lord Mayor, were represented at George’s funeral in December of 1934, in what turned out to be one of the largest funerals the State had seen. He had been a father figure and supporter of so many sports in Tasmania. The next year, the Tasmanian Football League renamed its award for best and fairest player the George Watt Memorial Medal. In 1945, when district football was introduced, the George Watt Medal became for best and fairest in the seconds league.

George Watt’s time at Collingwood was relatively brief, but we were lucky to have him. He played a significant role in those heady early days, and maintained a connection with the club for the rest of his life. And for the Magpies, he will always be remembered as the man who led us into our first ever game as a senior football club.