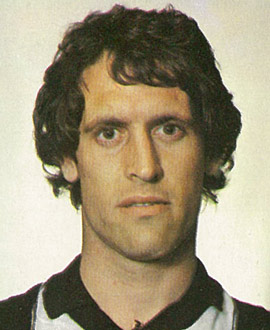 Tom Hafey wasn’t the only former Tiger who made his way to Victoria Park in the lead-up to the 1977 season.

Another, far less heralded, former Richmond figure also joined the Magpies at the same time. And while Gerald Betts never had the same impact on Collingwood as his coach, he was still a valuable contributor across three seasons – especially in that historic near-miss of a season in 1977.

Despite being born in Swan Hill, Betts’ footballing journey really began ata Catholic boarding school on the outskirts of Bendigo in the late 1960s and early 1970s. It was at that time that he started receiving regular correspondence from Alan Schwab and Graeme Richmond – the men driving the Richmond Football Club.

Betts, being zoned to Richmond from his Swan Hill birth, was the country catch the Punt Road duo were chasing. Between February 1967, when he first walked through the gates at St. Vincent’s College at Junortoun, until he walked out in December 1971, Betts was a star in many sports, football being his favourite and the game he was best at.

He was a member of the under-13 premiership side in his first year at school and of the under-18 premiership team in his last. In 1970 he played in the under-17 championship team. In his final year at St. Vincent’s, he finished third in the thirds best and fairest for the Golden City League, totalling 15 votes –from five best-afields.

In each side, Betts was the centre-half-forward, renowned for having particularly ‘sticky’ hands. He was regarded as one of the best marks in junior football in Victoria.

In 1972, he spent a year back in Swan Hill. Still in high school, Betts played at centre half-forward for the Swan Hill first 18 side which won the premiership in the strong Mid-Murray League. And despite a broken collarbone and missing seven games, he polled prominently in the league best-and-fairest medal – which bears the name of his father, John (better known as Jack).

Gerald Betts had a year of schooling to go in 1973, but Richmond didn’t want to wait. So they got him into Melbourne High School for his final year – and thus the door to the VFL was opened.

He played the first two games in the reserves and was then dropped to the under-19s for half a season, where hot-gospelling coach Ray ‘Slug’ Jordan said to Betts: “You’re a lazy forward and I’ll play you at centre-half-back and make you run.”

Soon it was back to the reserves, and Betts held his place to be best on ground in their premiership side of 1973.

A strong overhead mark, Betts became a tight defender. At just under 6’2”, he could match it with the smalls as well as the talls. Strongly built, he dealt comfortably with the physical demands of VFL football from his earliest exposure.

He made his senior debut the next season (in a dominant Richmond side that compiled a record winning score against Fitzroy at VFL Park). He played on a half-back flank that day, and that’s where he stayed as he put together 10 games across his first two seasons. He became pretty much pigeon-holed as a half-back flanker, and with Francis Bourke, Merv Keane and Kevin Morris starring in a very strong Richmond combination, was finding it hard to get into the side.

Aware of the difficulties fitting him in at Richmond, and also aware that the promising youngster could be lost to a weaker VFL club in the search for a regular spot, Hafey recommended a sojourn to WA for Betts to gain experience in a strong competition.

So Betts spent 1976 with East Perth, playing in a losing grand final. He played every game and polled well in the Sandover Medal, but returned to Melbourne at the end of the year. By that time Hafey had been sacked at Richmond and taken on at Collingwood. Contacted by his old mentor, Betts needed little persuading to don the black and white.

He quickly became a regular in the Magpie seniors as Collingwood underwent its surprising transformation from wooden-spooners in ’76 to grand finalists in ’77. He played the first seven games before his season was interrupted by an untimely hamstring injury, and though he came back to play the last seven games, he could only make it to the bench for both grand finals.

The club itself described Betts as “one of the success stories” of 1977. “Playing on the half-back flank his close-checking, defensive work was great,” said the club’s 1978 Yearbook. “He plays close to his opponent and punches the ball when caught behind. Gerald always runs past to receive a handball in an effort to create teamwork.”

Despite the accolades he played only 12 more games with Collingwood over the next two years, never quite managing to cement a place. He was, however, a member of the Pies’ night premiership side in 1979.

He returned to WA after his Collingwood adventure ended and became a key player at full-back with Claremont, including their Premiership in 1981. Former Essendon champ Graham Moss was captain-coach of that team and he was a big fan.

“Gerald was a dashing full-back whose speed and strength were to the fore. He was a great team man and a good fella and deserved to be in our premiership team.”

He retired at age 29 after a serious ankle injury and returned to Melbourne with work. He would later serve as Kevin Sheedy’s runner at Essendon for two years.