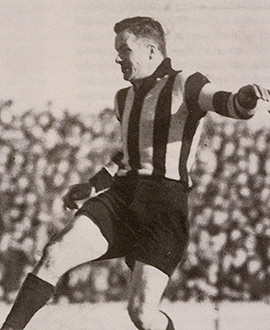 When the immortal Dick Lee finally ended his glorious 17-year career in 1922, Collingwood fans were justifiably spooked. How could they possibly replace the man who was not only the game’s greatest forward but also one of the best footballers of all time? Where would they find someone who could be even half as good as Dick Lee?

Remarkably, Lee’s replacement was right under their noses. And as it turned out, he would go on not only to break almost every one of Lee’s records but also to set new marks that would stand for generations.

But at that time, if you had told any Collingwood supporter that that man would be Gordon Coventry, you would have been laughed out of the room. And with good reason, for Gordon was nobody’s idea of an instant hit in league football. He had been in the system for three years when Lee retired and was still struggling to find his feet two years after that. Only Collingwood’s great faith in him – and almost infinite patience – gave him the chance to go on to become the game’s greatest goalkicker. Indeed, so prolific did Gordon Coventry become that a number of newspapers would end up describing him as “the Don Bradman of football”.

But back when he started, in 1920, those sorts of accolades and achievements would have seemed inconceivable. For Gordon Coventry’s start in league football was hesitant and unconvincing, to put it mildly.

Gordon – or ‘Nuts’ as he was known to his family because of his disproportionately large head as a child – came from Diamond Creek. He was invited to train with the Pies as an 18-year-old late in 1920, the week after Magpie officials had secretly watched him in his local team’s Grand Final. Coventry, the archetypal quiet, unassuming country lad, was gobsmacked.

When he arrived at Victoria Park the next Tuesday afternoon, he was struck by such a fearful bout of nerves that he actually turned around and decided to head back home to the comfort of his parents’ orchard. In the end it was only the fear of how much stick he’d cop from his brothers for ‘piking it’ that led him to change his mind again. “I decided I would sooner face what was in store for me at Collingwood than go home and tell my brothers that I was too nervous to enter the dressing room,” he wrote in theSporting Globe years later.

That first training session was awful. It left Gordon completely demoralised, as he realised how far out of his depth he was. But Collingwood chose him at centre half-forward that weekend against St Kilda anyway – where he managed only a solitary kick (it was, of course, a goal). “I saw hundreds of lads having their first League games thereafter, but none was so inglorious as mine,” he would say later.

At this stage of his career Coventry could mark and kick but not much else. He had good hands and was accurate in front of goal but he was slow, awkward and cumbersome. He was dropped after his debut, and told secretary Ern Copeland that he didn’t think he was good enough, but the Magpies persisted anyway. He returned to the team for the last home-and-away game and kicked three goals, then kicked nine more in three finals – including a five-goal haul against Carlton in the preliminary final, a performance that became famous for the fact that he also lost five teeth in the process, courtesy of Carlton’s hard-hitting defender Paddy O’Brien. He backed up from that physical hammering with three more goals in the Grand Final.

This should have been the start of a straightforward path to legend status – but it wasn’t. He managed only 19 goals from 11 starts in his first full season, and a more promising 42 in his second. But then he went backwards – 36 goals in 1923 and 28 in 1924. Jock McHale kept working with him, and Coventry himself worked hard to improve his agility, his kicking and to reduce the size of his turning circle. The Magpies were convinced that there was somethingthere. But many, many fans were equally convinced that the big, hulking lad with the giant hands would never make it. He was quiet, shy and easy-going, and his play lacked aggression. Critics often interpreted this as a lack of determination or commitment. Some even thought he was lazy.

The 1925 season started in similar vein, and he was dropped after the opening game. This was make-or-break time. And when he returned a couple of weeks later, everything began to click. Marks began to stick, a few good performances boosted his confidence – including 23 goals in one four-week patch in the middle of the season – and ‘Nuts’ was on his way.

Never has a football club’s patience with one player been so richly rewarded. Before long he would be breaking every goalkicking record in the game.

Gordon’s game was based around a strong physique, a vice-like pair of hands, superb judgement and a brilliant understanding of how to use his body to advantage. He was so strongly built – huge shoulders, a big rump, massive hands – that he was almost impossible to move when in front, and he was one of the first to perfect the technique of taking marks with his hands stretched out in front while pushing his ample posterior back into his trailing opponent. It made him almost impossible to spoil.

He was neither quick nor a high flyer but he didn’t need to be. He wasn’t spectacular but he was prolific and remarkably consistent. He was almost unbeatable in one-on-one contests, and as another avenue developed a jinking, stuttering kind of leading pattern that thoroughly confused opposition defenders and gave him the yard of space he needed. With players like the Colliers, Billy Libbis and Jack Beveridge ahead of him, that was all he needed.

He also benefited from a rule change in 1924 that penalised teams that touched the ball last before it crossed the boundary line. Jock McHale saw the extra benefits of playing down the corridor after this rule change, so Collingwood’s game plan became centred around swift movement of the ball down the middle of the ground – long and fast to ‘Nuts’.

The result was a feast of goalscoring records. In 1926 he broke the VFL record for goals in a season – which he then broke again and again. In 1929 he became the first player ever to kick 100 goals in a season, a feat he achieved three more times. He obliterated the league record by kicking 16 goals in a game in 1929, then bettered it with 17 the next year. He kicked 100 goals against every VFL team bar one. He kicked 50 or more goals in a record 13 consecutive seasons. He was the VFL’s leading goalkicker six times; Collingwood’s leading goalkicker 16 times. He kicked a record 111 goals in finals games.

His final career tally of 1299 goals stood as a league record until 1999. He was also the first VFL player to reach the 300-game milestone, and his final total of 306 games stood as the Collingwood record until Tony Shaw broke it in 1994. The comparisons with Don Bradman were justified.

One of the greatest things about Gordon Coventry was that he never changed as a person. He remained humble and ridiculously modest throughout – even refusing to upgrade his boots (he basically used only two or three pairs throughout his entire 18-year career). And he remained a gentle, almost placid presence on the ground – except in 1934 when a Carlton player belted his brother, Syd, and another time in 1936 when he retaliated against a Richmond defender who had persistently hit him on a painful crop of boils that had broken out on the back of his neck. Despite that latter incident being the only report of his career he was suspended for eight weeks — missing the 1936 Grand Final.

Football writers and fans alike were appalled at the unduly harsh nature of the verdict, and there was general outrage on his behalf, as well as an outpouring of support for the genial giant. Coventry, true to form, apologised to Collingwood fans for ‘forgetting my good manners’ – and promptly retired. But fortunately he later changed his mind and decided to suit up again in 1937 for what would be his final VFL season, where he kicked 72 goals to win the League’s goalkicking title for the sixth time.

That was a much more appropriate note on which to end one of the most celebrated careers in VFL/AFL history. Gordon Coventry’s standing in the game is such that one end of the Docklands Stadium is named after him. He also remains the only Magpie inducted into the AFL Hall of Fame as a player (Jock McHale is there as a coach). Not bad going for a shy kid who was afraid of embarrassing himself in league football.