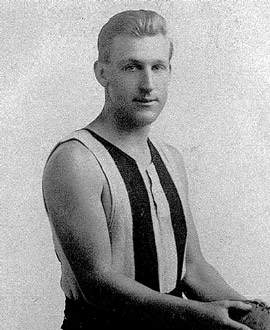 Football, like many sports, can be a great leveller. You can be flying high and successful one week, but the game has a way of bringing you back to earth with a thud the next.

That’s a lesson that Harold ‘Bottles’ Chesswas learned early in his VFL career at Collingwood. Chesswas made his debut in 1922 and, in the last game of the home-and-away season, achieved every kid’s dream by kicking the winning goal in the dying seconds of a crucial match. It was against Essendon to decide top spot and champion forward Dick Lee was missing through injury. Chesswas, played at full-forward in Lee’s absence, kicked four of the side’s six goals on a miserable, mud-soaked afternoon – the last of which put the Magpies in front with just seconds remaining. Chesswas was King of Collingwood.

Just two weeks later, however, it was a different story. It was the semi-final against Fitzroy and Lee was missing again, but this time Chesswas had a horror day. It started when he unintentionally got in the way of a low, goal-bound kick from Ernie Wilson and deprived the side of six valuable points – and it progressively got worse. He recalled later that he kicked eight or nine points that day – the last of which, if converted, would have won the game for his side. This time, however, there was to be no fairytale finish; Chesswas missed, the Pies lost and Chesswas blamed himself entirely for the team’s defeat.

But any guilt Harold Chesswas felt over that loss was surely assuaged by the career that followed, during which he gave outstanding service to the black and white cause and played in four successive Premierships. He was a great and loyal servant who played in just about every position on the ground at one time or another and rarely let his teammates down, no matter what the task.

Harold Clark Chesswas was born in Clifton Hill, one of seven kids. The Chesswas family was very poor and the parents died at a young age, so young Harold collected bottles as a kid to help supplement what little income they had. That obsession with bottle collecting led to the nickname by which he was known for most of his life, apparently bestowed on him by the headmaster of the Victoria Park State School.

Chesswas was an outstanding schoolboy footballer and cricketer (his cousin George, coincidentally, was a prolific run-getter with Northcote) and as a 17-year-old was even invited by Jack Ryder to train with the Collingwood Cricket Club. But despite showing perhaps even greater promise at cricket than football, he spurned the offer and decided to focus on football instead. He told a newspaper in the early 1920s that he was sorry he had not pursued his cricket further, but that he did not love playing such sport in hot weather, preferring instead to go swimming.

Another crucial factor in his decision was his boyhood love of watching the Pies play. As a youngster he used to watch the games at Victoria Park with his mate, Roy Allen (who played two games for the club in 1924). Roy recalled: “We used to sit near Jim Manning, the timekeeper. Many’s the time we used to tell him to ring the bell when things got a bit tight in the last quarter.” Allen and Chesswas also used to try to carry the bag of Collingwood great Dick Lee into the ground to save the threepence admittance fee.

Allen and Chesswas were both playing football locally, and within a few years of simply being fans in the outer were invited to try out with the Collingwood reserves, a team called Collingwood Districts). Both played in the 1919 and ’20 seconds Premiership teams (in the first of which Harry played alongside his brother, Wal) and Chesswas graduated to the seniors in 1922. In the 10 years that followed he played 155 games, spent time as vice-captain and established a reputation for hard work, consistency and smart play.

Late in his career, The Sporting Globe praised his overall contribution to Collingwood: “He has given consistently good service in a variety of positions. Chesswas is dashing and his anticipation and cleverness are responsible for repeatedly thrusting the ball well forward.” Another observer wrote that he “is built on hard and wiry lines and marks with judgement”. Another noted: “He makes position well, is an accurate stab kick and generally plays a good, heady game.”

After his early forays as a forward, most of his games were played on the wing or at half-forward, with occasional stints in the centre. He wasn’t especially fast or brilliant, but he was ultra-reliable and knew how to fit in perfectly with the style of game Jock McHale developed. “He is essentially a footballer who excels when the game is fast and open, being clever with his kicking and manoeuvring for position”, wrote The Sporting Globe. “He is a fine player to watch, for he has pace and uses fine judgement. Chesswas schemes for position very well, and gives the man minding him no end of trouble.”

Chesswas remained a valuable member of the team until the end of his career, still managing 16 games in his final season before deciding it was time to allow the post-Machine rebuilding to commence.

He ran an upholstery shop in Smith Street for a time, but died of cancer of the liver at the age of just 55. It was a sad end for a man who contributed much to the Collingwood Football Club throughout its finest years.