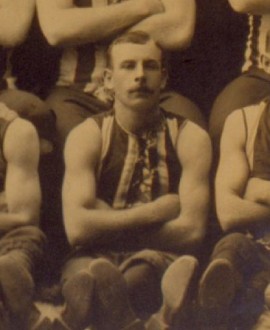 In the mid-1890s, Collingwood possessed one of the game’s first ever ‘mosquito fleets’. Names like the always controversial Jack McInerny, Bill Balfour and the hero of the 1896 Grand Final, Danny Flaherty, caused huge problems for many opposition teams.

But the best was also the smallest – and lightest – of them all. What Harry Dowdall lacked in pounds and inches, however, he more than made up for with grit, speed and skill. He was Collingwood’s first great little man.

Harry Dowdall was born in Emerald Hill in 1872. His birth certificate said Henry Arthur, but in all other major landmarks of his life he’s referred to as Harry. His older brother Jim was also a handy footballer who would play for South Melbourne, Richmond and Collingwood, and he helped blaze the trail for his younger sibling.

Harry’s mother, Isabella, died of Bright’s Disease when he was just 16. By that time he was already making his name as a footballer, and was on his way to join Jim at South Melbourne. Both left the Lake Oval midway through 1892, Harry to the newly formed Collingwood and Jim to Richmond.

Harry made his debut with the Magpies at the end of July against Geelong in what proved to be a 10-goal defeat. So good were his early performances that by the end of the year he had pretty much made the roving position his own.

Collingwood would later claim that he was the smallest and lightest (around eight stone) man playing in the VFA at the time. But he was also one of the most brilliant – fast, game and particularly good in the wet. He was tenacious, and loved getting ‘in and under’ at contests – one newspaper described him as a ‘ferret’ at getting the ball out. He was a good kick and a very good ball-handler. He also loved nothing more than being on the ball, and in the thick of the action, all game.

Dowdall teamed particularly well with McInerney, first in 1892 and then again in 1894-95. The Argus once described them as ‘those two nimble midgets’, and in one remarkable passage of play in 1894 they worked the ball the length of the field via a succession of passes and handballs to each other.

“He is a veritable little wonder,” wrote the Australasian in 1893. “He is, I suspect, the lightest man in the game … and good as are some of the little ones he is the best of them. In the Intercolonial team the crowd would go wild over him.”

These were the days of the so-called ‘little marks’ – a rule whereby players were able to claim the privileges of what are today considered marks even if the ball travelled short distances. As such, Collingwood’s ‘ruck’ contained not big men – jumping off the ground to tap the ball was either outlawed or frowned upon – but four nimble, smaller men, most famously the aforementioned Dowdall, McInerny, Flaherty and Balfour. After Bill Strickland joined from Carlton in 1893 and took over as club captain, this quartet came to be known as ‘Strickland’s Midgets’.

Dowdall’s first full season, in 1893, was superb. Collingwood would later retrospectively deem him to have won the club’s Best Player award. It was a big year in other ways, too: he got married and also fathered the first of his four children.

But 1894 proved more of a struggle, as persistent ankle problems blighted his campaign. Still, he did well enough to be chosen in a VFA representative team that played a charity match at the end of the season to raise money for the Hospital Sunday Committee.

Harry returned to his best in 1895 and was a key part of the 1896 Premiership team. “Little Dowdall was as clever as a kitten, always in the thick of it, ever doing something smart and daring,” wrote the Argus after one of his games. “He threw his whole soul and every ounce of his 8st weight into the conflict.”

He left Collingwood at the end of 1896 and headed to WA looking for work. But he was back in time to resume his career at Victoria Park for the club’s first game in the newly formed VFL the following season. He played 16 games that year – finally getting the chance to play at Collingwood with his brother, who had joined him there from a stint in Tasmania – but the season ended on a sour note when he refused to play the final match of the year unless he was allowed to play on the ball for the whole game. He also became involved in a big barney with Geelong’s Jim McShane that day.

Collingwood didn’t tend to take kindly to those sorts of histrionics in those days and, coincidentally or not, Harry’s output began to diminish from the next season. He managed 13 games in 1898, seven in 1899 and just two in 1900, as form and injuries took their toll. He played a solitary game with St Kilda in 1901 before heading back to Collingwood Juniors.

His work as a stonemason continued, but Harry’s health began to deteriorate in the years after he stopped playing football. In 1912, aged just 40, he died of kidney and liver failure after a short illness, likely due to excessive alcohol. He died on a Thursday morning, and the club flag was lowered to half-mast that afternoon.

It was a sad end to the life of a man who had given such pleasure to his many Collingwood fans over a nine-year career. Tiny in stature but big in heart and a terrier on the field, Harry Dowdall was the first in a long line of famous Magpie small men.