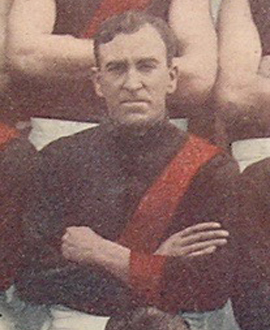 The First World War ended or interrupted the careers of many ‘coodabeen’ sporting greats. And it cost Collingwood a potential beauty in Harry Kerley.

Kerley arrived on the VFL scene with a bang in 1915, kicking 21 goals in 12 games, taking spectacular marks to rival Dick Lee and generally giving promise of a long and glorious career as a strong-marking forward. Instead, he spent most of the next four years at the Front, and though he returned to football when he came home, his best had passed – as had his time at Collingwood.

Henry Charles Kerley’s footy career started with the Prahran Juniors team and he crossed from there to the Collingwood District Football Club midway through 1914, where he played alongside future Magpie skipper Con McCarthy. He starred in the 1914 Metropolitan Association finals and remained with the District team into 1915, but eventually his consistently sound performances were too much for the selectors to ignore, and he was given a senior berth against Carlton in Round 7.

Almost immediately, Harry Kerley looked like he was a perfect fit for top level football. He was a big man who played mostly up forward but also as a follower. He was a brilliant aerialist who could soar with the best of them but also take strong contested grabs, and a thumping kick.

He kicked a goal on debut, playing alongside Dick Lee (who kicked a lazy nine). But it was his second game that really set typewriters tapping, when he kicked four against Fitzroy. ‘Raggles’, writing in Punch, described Kerley as “cool as an Arctic shower …unerring in his accuracy”. The Football Record wrote: “Kerley played a wonderfully good game on Collingwood’s forward lines, and is the makings of a topnotcher. This rising forward got four goals, and, besides, marked nicely, and played like a veteran.” The Sporting Judge said he was “a fine mark and a beautiful kick”, while the Winner described him as “neat, sure and effective …played with the coolness of a veteran.”

Everything was going right for Harry Kerley at this stage. The next week against South Melbourne he tried to pass the ball to Lee but mishit it and it dribbled through for a goal anyway. He kicked another bag of four several weeks later against St Kilda, then late in the season took a sensational high mark that was so meteoric in style that most initially thought it had been taken by the legendary high-flyer Lee. “Kerley was the man who had taken the flight through space,” wrote the Football Record, “and he will never take a better one. It stood out as fine an effort as any seen this season.”

His marking, goalkicking and general all-round play prompted one journalist to write: “Few first-season men show the ability of Kerley, and in him Collingwood appear to have found a gem. A fine mark and kick he is smart to take advantage of an opening, and ever ready to pass to his comrades.”

All this, and he was still only 20. His form tapered off towards the end of the season – understandably – and he had a poor semi-final, leading to his omission for the grand final. Still, nobody doubted that Collingwood had a worthy successor to Dick Lee on its hands.

But early in 1916, Harry Kerley enlisted in the 1st Reinforcements of the 60th Battalion. He sailed to Suez first, then spent time in France and England, during which he played in the historic services game in London. In a letter sent to the club during his time in England, he seemed to be almost enjoying himself:
“I have had a good trip round, having seen a bit of Egypt, France and England. We are camped now at Salisbury Plains, and, except for bad weather, you couldn’t wish for anything better. In fact, on a Saturday afternoon here you seem to forget you are a soldier. The place is just like a large town, and football and cricket matches are an every week affair. I have had one game so far, but football is pretty hard work here on no training, and I think I will I just be a soldier while I am away, and I hope that I will be back with you for next year’s matches.”

In the end, however, Harry Kerley didn’t make it back to Australia until late in 1919. And that’s when Collingwood really began to realize what it had missed out on.

Kerley initially returned to play with Prahran. St Kilda recruited him from there and he spent two seasons with the Saints, playing 20 games, kicking 29 goals and showing he could still cut it at VFL level. He was named in the best for St Kilda in his first game back and was also chosen in a VFL representative team that played Ballarat in 1921. He then went to Port Melbourne, where “his generalship was a real eye-opener”, and captain-coached Rutherglen in 1924. He was recruited to be part of Coburg’s first team in the VFA in 1925 (he tied for leading goalkicker that year), then became captain for the club’s three successive flags in 1926, ’27 and ’28 (he was centre half-forward in each). He later captain-coached Coburg.

So in the end, it wasn’t just the soaring marks and bags of goals that Collingwood had been denied when Harry Kerley left: it was also the leadership he would have provided. (He also would have been great value at Past Players functions, because he survived until the grand old age of 96!)

Harry Kerley had one stellar season at Victoria Park. Had it not been for the First World War, it would surely have been so much more.