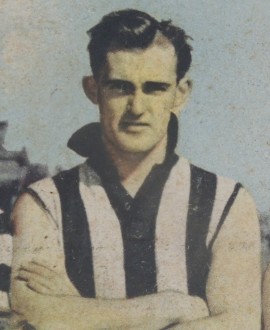 Praise for a Magpie player from a rival didn’t come more hard-won than when it was delivered by former Richmond legend Jack Dyer. ‘Captain Blood’ was hard to please at the best of times, but especially when the player was wearing a Collingwood jumper.

So Harvey Stevens must have known he’d played really well when Dyer went out of his way to lavish praise on the youngster after he’d kicked five goals against Richmond in what was just his 14th game of senior football.

“He’s one of the best ruckmen recruits I’ve seen come into the game,” said Dyer after the match. “Young Stevens is a good one. He reminds me a lot of Phonse Kyne on the field. He’s got a lot of good football in him.”

Dyer was right. Sadly though, the best of Harvey Steven’s football would be played away from Collingwood.

Stevens had always seemed destined to play at Footscray. His father Arthur, better known as ‘Chidda’, had played 64 games with the Dogs in the late 1920s and early ’30s, even captaining the club in 1929. But the family lived in a part of Preston that meant young Harvey was residentially bound to the Magpies. So after making a name for himself with Reservoir, Victoria Park was where Harvey headed in 1948.

He spent most of that year with the reserves but received his first taste of senior footy late in the season when he played four of the last five games as a follower-forward. He was big and strong, could take a mark, and was reasonably reliable around goals. He did well enough in those games to establish himself as a regular in 1949, and he grabbed the opportunity with both hands.

A few weeks before his breakthrough game against Richmond, he’d kicked bags if three in successive weeks against Fitzroy and Hawthorn. And a few weeks after his five-goal haul against the Tigers, he was chosen to play for a Victorian B side against New South Wales. This meteoric rise saw Harvey Stevens tagged as one of the most promising big men in the VFL – and not only by Jack Dyer.

“A young fellow that takes my eye is Magpie Harvey Stevens,” wrote respected footy writer Hec de Lacy in the Sporting Globe. Is he even 18 yet? Here is a follower who has pulled on the League’s best and hasn’t been beaten.”

The standout feature of Stevens’ game was his strength. He was a willing workhorse whether n the ruck or forward and he would always run himself into the ground in pursuit of his team’s goals. He was a wonderful high mark and very good in the packs, and a useful kick – always dangerous around goals.

But his career at Collingwood stagnated after that stellar 1949 season. He managed only a dozen games in each of the next two seasons, and only eight in 1952, due to a combination of injuries and concern over his agility. Frustrated at the lack of opportunities, he tried to cross to Footscray midway through 1952 but was refused. Nevertheless, Magpie selectors became increasingly concerned that he was too slow and cumbersome, weaknesses that were exacerbated when he put on some extra pounds while recovering from a rib injury.

Still, when injuries hit the team late in the year, those same selectors chose him in the unfamiliar role of full-forward for the 1952 Grand Final. He struggled that day, like many of his teammates, but set himself for a big 1953. He did some extra gym and running sessions and turned up for pre-season a few kilos lighter. He starred in the practice matches and was told by club officials that they were happy with his form.

So Stevens, like many, was blindsided when the Magpies dropped him from the senior list just before the 1953 season started. “I wouldn’t have minded so much had I been warned that I wasn’t up to the mark,” Stevens said. “But I was led to believe quite the reverse.”

The move attracted plenty of headlines, with more than one newspaper describing it as “a bombshell”. Plenty of observers felt he’d been unfairly made a scapegoat for the Grand Final loss to Geelong. Stevens himself was hurt and stung. But the Bulldogs moved quickly to secure their belated father-son, and what a bargain he proved to be. He won the best and fairest at the Western Oval that year, and finished equal third in the Brownlow Medal in 1954. He played in the Dogs’ ’54 flag, and also emulated his old man by captaining the club in 1957. Within a year of leaving Collingwood, the Sporting Globe had branded him one of the “outstanding giveaways in modern football”.

Harvey Stevens ended up totalling 126 games (54 of them with Collingwood) and a more-than-respectable 127 goals. Of course it would have been ideal if he’d been able to play his whole career at Collingwood, but that ruthless decision by the Magpie selectors actually turned out to be a classic win-win: the Pies walked away with a Premiership the year they made their controversial call, while Stevens finally got to play for the club he’d always been emotionally tied to – and be part of a flag with them. For all the pain his axing caused at the time, it really couldn’t have worked out better.