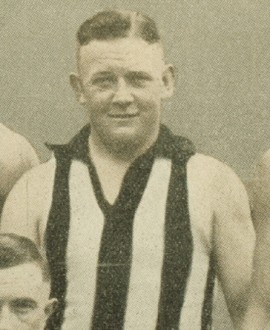 Sometimes one game can define a player’s career, regardless of whatever else they might achieve. Such was the case with Horrie ‘Tubby’ Edmonds, the kid from Diamond Creek who dominated a Grand Final in only his ninth VFL game.

Edmonds’s bulky build belied a short burst of speed and he was capable of dodging and ducking opponents. He may not have possessed the perfect cut for a VFL player, but to underestimate him because of his frame was to do so at your peril, as many opponents found out.

The Argus believed he displayed “the judgment and skill of a born footballer”. His captain, Syd Coventry, agreed, saying, “Most people think he is too slow, but if you are alongside him and see him work up pace you will thoroughly appreciate the fact that he can shift along. In addition, he is stouthearted and his shoulders will bump manfully and squarely in shepherding other forwards.”

A friend of the Coventrys, who lived nearby, Edmonds first played footy at the Diamond Creek State School, where he was skipper for three seasons. After leaving school he went to Melbourne to board, playing a season with the Middle Park C.Y.M.S team. He then returned to Diamond Creek, playing full-forward for five years with the local team.

Despite this extensive grounding he was still only 20 (and by this time, a postman) when he decided to try his hand at VFL football in 1929. Two VFA clubs were interested, as was Fitzroy, but he chose Collingwood as much for the connection with the Coventrys as anything else. His practice match form was impressive, but even then there were some who thought his build would mitigate against the need for speed and agility. How wrong they were.
After encouraging performances with the seconds, Edmonds was named first emergency for several senior games. But eventually he broke through for his senior debut in Round 12, 1929, when he kicked three goals on debut against Richmond. He was pitted against a seasoned performer in Basil McCormack that day but The Sporting Globe said Edmonds “immediately settled down, betraying no signs of nervousness, and played as if he had been a member of the team for seasons.” On the half-forward flank he showed fine marking ability, and his clever turning was greatly admired. Though he looks slow and lumbering, he is a deceptive type of player … he held the ball in the air and was smarter than might have been expected on the ground”.

You’d think the Tigers might have learned from that performance. But just a few months later they were stung again, underestimating him at their peril in the Grand Final. With the great Gordon Coventry almost playing as a decoy, the 20-year-old slipped under the guard of the Tiger defenders to kick five goals in a dazzling display. Edmonds used all his wiles to great effect that spring day.

As Harry Collier said later: “Tubby Edmonds didn’t look a footballer because he wasn’t built the right way. He was tubby and short. But he had a great football brain.” The Globe said: “Edmonds plays a strong game. His weight 13st. enables him to come through strongly, an important asset in attack. His kicking with either foot is good, and he has a good goal sense. In every respect he is an asset to Collingwood.”

His Grand Final performances capped off a memorable debut season where he kicked 19 goals from his first nine games. And goalscoring would remain his chief forte, as Edmonds was one of those forwards with exquisite goal sense, continually popping up in the right place at the right time. In 1933, playing in the midweek competition for the St Kilda Telegraph side, he kicked 13 out of his side’s 16 goals! And a VFL career average of more than 1.5 goals per game is impressive.

Edmonds played in two more flags after his personal heroics in 1929, with Collingwood in 1930 and Richmond in 1934. He transferred to Punt Road midway through the 1934 season, on the last day that clearances closed, after a disagreement with secretary Frank Wraith, who had claimed some of the players had not tried hard enough in a game. ‘Tubby’ took issue with the suggestion and left the club after 79 games, walking straight into a team that was on its way to a flag.

He later played at Brighton, then enjoyed  a long coaching career that included Collingwood seconds (to a flag in 1940), Footscray seconds (where he also played one senior game in 1937) and Hawthorn seconds (where he coached the club’s first ever premiership in 1958 and was narrowly beaten to the senior job by John Kennedy in 1960). His success as a coach underlined yet again his understanding of the game.

While coaching Hawthorn reserves, he pulled on the boots again one day at the age of 47 when a flu epidemic left his side desperately short of players. He kicked two goals that day, displaying for one final time the uncanny goal sense and footy ‘smarts’ that had stunned Richmond and helped guide Collingwood to a flag back in 1929.