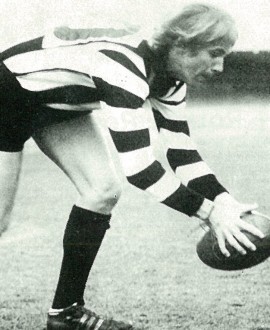 The Collingwood Football Club was still a pretty conservative place in 1972.

So it was quite a shock to the system when Ian McOrist turned up to Victoria Park during the 1972 pre-season with long hair, no shoes, torn jeans and wearing a peace medallion around his neck.

“He is unorthodox on and off the field – something that has raised a few eyebrows around the Collingwood club,” wrote teammate Peter McKenna in Inside Football a couple of months later.

But McKenna wasn’t writing about this newcomer because of his curiosity value. At that time everyone in the game was talking about Ian McOrist – because he’d just played an absolute blinder in his first full game of VFL football.

McOrist had joined Collingwood from Northcote in the VFA, where he’d finished third in the Division 2 competition best and fairest award in 1971. He played mostly in the centre for Northcote, and won a reputation for roaming far and wide.

He played much the same way when he moved to Victoria Park, albeit on the half-forward line. He was your classic half-forward flanker: free-roaming, fast, good at finding space and a magnificent long left-foot kick.

After a few handy games with the reserves to start the season, McOrist was named on the bench for the Round 6 game against Hawthorn. But his selection attracted few headlines, because the newspapers were more focused on the fact that he was sharing the bench with former skipper Terry Waters, who had been demoted that week.

Waters retired in the week after that game, and his departure, combined with several other injuries, opened the way for the unconventional youngster wearing #46 to get his first full game against Fitzroy at the Junction Oval the following week.

Four quarters and six goals later, the Magpie fans thought they’d found themselves a new star. One commentator contrasted his arrival with Waters’ departure, saying: “Collingwood has lost one champion but gained another.”

You could understand such hyperbole. Even though four of his six goals came from free kicks, McOrist was brilliant that day. He wandered far and wide and nobody could keep up with him. One of his opponents, David Rhodes, wrote glowingly of the newcomer’s display in the Age afterwards. “What a great first-up performance by Ian McOrist,” he said. “The way he moved around the half-forward flank he could have got goals from anywhere. It doesn’t surprise me to find that he kicked six goals as I could see his blond head bobbing up all over the forward line.”

Peter McKenna was equally effusive. “He is the most unlikely looking League footballer you would find anywhere. But I will be very surprised if he does not make the grade. In fact I would go so far as to say that he could become one of League football’s personality players before too long.

“His biggest asset is that he will not be overawed by playing League football: it appears to me that he treats playing in the top competition in the country as he would playing paddock footy with a few mates.”

McOrist had 23 touches that day, kicked 6.2 and was named second best on ground in the Age, behind Fitzroy full-back Harvey Merrigan (who kept McKenna to one goal). He also gained a Brownlow vote. The Magpies responded by giving him the #23 jumper for his next game.

But the early predictions that the Pies had ‘gained a champion’ proved a little wide of the mark. McOrist didn’t find the going as easy during the rest of the year, though he still found plenty of the footy. He averaged more than 18 disposals for eight of his first nine games, though he ran out of steam late in the year. He managed only four goals in four games mid-season and was dropped after Round 16, only making it back for what proved to be the last game of the year, the semi-final loss to St Kilda.

Remarkably, that turned out to be his last game of VFL football. After 12 games and 16 goals, his time at the top was over. He injured his back during the 1973 pre-season and, though he played 20 games and kicked 23 goals in the reserves that year, the club didn’t persevere beyond that. Instead he headed bush to Bacchus Marsh, then back to his original club, Northcote.

But the conventional path was never for Ian McOrist, who legend has it was also part of a one-hit wonder band called Golden Boy. He dabbled in art for a while, worked as a landscape gardener, travelled extensively and more recently has been teaching English in Suzhou, China.

Years after McOrist’s brief brush with footballing fame, Russell Holmesby from Inside Football tracked him down again, but found him suffering badly from the back problem that had first emerged in 1973.

Ian McOrist might not have enjoyed a long career, but his breathtaking six-goal cameo in 1972 gave us all a glimpse of what might have been. He was never going to be a ‘typical’ footballer, and his career followed that kind of path. But those who saw his game that day at the Junction Oval will never forget it.