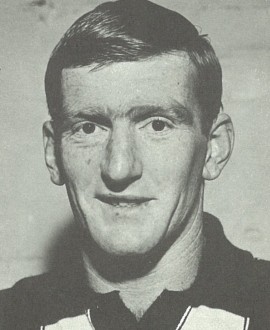 Ian Montgomery was one of those hard-edged, no-nonsense defenders that coaches and teammates love, but who rarely draw plaudits from fans or media. And that’s just the way this country boy would have liked it.

Ian played his first footy with Greta (near Wangaratta, in the heart of Ned Kelly country) in the Ovens and King League. He spent three years there, during which he represented the O&K representative side as a 17-year-old. He went from there to the Wangaratta Magpies, then coached by former Collingwood player Neville Waller. Their main rivals were the Wangaratta Rovers – at that time coached by the great Bob Rose.

Those two Victoria Park connections proved decisive. Ian came down to be trialled in one Collingwood reserves game in 1963, and when Rose was appointed the Magpies’ senior coach for 1964, Montgomery also made the trek to live in Melbourne full-time.

After his first practice match in the centre (the position he’d played in Wangaratta), Collingwood noted that Ian had the ability to play League football. He spent that year purely with the reserves, playing 18 games and kicking 16 goals as a burly, bustling forward/midfielder. But unbeknown to him, the Collingwood selectors had different plans in mind for him.

He spent the first five games of 1965 still in the reserves – but this time in the back pocket. And Ian took to the new role like a duck to water. So quickly did he adapt that he was elevated to the seniors in Round 6, at the expense of long-serving back pocket player and 1958 Premiership hero Ron Reeves.

It was quite the vote of confidence in the kid from Wangaratta, who had just turned 21. And he repaid the faith by immediately settling in as the team’s first choice small back pocket player, working well with Ted Potter or Peter Boyne at full-back and quickly becoming an automatic selection each week.

But he was ‘small’ only insofar as he was designated to watch the opposition’s resting rover. He was unusually tall for that role, and strongly built too – no doubt partly down to him having been a shearer before coming to Melbourne – so he countered the cleverness of his opponents with strong and robust play. As one newspaper drily observed in 1966, Monty was a (near) six-footer who was actually built as a Magpie ruckman might have been 15 years earlier. He was even a part of the Collingwood Tug-O-War team that won a competition on World of Sport!

He was strong and fearless, had enough pace to go with the smaller men and loved playing close and dishing out hefty bumps. Any resting rover who kicked goals on him knew he had earned them the hard way.

He was disciplined and focused and a classic ‘safety-first’ defender, although he could also take a decent mark, and was renowned for his long clearing kicks. As The Sun newspaper described him: “Youngster who plays close and hard. Notice how he keeps shoulder to shoulder with his opponent even when the ball is at the other end of the field. Form has been very consistent since he forced his way into the side early this season. Stands close but is not always friendly to the forward he is guarding. Alert to chip in and help his fellow defenders if they are in trouble. A good footballer who would probably pay his way in several positions. Especially well-suited to a back pocket because he is strong in a defender’s most important attribute – concentration.”

After a dozen or so senior games The Herald’s Alf Brown said the back pocket position looked to be Montgomery’s for years to come. That seemed almost certain, as he was remarkably consistent. He played 23 games straight from debut until he broke his thumb at training midway through 1966. After a few weeks on the sidelines he came straight back into the seniors, and was part of the heartbreaking Grand Final loss later that year, winning a golf bag for his efforts in that game.

But that consistency began to elude him in the years that followed. He spent some time back in the reserves in 1967, and more again in 1968 as his senior opportunities dwindled after hurting his knee. Further knee damage that year precipitated a retirement that had seemed unfathomable just two years earlier, leaving him on 48 career games. He then decided to make his home in Queensland and transferred to the Kedron club, after which he spent many years coaching, including time as an assistant with Dandenong in the VFA.

In the end, Ian Montgomery’s VFL career spanned less than four seasons. But for two of those years he was among the most consistent defenders in the competition, and an important part of some wonderful Collingwood teams.