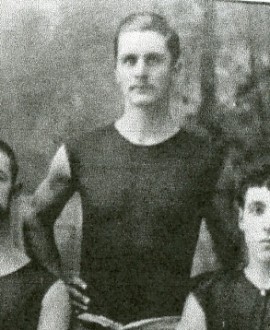 Date of Death
17 September 1931
Recruited From
Clifton
Collingwood Debut
Round 18, 1892

It wasn’t unusual in the 1890s for a footballer to be good at other sports. But there weren’t too many top level footballers who could claim rowing as their other main claim to fame. And for James Lockington, his rise to prominence in both came at roughly the same time, meaning one was almost bound to suffer.

A coachbuilder by profession, James Bryan Lockington was a big, strong lad. He was born in 1873 and was part of a large family (one brother, six sisters, though two died young) who lived in Carlton. He played footy locally, with the Clifton club. He was given a try-out while still a teenager late in Collingwood’s first season, of 1892.

Even though his debut passed largely without notice, you could understand the Magpies wanting to give him a go. He was strongly built – as might be expected from a rower – and seems to have spent most of his time as a follower/ruckman. The Sporting Judge once described him as “a good useful man of the heavy order … who used his weight and strength with admirable judgement in the ruck.” The Argus was a little more direct, labelling him “a big lump of a player.” The Australasian commented on his “impressive muscular development”, and said he was “a splendid mark and has the makings of a good man”. “When Lockington learns to use his weight to advantage he will be a useful man for his side,” added The Herald.

After that one trial game late in 1892, Lockington travelled to Sydney, but returned to Melbourne in time for the next football season. He played in the first practice match of 1893, against Rainbow, but the next week was named for the newly formed Collingwood Juniors (23) in a practice match against Collingwood. And that was where he stayed for all of 1893.

Frustrated at the lack of opportunities, James crossed to Fitzroy in 1894, where he played 14 games. And then his rowing intervened.

He had been rowing since at least 1890 but really started taking it seriously in 1895, with the Yarra Yarra club. In 1896 he was chosen to represent Victoria in the inter-colonial eight but had to withdraw, because he had decided to move to Western Australia. Once in the west he was picked by the WA Rowing Club to represent the state in October 1896 in the Association Challenge Cup, and was also part of the first-ever WA team that took part in the intercolonial championships in 1897 (his eight finished second). He was by now regarded, and described publicly, as “one of the leading amateur oarsmen in the country”. He returned to Victoria late in 1898 and resumed rowing with Yarra Yarra. He would go on to become a vice-captain of the club, and would later have a boat named after him.

Lockington had played some football while in the west, playing at least a couple of games with West Perth in 1896. But there is no evidence he continued playing football at any serious level after 1896, and certainly not after he returned to Victoria.

James Lockington was fortunate enough to be highly proficient at at least two sports. Unfortunately for football, it seems that rowing was his first love, and attracted most of his attention. He certainly had a great build for football, but in the end wasn’t driven to keep his career going.