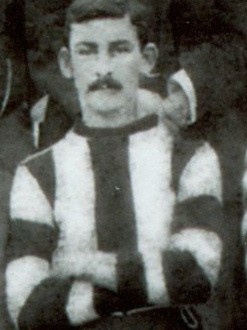 Joe Roe’s senior career at Collingwood was brief, but his wider connection – largely through his involvement with the Collingwood Juniors Football Club – was much more significant.

That connection started when he was named in a squad for the Juniors’ first-ever game in 1893. It’s not known if he played that day, but his name wasn’t mentioned for the rest of the year. A player J Rowe (sic), however, would win a medal for ‘best wing play’ with Collingwood Imperials later that year, so there is every chance that is him.

By 1894 Joe was a fully fledged and regular part of the Juniors line-up, and did so well that he was chosen in a Combined Juniors team that played Essendon before the 1895 VFA season. And he did well enough in that game for Collingwood’s senior side to include him amongst their number for the first two games of the season.

He played in the back pocket for both games, a win over Port Melbourne and a loss to Melbourne. Little is known of his playing style or attributes, but photos show him to have been a wirily built player. His performances in those two senior games passed largely without notice, and he returned to the Juniors for the rest of the season.

He was named with the Juniors in the first game of 1896 but data for other games is thin for the rest of that season. He doesn’t seem to have played for the Juniors at all for the next three seasons, and there is some evidence that he might have played with Richmond City. He next appears on the radar in tragic circumstances, when reports emerged that his young son, Frederick, had died on New Years Eve of 1898 while on a family holiday at Camperdown.

Joe returned to play for the Juniors in 1900, but late in 1902 he was involved in a nasty workplace accident (he was a carpenter/tradesman then working at Andrew Kerr and Co’s timber tards in Franklin street). He was moving a large log of timber and slipped off a trolly, leaving him jammed between the wall and the trolley. The accident caused him severe damage to his left thigh, and he missed all of 1903 before returning for one game in 1904, after which it’s unknown if he ever played football again. (More than 30 years later he would be involved in another workplace accident, this one leaving him with a broken leg)

In the end, Joe Roe’s involvement with Collingwood Juniors spanned 10 years and saw him involved with the club in at least 57 games – an unusually long career with a junior club in those days. But it’s almost certain that the two senior games he managed with Collingwood early in 1895 meant more to him than anything.