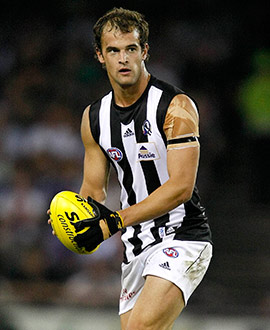 A player who will be forever famous for his match-winning goal against Adelaide in the 2009 Semi-Final, Anthony shot across the Collingwood sky like a shooting star.

He burned brightly for 18 months at full forward, but his stay in Black and White was over almost as quickly as it began.

Recruited via Diamond Creek and the Northern Under-18s, a serious neck injury put him out for the 2007 season and delayed his debut when he was being groomed for defence.

It occurred during the 2007 pre-season when he tackled Marty Clarke at Gosch’s Paddock, hitting Clarke’s shoulder in an odd position. He developed a blood clot in the spinal cord and was ordered to take the year off.

He played an early match against Richmond in 2008, but didn’t get another run until the second half of the year when he became a regular in attack.

Incredibly, for a man who had spent his career in defence, Anthony kicked 25 goals in his first 12 games and kicked at least one goal in his first 25.

He slotted three in the Elimination Final win over Adelaide and four while sporting a newly shaven head against North Melbourne in round 16.

In 2009 he booted 50 goals to top Collingwood’s goalkicking despite tailing off in the closing weeks.

Anthony kicked four goals on five occasions, and remained accurate throughout, kicking 50.28 for the year. His finals series was modest, but his match winning goal against Adelaide will live on in Collingwood history.

Although he began 2010 in the seniors, he quietly slipped down the pecking order and managed just seven games, the last three as a defender.

Anthony had been squeezed out of the mix by the rise of contemporaries Chris Dawes in attack and Ben Reid in defence, while Leigh Brown’s career revival meant the key position posts were set in stone.

He bobbed up one final time in round 21 but lost his place on the eve of the finals and opted to move on when it became clear Collingwood had earmarked Chris Tarrant as its first choice to replace the retiring Simon Prestigiacomo.

After crossing to Fremantle, he was unable to command a regular spot, playing mostly as a defender, and left the club at the end of 2012.

He returned to VFL level in 2014 when he turned out for the Northern Blues.