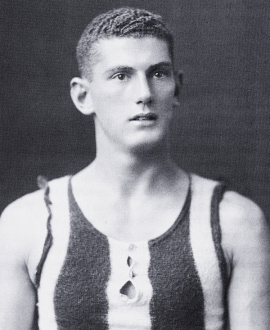 Jack Beveridge was one of the keys to Collingwood’s success in the 1920s and 1930s. He was a magnificent player, one of the classiest and most polished footballers who has ever taken the field in a black and white jumper.

And it had been that way from the moment he first appeared in the senior team. Rarely has a player’s senior debut been greeted with such unstinting praise as was Beveridge’s.

Jack was a local boy, born and bred in Abbotsford and educated at the Christian Brothers’ College in the same suburb. He played football there, then spent a year with the Catholic Young Men’s Society team. He went to Collingwood in 1925 and spent the year in the seconds, but was in the senior line-up for the first game of 1926 against Fitzroy.

That game was played only days before his 19th birthday, and if young Jack was hoping for an early birthday present he need have looked no further than the reports of his debut contained in the sports pages of Melbourne’s major newspapers. The Sporting Globe said Beveridge was one of the most promising recruits Collingwood had picked up for many a day.

“Those who saw him in action last Saturday found it difficult to believe that it was his first appearance in League football” reported the Globe. “He played with the skill, judgement and coolness of a seasoned footballer. In most departments of the game he showed that he was no novice. His pace and quickness on the turn were strong features of his game, but his passing and marking were just as noteworthy.”

Another critic wrote: “If ever there was a born footballer he is one, and veteran critics were enthusiastically proclaiming after the match that they had never seen a player make such an auspicious beginning. Stationed at half forward on the wing he was conspicuous all day, doing things in the natural easy way of the finished footballer. He is a tiger for work, marks and turns well and disposes of the ball to advantage.”

Of course, first impressions sometimes can be deceptive. Not in this case. Throughout the rest of his 148-game career Beveridge was to consistently show the same qualities he had displayed so prominently in his debut.

When old players and supporters talked of Jack Beveridge, they used words like balance, poise and skill. Jack was a “class” footballer, a footballing perfectionist. Everything he did on the field bore the stamp of effortless ease of one who had mastered the art. One long-time supporter said he always remembered Beveridge’s smooth, easy bouncing of the ball on the run, and how he could change direction mid-stride without upsetting his rhythm. His ball-handling was superb, and there were few better kicks in League football. He rarely wasted a disposal and his stab kicks in particular were a delight.

Beveridge was about 179cm (5ft 10.5in) tall and weighed about 76kg (12 stone). He was not super-quick but always seemed to have plenty of time. As a centreman he was a roamer who wandered around the field at will, but was so successful that Collingwood tolerated his tendency to stray from home base. He was not renowned for his marking or for strong play, but he was rarely knocked off his feet. He was a beautifully built and balanced footballer who could ride the bumps and “rough stuff’ in a style similar to that of Fitzroy’s legendary genius Haydn Bunton.

His handballing was a particular strong suit. There were few, if any, better exponents of the art in Jack’s day. The ball just seemed to glide off his hand, and invariably found a comrade in better position. Gordon Coventry once said that Collingwood players used to practise handball with Beveridge so that they would not be embarrassed on the field.

Beveridge’s mastery of handball was not limited to the football field. He was also a champion in the sport of the same name. In the 1930s the sport of handball (a game similar to squash but played with the hands instead of racquets) was very popular. Jack Beveridge was an acknowledged champion, captaining Victorian teams and winning the Australasian doubles title with Ted Galbally (one of the Galballys — Jack’s brother). Although the sport of handball is completely different from its footballing namesake, there is little doubt that the anticipation, balance and speed needed on the handball court helped Jack on the football field.

Beveridge was a scrupulously fair player. He was a deeply religious man who at one stage had seriously considered entering the priesthood. He was a fairly reserved character, not deeply involved in the social side of life at the club. He did not drink until later in life, and in his playing days preferred to spend time with his family. He was also a voracious reader with an intense desire to learn more about the world around him.

Unfortunately that world was in the midst of a severe depression. So when Beveridge was offered a job in Western Australia for the 1935 season he accepted. He continued to enjoy great success as a player in the West (with West Perth), then captain-coached Launceston to a flag in 1937 and Horsham to one in 1938. When he coached in Horsham he worked as a bar manager in a pub and later took over another Victorian country hotel in Coleraine, where he lived until the mid-1960s. Jack’s son, John, became a highly respected recruiter at St Kilda. His grandson, Luke, managed 118 games for three clubs before becoming a development coach at Collingwood from 2009-2010, playing a major role in the club’s 2010 premiership. Luke acted on Jack’s behalf when his grandfather was inducted into the Collingwood Hall of Fame in 2010, and of course also led the Western Bulldogs to the 2016 premiership.

There is no doubt Jack Beveridge left Collingwood too early. He was only 27, and had another few years of top football left in him. After his all-conquering first season, Beveridge had settled in to be one of the club’s most consistent and classy performers. He didn’t have a closet full of trophies to show for his efforts (the Colliers and Coventrys having pretty much a monopoly on those during his nine years at the club), but he did finish third in the Copeland Trophy in 1933 and represented Victoria several times, as well as playing in the four Premiership teams.

To have held down the pivot in those teams was an outstanding achievement. And perhaps the four Premiership medals that resulted were reward enough for any footballer — even one as good as Jack Beveridge.