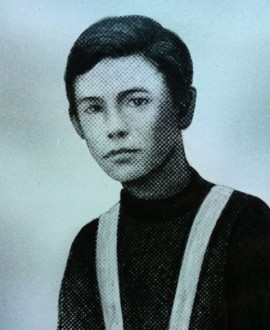 In football’s early days, it wasn’t always easy to combine a professional career with a sporting one. And that’s something Jack Geoghegan (pronounced ‘Geegan’) learned early – to Collingwood’s cost.

Jack was born in Kilmore (as John, but known almost universally as Jack) in 1874. His father was a much-loved and respected local who ran a drapery business, but the family moved to Queensland in 1885 when he decided to pursue a business opportunity. That didn’t quite go to plan, and the family moved back to Melbourne late in 1889.

Jack’s football career began at Xavier College in 1890, and then with the Kew Juniors, bouncing between the seconds and firsts across 1891 and 1892, and even captaining the seconds at times. By 1893 he was a permanent member of the Kew Juniors firsts, playing alongside others who would migrate to Collingwood including Jim Cowcher and F Boyd.

After showing consistently good form with Kew Juniors, he was invited to train with the Magpies at Victoria Park in 1894. He made such a good impression that he was included in the team for the opening round against Geelong.

It was the start of a commendable first season. He missed only two games for the entire season, playing 16 in all. A nimble, running flanker with plenty of pace, he played mostly off half-back or the back pocket, with occasional spells forward or on a wing. He was regularly mentioned in newspapers as having played well without ever starring (although just about everyone had trouble with the spelling of his name, variations including ‘Grogan’ and ‘Legan’), and seems to have been a particularly useful member of the defence.

The Sportsman once described him as “far above mediocrity”. After just his second game, the same paper praised the efforts of both Jack and another newcomer, Frank Hailwood. “Proudfoot has found two able assistants in the juniors Holwood (sic) and Geoghan (sic), both of whom more than bore out the high expectations formed of them in their preliminaries,” the paper said. After another game, The Australasian said Jack’s speed “was of vast importance”. He and Lardie Tulloch “stood to their guns like men”, the paper said.

The two games he missed that year came when Jack’s family moved to take over a business in Geelong. That move meant Jack had to train by himself and travel to Melbourne each Saturday to play, and it speaks volumes for his growing reputation that the Magpies pronounced themselves “pleased” that he had chosen to do so and continued to select him in the teams.

But after the season ended, it became clear that the business in Geelong was struggling, and Jack found himself a job in Alexandra. That made commuting virtually impossible, and Jack reluctantly hung up his boots at senior level. He played a few games for Alexandra in 1895, but returned to Kilmore in 1896 (as did his father, who bought back his old drapery business) and would enjoy a fine career there, going on to captain the club in 1903 and becoming part of the committee. He finally gave the game away when he moved with his own young family to Middle Park.

Jack’s family recalled a man who “loved a singalong, a quiet ale, an occasional bet and good company” and who was also a great tease. He also did some local acting on the stage. He had worked at the local fire brigade in Kilmore, and would also go on to be the auditor for the Kilmore Council.

Had it not been for the pull of business, it seems almost certain that Jack Geoghegan would have managed many more than the 16 games he played for Collingwood in his one and only season at the top level. He was clearly good enough to have racked up a decent senior career.