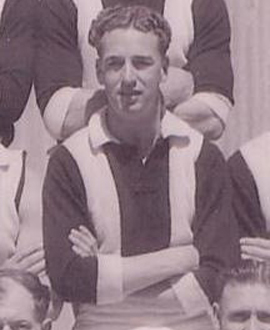 Universally known as ‘Mac’ or ‘Maccy’, John Hill enjoyed only a brief career at Victoria Park, after finding that the competition for spots amongst the Magpies small brigade was restricting his opportunities.

Mac started his career at Beechworth before crossing to Wangaratta, where he played with both Wangaratta and Wangaratta Rovers. He was recruited to Collingwood for the 1950 season after playing – and starring – in a Premiership side with Wangaratta in 1949. He’d also played in a flag with Rovers the previous season. Former Magpie Mac Holten, who was coaching in Wangaratta, had recommended him to the Pies.

Hill played nine games with the reserves during the 1950 home-and-away season and performed well enough to be chosen for the seniors in the second last game of the year, debuting against Richmond on the wing to replace the injured Des Healey. Healey recovered the next week but the Argus reported that the youngster had “shaped well enough to retain a place in the side.” The Age was even more positive: “Playing his first game for Collingwood, J. Hill showed promise on the wing. Pace, safe marking and tenacity characterised his play and he set an example to more experienced players in not letting up.”

Hill kept his place on the wing for the final game of the year against Footscray, and then returned to the reserves for the finals, where he was named among the team’s best players in both matches. He did well in the pre-season practice matches in 1951 and also played in the team that won the 1951 VFL Lightning Premiership, held in May to mark the 50th anniversary of the Commonwealth Parliament and the centenary of the Victorian Parliament. But after another seven reserves games – giving him 18 in all – Mac decided that, with Bob Rose, Lou and Ron Richards, Thorold Merrett and Des Healey, among others, ahead of him in the queue, his opportunities were likely to be limited and he headed back to Wangaratta.

Once home he resumed playing with Rovers. He later went to Glenrowan as captain/coach and led them to a flag in 1955.

A schoolteacher by profession, he taught for many years at schools in Wangaratta.