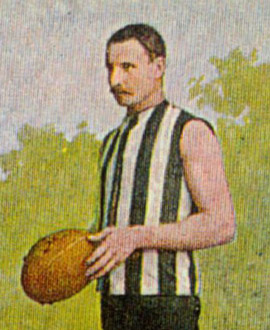 “Jumping for marks is dangerous, I pray you avoid it.” This stern warning regarding the hazardous business of high marking was included in a series of hints to players in an 1876 edition of The Footballer annual.

Luckily, that was advice which Jack Monohan never heeded.

For Jack Monohan had a gift. In his hands, high marking was not only a functional part of the game but also a thing of beauty. Many in football considered him not just the best mark in the game, but the best the game had seen to that point. His marking became the benchmark against which others would be measured.

It had been that way from almost the moment he first pulled on a Collingwood jumper. He had won a fine reputation as a junior footballer with several local clubs, including Phoenix and Collingwood Imperials, winning a trophy for good play with the latter in 1892. The next year he was named captain of a combined ‘second twenty’ junior team that played Melbourne before the season, and then tried out with both Melbourne and Carlton. He spent most time with the Blues, but there’s no evidence he ever played a senior game there.

By June that year, however, he was a Collingwood player, making his debut against Melbourne in Round 10 at the age of 19. He shone on debut, with The Australasian reporting that he “distinguished himself with fine marking” that day. Kickero, in The Herald, said “Collingwoodians should be shaking hands with themselves for getting him.”

He was an ever-present in the senior team from that moment on. The key to his game, of course, lay in his marking. He was a tall, strong man with a huge leap and massive hands that stretched about 38cm from the tip of his middle finger to the base of his palm. He was also remarkably strong, especially in his arms and shoulders – no doubt a result of the work he did operating big band saws at a South Melbourne timber yard (he was reputed to be so skilled with the saw that “he could cut his fingernails with it”). He also had outstanding judgement and was rarely outmarked. Indeed so dominant did he become that opposition forwards were often instructed to spoil him.

But even that rarely worked. His former trainer Wal Lee told The Sporting Globe that Monohan was simply unbeatable in marking contests. “He had a remarkable spring and his fingers, once they touched the ball, never let go,” Lee said. “Although he sprang from all sorts of angles, it is a safe generalisation to say that Monohan never missed a mark.”

Match reports of the day repeatedly praised his aerial exploits, and some commentators went to extraordinary lengths in their search for superlatives, as demonstrated by this passage from The Australasianin 1896:

“Such aerial flights as [Monohan’s], and so much certainty in securing the ball, have seldom been seen on any ground. He was the sun of the local football system, and he shone with a brilliancy that dazzled the beholder. Those who were not present to look upon his incomparable exhibition missed a rare treat. And not alone in high marking, but in resistless dashes with the ball, in enormously long kicks, and in every phase of football he distanced both friend and foe.”

Or this from The Sportsman: “His marking was immense. He went up in the air as if he were going to paint the clouds black and white and descended from his aerial flights to mother earth time after time with the ball in his hands.”

His kicking was more problematic. When clearing from defence he tended to favour long, uncultured left-foot ‘bombs’ out of trouble (always delivered with his trademark ‘one-sock-up, one-sock-down’). Though not always pretty, those kicks were usually effective. But if he ever got in sight of goal he tended to freeze up and he was prone to missing the simplest of shots.

Almost all his best work was done at centre half-back where, with fellow giant Bill Proudfoot at full-back, he formed the most formidable defensive unit in the game. But there were times when he was successfully moved to the forward line, most memorably in the 1896 Grand Final when he helped turn the momentum of the game by taking three huge marks – one of them described by the Argusas “truly remarkable” – at half-forward early in the final quarter.

His performance that day helped establish Monohan’s reputation as a big game performer, and he was at his absolute best in Collingwood’s back-to-back flag years of 1902 and 1903. So good was he in those years that he was rewarded with the Victorian captaincy in 1903.

He continued to display very good form through 1904 and 1905, but his 1906 season was dogged by controversy. During the year both he and Dick Condon were stood down from games because the committee felt they were causing dissension in the team. He returned, played one more game in 1907 in order to qualify for his 15 years service (only the second Magpie to have done so), then moved to Brunswick as captain-coach. He spent a further two years at Northcote, and later goal umpired in the VFL.

By this time the Monohan name was inextricably linked with Collingwood – not only the football club, but also the cricket club and the municipality. Jack’s youngest brother, Cliff, played footy with Collingwood Districts and represented Victoria in cricket. Jack’s son, Jack Jnr, also played football for Collingwood, and other descendents continued the association, one being a scorer for the cricket club for more than 700 games.

Jack and Cliff’s mother, Mary, was almost as famous locally as the boys. She had played a key role in the 1866 capture of the bushranger Robert Bourke at Hurstbridge, rarely missed games of either the cricket or football clubs, and became known for her fanatical support, one day attacking Fitzroy strongman Pat Hickey with her umbrella as he was leaving the field. She later achieved de facto life memberships of both clubs (at a time when women couldn’t be ‘official’ life members). She also did a huge amount of work in the local community, raising money for the blind, the poor and other disadvantaged groups. When she died in 1945 at age 93, the flag at the Town Hall was lowered to half-mast.

Jack, the second of Mary’s 17 children, was a strong, principled man who took life seriously. After one game at Arden Street in the 1890s, an unruly mob of rabid North Melbourne fans came to the Collingwood rooms carrying two coffins, one bearing Monohan’s name, the other Dick Condon’s. Years later, when his youngest brother, Cliff, crossed to North in a fit of pique after being named for his first Collingwood senior game then left out at the last minute, Jack refused to speak to him for several years.

While that story speaks to Jack’s ability to hold a grudge, it also says much about his standing in the game. Only the very best players are targeted in such ways by opposition fans. And over 15 years and 236 games, Jack Monohan proved time and again that he was indeed one of the very best the game has seen – and one of the very few footballers who can claim to have taken some aspect of the game to a new level.