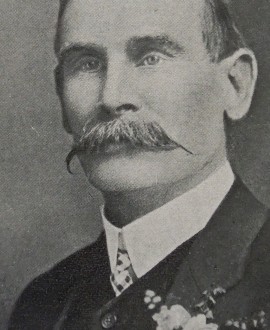 Date of Death
20 January 1945
Recruited From
Britannia
Collingwood Debut
Round 14, 1892

Jack Joyce was known to some as ‘The Father of Collingwood’, such was his impact on our football club in its earliest days. Yet he is a largely uncelebrated figure these days, despite his name adorning the trophy awarded to our third best and fairest player each season.

And that’s probably because so much of the important work Jack did was off the field. Although he was an outstanding footballer, his playing career was largely over by the time the Magpies came into being.

John James Joyce was one of the earliest stars with Britannia, the club that was the precursor to Collingwood. He started playing with the Brits in their first season, 1878, and was vice-captain from the early days. He seems to have been made captain in 1880, and was definitively serving in that role in 1882.

The venerated annual called The Footballer once described Jack as “a magnificent all round player, can be depended on anywhere, cannot be beaten as a back player, is also a splendid kick.” Although his later football focused on defence, he was also known to play on the ball and in the centre.

In many ways, he was too good a footballer to be playing in a second rate competition with Britannia. So, despite his strong Collingwood/Britannia ties, he crossed to Carlton in 1883. He quickly established himself as one of the leading players in the VFA, and in 1884 (the year his brother Tom joined him from Britannia)he was chosen to play for Victoria. The Australasian also named him as one of the best centremen/rovers of the year.

But Jack’s heart still lay at Victoria Park. He remained on Britannia’s committee even while playing with Carlton, and it was only a matter of time before he returned. That eventually happened in 1886, after three seasons with the Blues, when he served as vice-captain to Alf Dean. In 1887 he won a marble clock for good play, and by 1888 he was once again captain. But he wound back his playing commitments after the 1889 season and focused instead on administration.

By this time, the push to establish the Collingwood Football Club had begun in earnest, and Jack was a key part of it. He wanted a club that carried the name of the suburb, and which would be truly tied to it. He was at the earliest meetings, drove much of the support and persisted in the face of early setbacks. He is rightly regarded as one of the club’s Founding Fathers.

In the years to come he would serve Collingwood, and the wider game, in myriad ways. He was a foundation member of the Football Committee, serving 31 years, a League delegate for 14 years, timekeeper in the 1890s, interstate selector for 12 years, a foundation member of the Cricket Committee, and a Life Member of the cricket and football clubs. He was also one of only two VFL Life Members given that honour during their time with the executive (Charles Brownlow was the other)

Yet probably his proudest moment came late in the 1892 season, when the Pies found themselves short of players against St Kilda and threw him and another official into the action, and still won. As The Australasian reported: “The most astonishing circumstance connected with the great achievement is the fact that the winners were shorthanded when they accomplished it, and had to play O’Brien, a fourth-rate junior, and Joyce and Duncan, two of their committee of management.”

But more than just his record of service, Jack Joyce left a huge mark through the force of his personality. When he died in 1945, the club’s annual report noted: “The ‘long long trail’ has ended for our deal old clubmate, Jack Joyce, at the ripe age of 84 ½ years. The ‘Only One’ [a favourite song he would sing at club functions] was perhaps the best known man in the Melbourne sporting world. His inexhaustible fund of humour made him a welcome guest in any company.”

The Sporting Globe had profiled him with similar enthusiasm in 1922: “Readers all! Meet Mr Jack Joyce. You will be glad to know him. He is the sort of man who radiates geniality as the sun does warmth. But if you happen to be interested in the Collingwood Football Club … the introduction will please you even more. For in the inner circles of the powers that control the game, the name of Jack Joyce is one to conjure with. He is, moreover, ‘The Father of Collingwood”, a sobriquet justly earned.

“Collingwood is the apple of his eye. He has a fatherly love for the club and everything connected with It. As he takes you around and shows you the many photographs, trophies and honour hoards … you become aware of a quiet enthusiasm which is as deep as the ocean, and as strong as steel. He knows the game as he knows the club—inside and out—and can discuss it with you from any conceivable angle. Small wonder, then, that he is one of Collingwood’s most valued possessions.”

An entrepreneur who owned a business hauling leather goods by horses in Collingwood, Jack was a significant local figure. When he retired from official Collingwood FC duties in the 1920s, the club presented him with a gift of ₤100 – a remarkable figure for the time, and reflective of how much he was valued. Jack remained a huge part of Collingwood thereafter, and his loyalty to and love for the black-and-whites was legendary. After Geelong defeated Collingwood for the Premiership in 1925, he and secretary Ern Copeland went down to Geelong in the dead of night, and with due ceremony buried a dead magpie in the middle of Corio oval.

It was a fitting gesture when, a few years after his death in 1945, the club decided to name the award given to the third best and fairest player each in Jack’s honour.