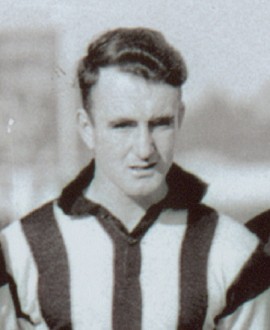 But what is less widely recognised is that McHale’s nephew was also a part of the club during its most difficult decade – as a consistent defender and follower.

His name was Jack Murphy, and he played 169 games across 10 seasons. Such was his ability and impact on the club that he won the Copeland Trophy as a 23-year-old, in 1941, which must have been a source of pride for his uncle.

Neither McHale, nor his nephew, particularly advertised their kin, though neither did they shy away from it. Murphy’s mum, Sarah, was McHale’s sister, but there was never any question of special treatment from the coach. Whatever success he came across, he had to fight just as hard as the other players did.

Murphy was born in Coburg, where the McHale family had lived for a number of years, on February 1, 1918. He attended Marist Brothers School and an obituary decades later spoke of his tales of “of bread and dripping” dished up during the economic calamity of the Great Depression.

Fortunately, he possessed strong sporting genes and took on many pastimes, including football, running and boxing. He played football during the winter months and honed his professional foot running in the summer months.

Boxing was, for a time, a passion, but Murphy’s parents convinced him that it was too dangerous – for his opponents at least.

He was recruited from Caulfield to Victoria Park in 1936, as an 18-year-old, and shone in a practice match with teenage future star Des Fothergill. He made his senior debut in Round 9, 1937, kicking a goal in his first match.

There were only five senior games that came his way that season, but it was a sign he was making an impression with his club and his coach.

Murphy played as a defender in the reserves team in the curtain-raiser to the 1937 Grand Final, but the Magpies lost the seniors and the seconds’ games.

Only five more games followed in 1938, but he enjoyed a breakthrough season the following year, playing 16 games, including the losing 1939 Grand Final to Melbourne.

The Australasian spoke of his potential ahead of the 1940 season, saying “the nephew of Jock McHale … played on the half back flank with dash and success.”

That same year it was noted that his off-season foot running had contributed to his “speed off the mark” on the football field.”

Murphy’s best season came in 1941, when he won the Copeland Trophy, as a dashing defender who also spent some time in the ruck. The “solid follower and defender” won the award ahead of two genuine stars – Alby Pannam (second) and Jack Regan (third).

Off the field, he was a tradesman, with a background in blacksmithing and welding, and he married Patricia in 1942, with the pair having nine children.

During the war years he was employed in essential services, in making some of the army vehicles that were sent off to war.

Through his football journey, he was elected vice-captain by the players and even filled in at times as stand-in for regular skipper Phonse Kyne. He also represented Victoria in state football, was a founding Collingwood Social Club member as well as club life member.

Described as “one of Collingwood’s most reliable players” on the eve of his last season (1947), he was one of the mainstays of McHale’s team through the tough early years of the war and was still a valuable member during the 1945 and ’46 finals campaigns.

In one game in 1946, the Sporting Globe recorded: “Jack Murphy, Collingwood’s safe and dashing in defence, and untiring in the ruck, against more rangy opponents, was the star. (He) has struck form quickly and is now one of the best utility players in the league.”

He could an attacking defender but was also hard around the ball, giving as good as he got, and never shirking any contests.

Kyne lamented Murphy’s decision to leave ahead of the 1948 season, saying: “We will miss Jack Murphy but didn’t we miss Ron Todd, and Des Fothergill, when they went to Williamstown. We simply had to set to and build players to replace them.”

That was a compliment of the highest order for Jock McHale’s nephew, who himself was on the road to being a great coach at lower levels.

He coached Cobden in the western districts, a team that won two flags during his tenure before taking Shepparton to its first Goulburn Valley League flag. He also helped to elevate Mooroopna up the ladder.

That would have made old Jock proud.