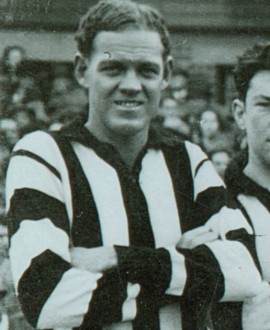 It’s always tempting when looking at a football career disrupted by war to think about what might have been.

But in the case of Collingwood forward Jack Pimm, we should be grateful for what was rather than dwell on the fact that his 58 game-113 goal career was so rudely interrupted.

For what kept him away from the club throughout much of the Second World War, and what he was able to accomplish in that time, were of significant importance to the war effort of his country compared to what he might have achieved in black and white.

He was a good footballer, who sacrificed what might have been the best playing years of his career.

But he was an even better soldier, displaying courage and selfless devotion to those serving with him when winning a Military Cross in Bougainville in 1945.

The beauty of it all was that he returned home – albeit with some shrapnel in his stomach and with malaria – and was able to resume his football career, meaning Collingwood at least got the chance to have him back again.

John ‘Jack’ Huggett Pimm had been born in Avoca, in country Victoria, on October 7, 1920 – five days after Collingwood lost to Richmond in that year’s Grand Final.

When he was 10 he moved with his family to Wattle Glen, a neighbouring town to Diamond Creek, which had been the home of the famous Coventry brothers – Syd and Gordon – as well as Machine member ‘Tubby’ Edmonds.

Pimm played his early football at Melbourne High School, but after he finished his schooling, he had two seasons as a centre half-forward and full forward for Diamond Creek.

The initial approach for him to play league football came from Richmond just before the start of the Second World War. Fortunately for him, and for Collingwood, one of his workmates from the Transport Regulation Board wouldn’t hear of that happening.

The workmate happened to be champion Collingwood forward Ron Todd.

“I was all prepared to go to Richmond,” Pimm said. “A (Richmond) official named Frank Keon said to me: ‘I will take you down to the (Tiger) cubs’, but ‘Toddy’ found out about it.

“I worked with Ron at the Transport Regulation Board, and he said ‘No, you can come down (to Victoria Park) with me’, and that’s how I went to Collingwood.”

He would remember his first encounter with Jock McHale in 1939 with great clarity many decades later, particularly when the legendary Collingwood coach addressed a group of recruits at half-time of a trial match.

“At half-time in the early game, it was the recruits against some of the seconds from the previous year, and they brought Jock in to talk to us during the break,” he said.

“We thought that was something super to have the great Jock McHale talk to us, even if it was pretty simple stuff. On that day, he said ‘Now boys, go out there and get the ball and give it to another Collingwood player.”

He showed enough potential in his first stint in the ‘seconds’ side in 1939, with the Age saying the following year – before he had even played a game – “Pimm … is an excellent mark and created a good impression with his high marking.”

Incredibly, it wouldn’t be long before Todd would controversially leave Collingwood, after receiving an extraordinarily lucrative offer to join Williamstown in the VFA in 1940.

Pimm was listed in the Collingwood senior squad in 1940, with the Sporting Globe’s pre-season guide saying he was “a Magpie fledgling, only 19, and in his first year … (who was) heavily built for a footballer.”

Standing at 183cm, and eventually weighing 82kg, he started the season in the seconds, but his form warranted prompt elevation to the senior team.

That opportunity came in round four, against North Melbourne, at Arden Street. It was a daunting experience for the 19-year-old – Collingwood lost and he failed to kick a goal.

“It was a terrible day,” he explained. “You had to get your own way to the grounds back then, and I had never been to the North Melbourne ground before.”

He was relegated to the seconds the next week, and wouldn’t return until round 15, when Collingwood met North Melbourne again. This time Pimm kicked four of the Magpies’ 12 goals, in the club’s 40-point win and he retain his place for the next three games.

But his season wasn’t over just because Collingwood had failed to reach the VFL finals. He went back to the reserves, and played an important role in the club’s ‘seconds’ premiership, kicking a goal in the process. He played full forward in the game, and the bloke beside him in the pocket was a likely lad by the name of Lou Richards.

Hopes were held high for Collingwood in 1941. But circumstances changed for both the club and their young forward. The impact of the Second World War saw more players enlist, which weakened the senior side, and Pimm became a volunteer cadet for the Diamond Valley detachment. He played reserves football for much of the year, kicking a goal in the ‘seconds’’ grand final at the MCG, but the Pies lost.

Pimm joined the 57th/60th Battalion in 1943, and he was sent to Port Moresby, in New Guinea. There, he met up with another one-time Collingwood footballer Norm Oliver, who had also studied at Melbourne High School. Oliver would be dead within a year.

He would return to Australian on occasions, and would be welcomed back to the club, even having a kick in the reserves if the chance arose.

In 1944, he was sent to Cowra, in New South Wales, where he undertook a junior officers’ training course. It was close to where the Japanese Prisoner of War camp was housed. Not long after he left Cowra to continue his training in South Australia, there was a mass breakout from the camp, where 231 Japanese POWs were killed in trying to escape, as well as four Australian soldiers.

Pimm would be transferred to the 58/59th Battalion and was sent to Bougainville, where the objective in 1945 was to push the Japanese off the island. On one occasion he wounded in the stomach and was only saved by the metal of his belt buckle.

On May 20, 1945, the day after Essendon beat Collingwood by a point back home in Australia, Pimm performed an act of inspirational courage that resulted in a reward far more significant than football could provide. It came at a creek crossing in South Bougainville/Monoitu and it would earn the 24-year-old a Military Cross.

Pimm had been in charge of a patrol sent to gain information about the enemy in an effort to encircle the enemy. But they came under intense fire, and he knew something had to be done to quell it.

His Military Cross citation explained: “Realising the importance of his task, Lt. Pimm, showing great devotion to his duty, outflanked the enemy and crossed the creek to obtain details of the enemy position necessary for the success of the Battalion advance. Displaying great courage, Lt. Pimm made a personal reconnaissance, penetrating deep into the enemy territory.

“He crawled forward into the enemy position, locating dispositions of enemy pillboxes and machine guns. With exceptional coolness, he snatched a machine gun from a post while the enemy were sitting in groups talking and smoking. As the patrol withdrew with its important information, the enemy again opened up with heavy fire, wounding one of the patrols who fell into the enemy fire lanes.

“Showing remarkable courage, Lt. Pimm stood up in the dense undergrowth and directed the fire of his patrol against the enemy. With unselfish bravery, he then rushed forward and dragged the wounded man to safety. Lt. Pimm’s valuable information of the enemy greatly contributed to the success of the battalion’s operations the next day. He displayed personal courage, and audacious and forceful leadership in achieving his difficult task.”

Pimm was almost 25 when the war ended. The shrapnel in his stomach caused ulcers, malaria would come and go for many years, and he spent a period of time recovering in Heidelberg Repatriation Hospital.

Syd Coventry was a guest out at the Pimm household at Wattle Glen as part of his welcome home party. Pimm would have been forgiven for not worrying about a footy comeback, but once he was back in Australia, and in better health, he wanted to try out.

Before the first VFL game in 1946 the Sporting Globe wondered if Pimm might be the forward Collingwood had been looking for since Todd left back six years earlier. The headline read: ‘War Hero Fills Todd’s Spot’, with the accompanying story saying: ‘Pimm’s not Todd, but he fills a champion’s shoes more capably than any other player who has tried out.”

He was back in the Collingwood senior team for his first VFL game in six years by round 8, 1946. Tellingly, he made an immediate impression, kicking four goals in the win over Carlton.

To highlight how much football Pimm had missed, Lou Richards (who had not played a game until the year after Pimm’s 1940 debut, and who had not gone off to war) was playing his 87th game that day against the Blues at Victoria Park.

Eleven games for 12 goals followed in 1947, and then 14 games for 27 goals the next year as he made a contribution even when his health was not at its peak.

Pimm married Esmae Orford in 1947. Incredibly, his wife had been a bridesmaid 11 times before she was married, and she had actually met Pimm at a bridal shower – of all places – as part of his bridesmaid duties. It would be a long and happy marriage.

He would fondly recall McHale’s influence at the club, and how the coach would often take a handful of players after hours to his place of employment – Carlton and United Breweries – for a beer, and, sometimes, for a bottle of yeast.

“Jock used to say (the yeast) would clear your blood,” he said, with a beaming smile. “The stuff would fizz out over the top and the players would line up for it.”

He would also never forget how McHale chastised him after missing a goal at Geelong that would have tied the scores in 1948: “I had the chance to kick it, but I missed it. I walked past him that night, and he said to me: ‘I thought you could do better, ‘Pimmy’.”

Pimm’s best season of league football came in 1949 when he kicked 34 goals from his 13 games. He won the club’s best goal-kicking award that season, and kicked three of Collingwood’s eight goals in what would prove to be McHale’s last game as coach, the 82-point Preliminary Final loss to Essendon.

He played his 58th and final game in Phonse Kyne’s first game as coach, in the round one loss to South Melbourne in 1950, bowing out with the final major of his 113 career goals. He hurt his ankle a few weeks later in the reserves, and retired soon after.

But that was not the end of his contribution to the club. He was appointed coach of the “newly constituted third eighteen” in 1951, and would later coach the seconds, before starting as a club liaison officer with the local schools in 1956.

Fittingly, when Collingwood and Essendon met in the first of their ANZAC Day games in 1995, Pimm was part of a motorcade of veterans, a moment that would live with him forever, and he would continue to maintain a connection with the club until his death, at 95, in 2016.