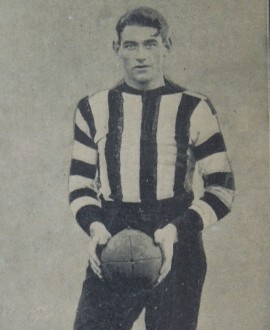 Jack Shorten was a soldier long before he served with distinction in the First World War – and his love of a battle served not only his country, but also his football club, well.

Shorten was one of those young men who loved being a soldier. Indeed in 1907, long before WW1 was even on the horizon, the 19-year-old Shorten had joined the Royal Australian Artillery as a gunner. He spent five years with the RAA, during which time he also began a senior football career with Collingwood.

He’d played suburban football with Sunshine (along with a number of his brothers), and in 1908 trialled in a couple of Collingwood practice games while on duty at Queenscliff. In April of 1909, the VFL introduced a new rule forcing all players and prospective to sign a form and be registered with their nominated club. The Pies remembered Shorten’s promising practice displays and promptly signed up the strapping young man, frustrating at least two other clubs (Essendon and South) that had planned to sign him. Indeed, according to The Argus newspaper, Jack Shorten was the very first player to be registered with the League under the new system.

Even then, newspapers referred to him as “the young artillery man”. So it was no wonder he soon gained the nickname ‘Soldier’ when he landed at Victoria Park.

He quickly adapted to VFL football, playing 15 games in his first season and all 21 in the Premiership season of 1910. He played mostly in defence, usually across half-back, with occasional runs on the ball. He was tall (nudging 6′ in the old language), strongly built and could take a decent mark. ” Shorten once more proved his ability at half-back, where he marked admirably and was always a serious obstacle to opponents,” wrote The Australasian in 1910, a sentence that came to neatly summarise his career. He could look a bit awkward at times but he almost always got the job done, and became one of the Pies’ most reliable players.

He also became one of their most feared. Shorten didn’t mind a stoush, and even in his first year he drew the ire of the local South Melbourne newspaper after what it described as “savage attacks” by him on South star Charlie Ricketts in a semi-final.

But that was nothing compared to what happened the following year. Shorten played a major role in what is still regarded as one of the wildest grand finals of all time. He was a rock in defence all day, and one of the Pies’ best players. But early in the last quarter, he ran from the back line to where teammate Tom Baxter and Carlton’s Jack Bacquie were fighting and belted Bacquie with a fierce blow that lifted him off the ground. Shorten himself was then felled by retributive punches from Carlton’s Jack Sheehan. The Pies won the Premiership, but Shorten was rubbed out for a season-and-a-half for his role in the mayhem (as was Sheehan).

He came back as scheduled in the second half of 1912 and pretty much took up where he left off, playing the remaining nine games of that season and all but one of the next until he dislocated his shoulder against St Kilda in the Round 16 game.

That, as it turned out, was the last game of Jack Shorten’s VFL career. By this stage he was a blacksmith, having served his apprenticeship at the Sunshine Harvester company. He moved to Tasmania in 1914 and played for Waratah, but as soon as the War broke out he was among the first to enlist – though this time, for reasons unknown even to his descendants, he did so under the name ‘Jack Shore’.

Jack became part of the first 4000 soldiers to arrive at Anzac Cove on the first morning, and remained there for a few months. He was quickly promoted to corporal, then sergeant, but re-injured his dislocated shoulder after falling into a deep hole while on a charge in April 1915. He carried on but reinjured the shoulder again in France the next year when he was tripped by barbed wire and fell into a shell hole, eventually having to be sent to England to recover before returning to France.

In between times, he won renown as a solider of great courage and determination. In August of 1916 he was recommended for a military medal “for conspicuous gallantry and devotion to duty” during an operation at Pozieres. The recommendation said that “by his gallant conduct and fine example during heavy bombardment of our trench on 25 July, he, being the only senior NCO left in his company, kept his men well under control and placed them in best available cover and commanded them with zeal and ability.”

Fortunately, Shorten was able to use his time in England for more than just recovery. He eventually married an English girl, and when he returned to Australia after a storied army career in 1919 it was with a wife and child.

Jack ‘Soldier’ Shorten packed a lot into three-and-a-half seasons at football’s top level. But that was nothing compared to the service he gave his country on the battlefields that matter most of all.