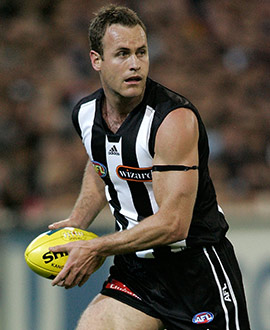 In a post-season meeting in September 2000, coach Mick Malthouse and recruiting manager Noel Judkins were discussing the characteristics required of the defender Collingwood so desperately required. Judkins offered: “We really need a bloke that’s six foot three, and can run and do the disciplined things, and is good overhead.”

Judkins suggested someone he thought  fitted the bill, a Fremantle backman looking for a fresh start after five seasons. “”We like James Clement,” Judkins said to Malthouse.

The coach’s response back was effusive: “Jesus, I love James Clement.”

That set in motion Collingwood’s chase for a player who would quickly become the cornerstone of its defence. In time, he would also become a prototype for future backmen capable of playing on both tall and small forwards.

Malthouse, it turns out, had unsuccessfully tried to recruit Clement as a teenager to West Coast. The coach had watched him as a junior in the mid-1990s, but the Dockers had first dibs as part of their zone selection options, given that he had played with South Fremantle in the WAFL.

He made his name at South as a mobile half-back and winger, but once he joined Freo he spent most of his time in defence, quickly becoming a regular in the seniors. In 1998 he had a brief burst of success as a forward, kicking five goals in consecutive matches against West Coast and Essendon, but mostly he was a defender.

He played all 22 games for the Dockers in 1999 but managed just eight the following year. Malthouse was by now at Collingwood, so when Judkins suggested Clement was frustrated and might be gettable, the coach couldn’t have been keener. He’d actually kept in touch with Clement over the years, and the two were keen to work together.

At the end of 2000 he was traded to Collingwood in a complex deal that saw him joined in black-and-white by Fremantle small forward Brodie Holland, while Paul Williams headed to Sydney. And as good as Willo was for the Swans, nobody doubted that the Pies ended up with the best of that deal.

Clement was an instant hit at Collingwood, snagging three goals in his first game (only 10 more would come in his Magpie career). He was understated off the field and could not stand hype. On the field, he loved the contest, hated fuss, and preferred a low-key approach. He was tall, strong, good overhead but also quick and agile, capable of playing on both tall and small forwards. An educated man, he was one of those players who was never going to have to rely on his football career to steer him through life, and yet he played the game as though his life depended on it.

He rapidly developed into one of the game’s premier defenders, missing only six games in his first six seasons at the club. His durability amazed some teammates. In a contest against his former side in 2004, he played three quarters with a suspected fracture cheekbone. And in a practice game earlier that year he suffered an eye injury that would not stop bleeding for two days, prompting concern over the health of his eyesight.

Clement’s consistency and his rare ability to win his contests, regardless of the result, saw him become a star in a revamped team that would contest the 2002 and 2003 Grand Finals. He was third in the Copeland Trophy in his second season at the club, and also shared the best finals player award that year. He then won consecutive best-and-fairest awards in 2004 and 2005, and finished second in 2006. He was named in two All-Australian teams (2004-05), though some of his teammates insist he should have been selected in more.

“He was probably the best defender in the competition for two or three years,” Scott Burns maintained. “He was an All-Australian lock. I still can’t believe he didn’t make it (the team) in a few other years.”

Clement took on and eclipsed some of the best forwards of his time, and is widely remembered for one clash in 2006 where he outpointed Essendon’s James Hird so comprehensively – often with perfectly timed subtle nudges under the ball – that the AFL subsequently introduced the “hands in the back” rule. “He absolutely dominated James Hird that day,” recalled Burns, “and Hird sooked and Essendon sooked, and we got the stupid ‘hands in the back rule’ as a result.”

Clement could play on power-marking big men or the fleet of foot, mobile smaller attacking players, which set him apart from other more predictable, one-dimensional defenders.

“Jimmy could play on the smallest of forwards and the tallest of forwards, and he would knock them all over,” Nathan Buckley said. “He was hard, really hard, and he made himself that on and off the field.”

He was rarely beaten one-on-one, was an exceptional rebounding defender and in an age where metres gained was not necessarily a focus, his ability to break free from his opponent and roost the ball 60m out of the defensive zone was a huge part of the Magpies’ game plan. He was a beautiful kick of the football and rarely missed his targets.

But more than anything it was class and composure that James Clement brought to the heart of Collingwood’s defence. He was cool, unruffled and seemingly always in control. The whole defence seemed tighter and more assured from the moment he stepped into it.

As understated as he was off the field, Clement proved extraordinary guidance and inspiration on it, and stepped into the captaincy breech whenever Buckley was missing.

It wasn’t until 2007 that injuries began to catch up with him. He managed only 13 of 25 games that year, missing 11 straight with a calf injury. He returned in Round 18, and did not miss a beat as the Magpies won their way through to another finals series.

Fittingly for a player who won the club’s best finals player in 2002 and 2006, Clement was among Collingwood’s best players in the heartbreaking preliminary final loss to Geelong in 2007. Few took much notice when he gave a wave to the crowd as he left the MCG that night. He was 31, and seemed to have so much more left to give, almost certainly as the next captain.

But Clement was ready to move to the next phase of his life, helping to support his wife, Jeanne, who was undergoing a health battle. He quietly gave the game away, with no fanfare, no media conference and no looking back. For a guy who eschewed the limelight for so much of his career, it seemed the perfect way to go out.

James Clement finished his career as one of the AFL’s most respected defenders of the early 2000s, and his legacy was upheld by several of his younger teammates such as Nick Maxwell and Heritier Lumumba, who regularly cited Clement’s influence as a key driver behind the nucleus of the group that was to take out the 2010 premiership.