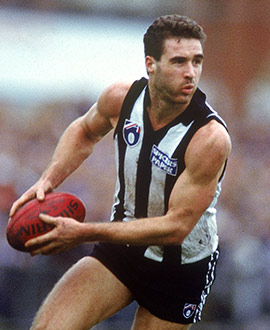 A tall Taswegian who was an excellent contested mark, Manson endeared himself to Collingwood supporters with an unconventional and occasionally unreliable kicking action.

His role in the 1990 premiership triumph cannot be understated, for his relief ruckwork helped Damian Monkhorst overcome Essendon powerhouse Simon Madden in the decide.

Persistence and willingness to work hard were his greatest assets from the get-go, breaking into the senior side in the opening round of 1985 against North Melbourne – the first match played for premiership points under lights. Manson played 17 senior games, serving notice with a haul of five goals against Hawthorn in just his seventh outing.

Appearances were more limited in the two years that followed but he re-established himself as a regular in 1988, winning a career-high 198 hitouts.

He played all 26 games in the premiership year of 1990, kicking 33 goals with a high of four against Carlton in round two, as well as representing Tasmania against Victoria B.

Manson slotted five in the big win over Adelaide the following year but found the going tough as Monkhorst made the ruck his own in 1992.

He played just one match after round 13 and crossed to Fitzroy, where he played his last 47 games.

Manson enjoyed some fine outings for the Roys, receiving three Brownlow votes against Essendon in 1993 before bowing out in the final round of 1995.