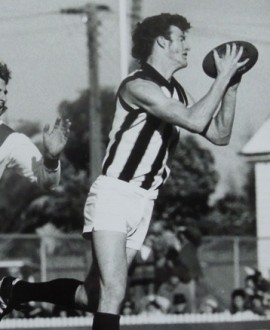 If you believe in omens, then Jeff Clifton was always going to be a Collingwood player. For a start, he came from a club called Floreat Park, and Collingwood’s motto is Floreat Pica (‘May the Magpie Prosper’). Plus it’s not widely known, but Collingwood’s first feeder club back in the 1890s was based on a local club called ‘Clifton’.

So any way you look at it, Jeff Clifton was destined to be a Magpie. And destiny delivered the club a fine full-back and great clubman.

Floreat Park was a junior club in Western Australia, and by the end of 1966 Jeff had established a glowing reputation for himself there as a  key forward of great promise. He had won best-and-fairest and goalkicking awards five years in a row, including kicking a handy 15 goals in one game.

His father, Norm, worked at the Commonwealth Bank, and in 1966 the bank told him they were transferring him to Melbourne to manage one of their branches there. Norm came east on a business trip and, while in Canberra, mentioned to a Collingwood spotter he met there that the family were moving to Melbourne, and that his kid had some potential. The Magpies made enquiries, then moved quickly: secretary Gordon Carlyon flew to Perth in January of 1967 and met his parents, and when they arrived in Melbourne a few weeks later, Carlyon was there again. Jeff signed up soon afterwards.

It was a pretty big punt from the Pies. They’d never actually seen Jeff play, and he hadn’t even played senior football at that stage. His first games against men came in the first Collingwood intraclub practice matches of 1967. And Jeff learned a painful lesson early, having his nose broken in just his second game!

He played with the under-19s that year, and cracked it for a couple of reserves outings too. At this stage he was still playing mostly at centre half-forward, kicking a few goals along the way, and did well enough to finish third in the U19s best-and-fairest. He then spent 1968 entirely with the seconds as the Pies hastened slowly with his development. But by Round 8 of the 1969 season, the selectors finally decided the 20-year-old was ready for a senior debut.

By this stage the gun young forward had become a key defender. He’d been tried at both centre half-back and full-back during the 1968 season and had more of an impact than he’d had up forward. At senior level he settled in at full-back immediately, missing only two games, through injury, for the rest of 1969 and putting together what one newspaper described as “a dazzling rookie season in which he was hailed as the next Jack Regan”. He would win an award as Most Promising first year player at the end of the season.

The Regan comparisons might have been a touch over the top, and did him no favours, but Jeff’s impact was immediate. He stood about 6’3” tall and weighed 12.7 and was finely, almost angularly, built. He had a composed, unruffled approach to football that made him look classy – and he had a raking, left-foot kicking style that added to that impression. He was always composed, even in the last line of defence, and was happy to play a close-checking style whenever needed. He was also good in the air, and quick across the ground. He wasn’t especially flashy, but prided himself on consistency and persistence.

He was also an unusually thoughtful footballer. Each Thursday night he would sit down with coach Bob Rose and his defensive teammates to plan their strategies. Then on Friday he would spend hours looking at his own opponent and how he might best counter him. It’s commonplace these days, but back then it gave Clifton a decided advantage (as well as causing him a few sleepless nights along the way – he could get a bit nervous playing the games over in his head).

Jeff needed every trick in his locker, whether physical or mental, to play full-back, because he’d unfortunately stumbled into an era of great full-forwards. Peter Hudson, Doug Wade, Alex Jesaulenko, Geoff Blethyn … it was a terrible time to be a full-back. And Clifton definitely had days when he had a bag kicked on him. But so did pretty much every full-back in those times – and Clifton held his own more often than many. He wasn’t a star full-back like David Dench or Geoff Southby – he was underrated in many quarters – but he was reliable and consistent.

So it came as something of a shock when he was dumped by the Ern Clarke regime after an injury-interrupted 1974 season. Clifton was shattered, and crossed to Fitzroy where he played nine further games before a broken leg ended his VFL career. He would then go on to play with Greensborough, and remained playing at local level until the mid-1980s, ending with Super Rules club Diamond Valley.

Clifton had been one of the club’s hardest workers while at Victoria Park, splitting his time between football and his engineering degree from Melbourne Uni. After he graduated, he set about his work as a civil engineer and gradually built that into a multi-million dollar development firm, through which he was closely involved with the building of the Ponsford Stand at the MCG. He also returned to Collingwood and became a stalwart of the Past Players Association, becoming a Life Member.

Jeff Clifton died at just 61, from prostate cancer, in 2010. The Past Players tribute to him provides the perfect final words: “[He was] a wonderful contributor toward the welfare of our past players. Not only was Jeff a great player in his 102 games for our club, he was a friendly sincere man with a genuine interest in others. He will be sadly missed by the Magpie family.”