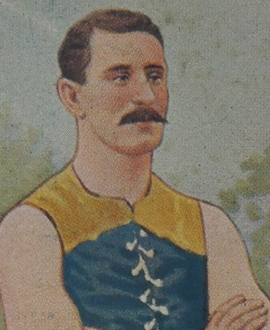 Jim Flynn is definitely a player whose story can be filed under the “one who got away” category.

He played a solitary game for Collingwood in 1896 but would later enjoy a celebrated career with both Geelong and Carlton, captaining the latter to two Premierships and eventually totaling nearly 150 VFL games. Ouch.

Flynn was born in Benalla in northern Victoria and first achieved fame as a local sporting star. “They say he can kick sixty yards every time,” wrote one newspaper around the time of his Magpie debut.

That came on 30 May 1896, against Carlton, when he was named on a half-forward flank alongside ‘Charger’ Hailwood, in a game noteworthy for the fact that the game went six minutes longer than it should have because of timekeeper error, with Collingwood’s winning goal controversially coming during that extra time. His debut attracted little attention, though The Sportsman newspaper named him among the Magpies’ best half-dozen players.

That was the last the VFA saw of him for that year – but that solitary appearance was to have huge ramifications for his home town team. Upon returning to Benalla, Flynn was granted a permit to play with Telford. But in the last game of the year he turned out with Benalla, against Euroa. Benalla won, giving them the flag. But Euroa protested successfully, the result was overturned and, with it, so was the premiership, which went to Euroa instead.

It’s not known why Collingwood didn’t persist with him or even whether it was Flynn who opted to return home. But either way, Geelong pounced swiftly (he was friends with Henry Young) and brought him down for the first season of the VFL in 1897. By this stage he was already 25 years old, and perhaps wouldn’t have been expecting a long career. But he would go on to play 72 games and kick 22 goals in six seasons with the Cats, and then a further 77 and nine goals in a further eight seasons with Carlton. He played until he was 39, captaining the Blues for three years, including the 1906-07 flags. He still holds the record for the oldest player to play in a VFL/AFL final.

“Although not particularly tall at 179 cm, Flynn was an intelligent and versatile follower who was always looking for ways to counter larger opponents. A natural athlete with a good spring and sure hands, he often sharked the taps of his opponents by feigning to jump for the ball, but intercepting it himself. He kicked long off either foot, and developed into an outstanding leader.”

Legendary coach Jack Worrall said: “It is really extraordinary that in the small but select band of the most excellent exponents that the game has seen that J. Flynn should be the only two-footed artist. It seems almost inconceivable, and for that reason, and also for the fact that he was a great leader, he is entitled to place among the immortals… [he is] the best captain since the days of Alex Dick, and one of the best and most finished all-rounders the game has produced.

“He could play anywhere, and hold his own with any man in any branch of the game … he was a natural centre half-back, a splendid centre man, with a 50 yard kick with either foot, was a good runner, a great follower, and a dangerous forward, as he could both mark and kick. Added to his versatility as a player he was a leader of men … he was an inspiration to the men under him, and had the knack of pulling the side together when required.”

All that could have been Collingwood’s. But for reasons we’ll probably never know, Jim Flynn’s one-game adventure at Collingwood never turned into anything more substantial. And that, pretty obviously, was our loss.