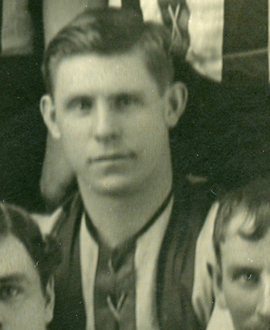 When fans talk about great footballing families, the Gregory clan rarely gets a mention. But they have a seriously impressive record, certainly in terms of numbers – almost enough to fill an entire team!

Jim Gregory was born in 1876 in Ballarat, pretty much the middle child of the 14 that came from their parents, George and Christine. No fewer than 11 of the brothers played high level football. Jim was arguably the best-performed, joining Collingwood in the last of its VFA years and spending six seasons at Victoria Park in all. But Colin played for St Kilda, Jack for Footscray, Fred, Arthur, Harry, Duncan, Compton and Frank all for West Melbourne and George and Charlie for Ballarat.

Three of Duncan’s sons would also go on to play VFL football: Johnny played 156 games with North Melbourne, Harry played 89 with Essendon and Bruce played a solitary game with the Roos.

During a charity carnival at North Melbourne in the early 1930s, 13 of the 18 players on one side were members of the Gregory family – and a long-retired Jim umpired! They were also multi-talented, and on one occasion the 11 Gregory brothers challenged a champion team from the West Melbourne Baptists – and beat them comfortably.

So it’s fair to say that footy talent ran in the genes of the Gregory boys from Ballarat. Jim joined Collingwood from there in 1896, and later that year returned to his old home turf with the Magpies when they visited Ballarat. As it turned out, Jim lined up on one of his older brothers that day, and the local paper admiringly noted that, even though Jim was lighter and younger than his sibling, he “frequently brought his brother down heavily in the slush”.

Jim had settled well into life at Victoria Park. He was a nippy, hard-working little rover/forward who had a great eye for goal. The Australasian complimented him on his “excellent roving” in one game, and The Herald noted after his first couple of games: “The Magpies are quite satisfied with young Gregory’s form. His kicking is immense.”

As noted, Jim loved a goal. He snaffled one on debut and kicked three others in the nine games he played that year – including, most memorably, the first goal of the Grand Final against South Melbourne that helped deliver the club’s first flag (from what was described as “a nice snap shot”). Heading into the game, The Leader praised Jim for his “excellent attacking work” throughout the season, and his efforts in the forward pocket that day justified the pre-match raps.

Jim’s position in the team grew even more secure in the years that followed. He was a regular throughout 1897 and 1898 and seemed destined for a long career. But he seems to have been injured in 1899 (the year when the players voted him in to become one of their representatives on the committee) and played only two games. After the first of those, The Age noted: “Gregory, whose first appearance it was for some months, showed that his long spell has not dimmed his pristine glory.”

But the absences continued into 1900, although he was able to play eight of the last nine games, reviving hopes of a comeback. But those hopes were dashed when he could manage only one further game in 1901 before being forced into retirement.

Jim would later take up umpiring, joining the VFL list of umpires in 1908 and going on to run the boundary in 31 VFL matches (and field umpire in the country as well). For someone who loved the game as much as Jim Gregory – and his broader family – obviously did, that was a nice way to end a football journey.