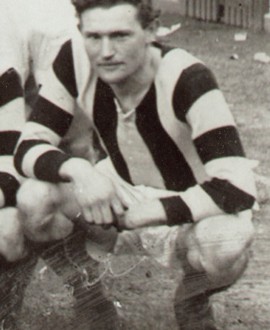 Few footballers have ever experienced a more bizarre season than Jim Shanahan lived through in 1927.

After three years and 42 games he had established himself as a regular in a very good Collingwood side. He was a hard, aggressive back pocket or half-back flanker who loved to take on both the game and his opponents. A policeman by profession, he was once described as “a wild Irishman”: he wasn’t tall but he was solid and willing and loved crunching into packs, and clearing the ball long out of defence.

He was born in Western Australia but had come to the VFL from Horsham, where he was already a police constable. He debuted for the Magpies against Geelong in the seventh round of 1924, after which The Herald noted: “Constable Jim Shanahan, from Horsham, who was spoken so highly of by Bill Twomey, of Stawell but formerly of Collingwood, had his first show with the Magpies against Geelong, and his play met with the entire approval of most reliable critics. They described his game as being safe and sound.”

And that’s the way his game continued to develop. Although he didn’t mind a bit of physicality, he was largely a ball player, as The Football Record noted after he’d kept Fitzroy forward Jim Moriarty quiet in a 1925 game. “Shanahan is to be commended. You will always notice that a good player always concentrates his attention on the ball, and not on the man.”

Shanahan wasn’t a star but he was certainly a good, solid player – good enough to have twice represented Victoria. It seemed he was set for a long career.

But then the Pies dropped a bombshell.

Just five days out from the first match of the 1927 season, Collingwood announced it was dumping its captain, Charlie Tyson. Largely lost in the furore that followed – and it was one of the biggest football stories in years – was the fact that several other senior players were let go at the same time. Jim Shanahan was one of them.

Like Tyson, there were initial whispers among some sections of the Magpie fraternity that Shanahan had been dropped because he had taken a bribe in the 1926 Grand Final which Collingwood had lost. Unlike Tyson, those whispers died down more quickly (and never made sense in the first place, given he’d been warned for spiteful play during the ’26 decider).

But it was still a major shock. There seemed no reason for the Pies to drop a first-team regular who was still only 25. And there was seemingly no bad blood from Shanahan’s end: a few days later he sent new captain Syd Coventry a telegram which read, “Congratulations, Syd. Set your teeth. Best luck to yourself and boys. — Shanahan.” It was a sporting touch from one who must have been gutted.

It was, in so many ways, a mysterious decision. Carlton pounced on the opportunity and quickly signed Jim up, debuting him in Round four. But after just two games at Princes Park, Shanahan returnedto Victoria Park midway through the 1927 season!

That meant he came back just in time for the club’s much-heralded train trip to Western Australia late in the season. And there he was named as the Magpies’ best player when they played against a combined WA side. He even kicked a couple of goals, in some rare forays forward. But it wasn’t enough to gain a senior spot, and he spent his entire time back at Collingwood with the seconds, while the team went on to win a flag.

That wasn’t the end of his time in football though. In 1928 he crossed to Fitzroy and played a further 17 games. He was appointed captain/coach of Camberwell in 1929 but resigned after just five games, returning to Fitzroy. He joined Williamstown in 1930, where he became known as a tenacious full-back, and was made playing coach of the Seagulls the following year, but was forced to resign before the beginning of the season by the Victorian Chief Commissioner, who ruled that members of the police force couldn’t be football coaches. Nonetheless he continued to be involved in football for much of the rest of the decade.

According to one newspaper, Jim Shanahan was renowned for his “ready smile”.  He might not have been smiling too much after his Collingwood career was summarily ended early in 1927, but he still made the best of a tricky situation and ended up with a fine VFL career totalling 71 games with three clubs.