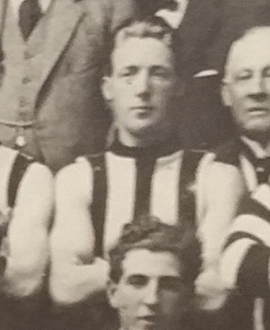 Playing senior football in the VFL/AFL is a wonderful achievement in any circumstances. But doing so just three years after you’ve been lying in a London hospital having suffered severe gassing on the battlefields of France borders on miraculous.

That’s the remarkable story Jim Keogh was able to tell, however, after he survived poisoned gassing in the First World War and was able to resume playing footy the next year, and spend a brief time at the top two years after that.

James Joseph Keogh was born in Mitcham but went to school at the famed footballing nursery of St Patrick’s in Ballarat. While there he also served four years with the local senior cadets, before being transferred to the district’s citizen forces in 1915. He joined the AIF in May of the following year, aged 18, and headed off on the Ulysses in October. He arrived in Plymouth just before Christmas, and by midway through 1917 he was off to France, where he served as a gunner.

And it was there that he was wounded in action in March 1918, the victim of what his service records describe as ‘severe’ poisonous gassing. Two weeks later he was invalided to hospital in London, where he remained for more than a month. He rejoined his unit in August of that year, and returned to Australia after the War ended, arriving on the Ormonde at the beginning of August, 1919.

Remarkably, he was back playing footy, for Canterbury, just two weeks later! That team included future Magpies Les Lobb and Harry Lloyd, and two of Jim’s brothers, Thomas and William. The three Keoghs were back again in 1920, and it was from there that Jim tried out with Collingwood during the 1921 pre-season.

Most of Jim’s footy was played on either a half-back flank or in a back pocket, although he was also tried in forward line equivalents from time to time. He only stood about 175cm tall, but by the time he returned from the War his weight had increased more than 10kg from his lightweight 63kg at enlistment. His courage was never in doubt, and one day later in his career he played the second half of a game with a broken collarbone.

After some handy showings in the practice matches, Jim was chosen on the half-back flank against Melbourne in Round 2, but didn’t have much impact and was dropped. He returned to the team against South Melbourne in Round 6 – this time on a half-forward flank. “Keogh showed form of nice promise half-forward against South, and more will be heard of him. He has that stock of gameness and grit without which no one is wanted on the voyage at Collingwood,” wrote The Football Record.

Despite those kind words, he was dropped again the next week, returning for two more games later in the year. The first of those, against Fitzroy, was his best. Returned to defence, he defended well and also set up Dick Lee for one goal when he was moved forward. The Argus said later that he had “caught the eye of the club’s followers”, and had “shaped admirably in a trying game”.

The next week he started in the forward pocket but had little influence and was again dropped. He tried out again in pre-season for 1922 (one of his brothers also tried out at the same time) but didn’t win a place on the senior list, so turned out with Brunswick in the VFA, where he spent four productive seasons. He returned to his roots at Canterbury after he’d finished with Brunswick, and in 1933 moved to Ainslie in the ACT, where he coached for five seasons.

Along the way he would almost certainly have faced tough times and endured hardships – such as playing with a broken collarbone. But it’s fair to say that, once you’ve survived severe poisonous gassing on the battlefields of France, the ups and downs of football probably paled by comparison for Jim Keogh.