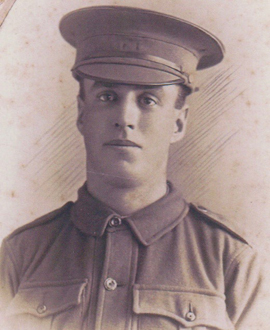 It’s a story that sounds like it has the makings of a TV mini-series: three brothers from a small Victorian country town head off together to fight in the Great War. One of them doesn’t make it home, and his brothers end up helping to farewell him at a lonely outpost on the battlefields of Europe.

Unfortunately for one-game Collingwood player James Seaton, that’s exactly how the story panned out. But there was a tragic twist that must have made it even harder to endure.

Jimmy, as he was mostly known, was a strong, strapping country footballer who was a star in his home town of Corryong. The Seatons were a big name in the town (Jim’s grandfather owned and ran the local paper for many years), and Jim was part of a large family. The two members closest to him in age were two of his older brothers, David and Alex, and they played local sport together. They were joined by the youngest of the Seaton clan, John.

At the end of 1912, after the country football season had ended, the 21-year-old Jimmy was invited down to Collingwood for some training sessions. He impressed the Magpie selectors enough to be given a trial in the last game of the season, against South Melbourne at Victoria Park. Local legend has it that Seaton drove to Albury 120km away, caught the train down to play and came back by train the same night.

The Pies lost, ending their season, but Seaton kicked a couple of goals from half-forward and did enough to impress observers that he had a bright future, even if those journalists weren’t quite sure of his name. “A young fellow named Leaton, from Corryong, showed promise,” according to the Australasian.

In the end, though, his VFL career came to nothing more than that one game. He seems to have returned to the farm at Corryong and resumed the country life almost immediately, and it could well be that he never wanted to leave in the first place.

The other thing that might have influenced Jim’s career decisions was the death of his father, Robert, in the year after his return from Collingwood. Unfortunately that was just the start of a period of tragic misfortune for the Seaton family.

When the First World War broke out, four of Seaton boys – Alex, David, Jimmy and John – decided to enlist. David left early in 1915, and the plan was that John, who was living in Melbourne by this stage, would return home in 1915 with a view to joining up with the others. Sadly, he contracted meningitis while at home and died at just 22 years of age.

Jimmy and Alex grieved with their family, enlisted together early in 1916, then headed overseas in May and joined the 37th battalion together as part of the 1st reinforcements. They spent considerable time in France, and it was there, in June 1917, that Alex died from gunshot wounds during a fierce battle. The local Corryong papers sorrowfully reported that both his brothers were at his funeral in the northern French town of Boulogne.

Jimmy eventually returned home in 1919 and went on to resume his active role in local life, ending up in a senior position with the Cudgewa Dairy Company. He also served as President of the Corryong Football Club. He had lost his father and two of his brothers in the space of just a few years – an unimaginable burden for any young man to bear. And the saddest thing of all is that he wouldn’t have been the only one in that situation during those awful years of the First World War.