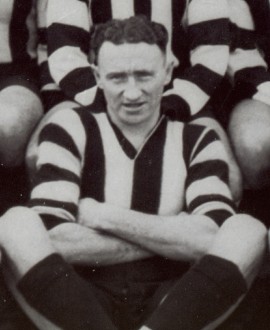 Jock Morison didn’t spend long at Collingwood – just one year for five games as the Second World War broke out. But it was a pure accident of fate that he was anywhere near Victoria Park in the first place.

Jock was born (as John) at Seymour in 1914, but his mother Mary died in the days after his birth. His father worked on the railways at Seymour, which meant frequent travel and an inability to care for a newborn. So John was brought to Melbourne, destined for an orphanage in North Melbourne. But the orphanage administration wasn’t open on Sundays, so his father took him to his sister Jane’s house for the night. But Jane wouldn’t hear of letting young John go to an orphanage and offered to bring him up.

Jane and her husband were the park rangers of Studley Park, and their house was near the east side of the river at the Gipps St footbridge, providing John with an almost rural upbringing (they had cattle and horses), yet very close to Abbotsford. When he was in his teens, the family moved to Sydney Street Collingwood, just near the corner of Hoddle and Johnston Streets, and John attended Collingwood Technical School.

He played footy at school, and afterwards at Richmond Amateurs. In 1936 he was asked to trial with both Richmond and Collingwood, and after a second trial with the Magpies in 1937 was asked to play with Collingwood Districts, which were then effectively the Collingwood seconds. He made something of a name for himself as a running defender over the next 18 months, and midway through the 1938 season received the letter he’d been waiting for, noting that due to his good performances with the seconds, “Jock McHale requests you to begin training with the seniors immediately.”

That still didn’t bring a senior debut, but he played particularly well during the practice matches in the 1939 pre-season, and the Magpies started talking up his chances of promotion. “Morrison, who was on the list last year but did not play in a senior game has developed into a solid pocket player of intelligence,” wrote The Argus.

He still didn’t make the initial senior list, but was elevated in early May. Then, just five games into the 1939 season, after the Magpies had suffered a bad loss to St Kilda, John Morison – by now known as Jock – made his senior debut at the comparatively old age of 24.

He considered himself a centreman but got his chance that day at half-back against Fitzroy and did well enough to hold his spot, the club describing his game as “most impressive”. After his second game, against Hawthorn, The Sporting Globe was moved to remark: “Playing only his second senior game, Morison did a splendid job for the Magpies. Stationed on a half-back flank, he was switched over at quarter-time to take care of [Hawthorn small man Les] Pabst. Morison’s ability to pace it with the elusive wing half-forward entitled Morison to a high ranking.”

Strangely, after such a glowing review, he was dropped for the next game. And he was in and out after that, managing three further senior games – all at either half-back or in the back pocket – but none of them in succession. He was also part of the tour to Tasmania, with games played against Claremont and Richmond.

Early the following year, after a few more games with the seconds to take his tally there to 46, he was cleared to Northcote in the VFA. He played 13 games in his solitary year at Northcote before the VFA competition was suspended because of the Second World War. Jock joined the army in 1942 as a truck driver with the 10thField Regiment in WA. He would go on to serve in North Borneo in 1945 and in various camps within Australia. He also played some services football.

After the War he did some coaching with Richmond Districts, and joined the transport group of TAA when the airline started out in 1946. He stayed in the job for 25 years, settled in Reservoir and raised a family of fanatical Collingwood supporters who remained committed to the club long after his death from leukemia in 1991.

For somebody who was born a long way from Collingwood, that is perhaps the best epitaph of all. Jock Morison started out as a little boy who’d lost his mother, but found a new family with his aunt, and another through football. It says much about the way he threw himself into Collingwood, at both reserve and senior levels, that the club became such a big part of his, and his family’s, life.