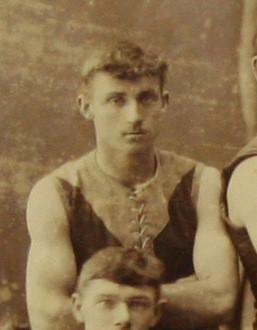 The process of appointing Collingwood’s first ever captain was a surprisingly messy one.

The subject was discussed at a players meeting at the Yarra Hotel on the morning of the team’s first practice game against the Clifton Football Club in April of 1892. The plan was to get changed there, elect a captain then walk to Victoria Park. But that seemingly simple task degenerated into fisticuffs, with two players reportedly coming to blows over the captaincy issue!

In the end it was Alf ‘Doney’ Dean, a former Britannia player, who led the Magpies out that day. But he was quickly abandoned, apparently for being too old, and a second skipper, former Fitzroy and Britannia player Joe Delahunty, was appointed in his place. But then Delahunty fell ill before the first game, and Tasmanian stalwart George Watt eventually claimed the honour of leading the Pies in their first ever game.

Still, it was Delahunty – formally named William Joseph but known widely as Joe or ‘Dilly’ – who was the man officially appointed as the first captain of the Collingwood Football Club.

His election seemed like a wise one at the time. Collingwood’s players in 1892 were woefully short on experience, and Delahunty had that in spades. He’d already enjoyed a fine career at Britannia in the 1880s, and in 1890 and 1891 had performed with distinction for Fitzroy in the VFA. He played mostly in defence for the ‘Roys, where his splendid high marking and long kicking proved to be great strengths.

He was a tough, doughty campaigner. One newspaper described his play as “vigorous and thoroughly efficient”, while another noted that he had “defended brilliantly”. The Fitzroy City Press, however, felt he was better suited to a role at half-forward, where he was moved midway during 1891.

At Collingwood, after being chosen as skipper, he missed the first five games of the season through illness. He made his debut against Richmond in Round 6, but then missed the next two games as well. It really wasn’t an auspicious start to his Collingwood career.

Things improved thereafter and he played the rest of the year, mostly at centre half-forward or in the centre. He even kicked a rare goal in one of the last games of the season.

But the truth was his career at the highest level was coming to an end. Collingwood had wanted his experience but his age began to tell. After a promising start in 1893 – newspapers reported that he was being considered for selection in the Victorian intercolonial team against Tasmania – he once again fell ill and had to withdraw. He managed only one more game before returning to junior ranks, first with Collingwood Juniors and then with Brunswick (he was a Fitzroy/Brunswick local).

He maintained a high level there, and even represented the Combined Juniors team against Essendon in 1895. At the start of that year he asked to address the committee of the Brunswick Football Club and promised them a grand future, complete with lights to be installed at the Brunswick Cricket Ground. He also promised he would take them all on a trip to Footscray if they won the flag that year! He stayed involved in local football and cricket (he was a handy all-rounder) until the turn of the century.

Joe Delahunty had already played his best football by the time he got to Collingwood. But that didn’t stop him securing a place in the history books that nobody was ever able to take away.