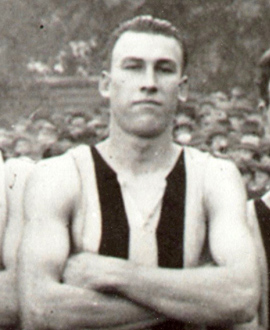 The Diamond Valley region was a fertile recruiting ground for Collingwood footballers during the Machine Team era.

Two of the team’s greatest players, Syd and Gordon Coventry, hailed from the family orchard in Diamond Creek. Horrie ‘Tubby’ Edmonds, one of the heroes of the 1929 Grand Final, was a neighbour and friend of the Coventrys. Even the Murphy Brothers, Frank and Len, lived for a short time out on a farm near Mernda.

Joe Poulter, Collingwood’s thickset and broad-shouldered follower, was yet another graduate of the Diamond Valley district. Poulter’s family had been pioneers in Greensborough, settling on a farm in 1852 almost on the site of what is now the Greensborough Plaza shopping centre. Joe’s father inherited the farm and orchard, and it was there that the future Magpie footballer grew up, along with his nine siblings. Poulter Reserve, a sports reserve in Greensborough, still stands as a family tribute.

Poulter was recruited to Victoria Park in the same year as another important moment in his life. Having joined the police force in the early 1920s, he was hoping this would be his vocation for many years. But Poulter was sacked, along with the rest of the force, in the famous Police Strike of 1923.

He played his first game for Collingwood that same season. Within 12 months the Football Record was hailing a rapid improvement. “He has developed into a great player, and is a wonderful high mark,” it noted.

In his five and a half seasons with the club, Poulter was an honest toiler, playing in a number of roles. The Encyclopedia of AFL Footballers describes him as “a big and solid follower … with a fair turn of pace who could give and take a bump unflinchingly”. The Sporting Globe described him as a determined “do-or-die type”. “Poulter, in fine fettle, is a powerful man as a follower, forward or back,” it said.

“He is a remarkably fine footballer on this season’s form. His ruckwork is of the valuable type. His marking is also approaching the highest class. Poulter, though, has a habit of being a little impetuous.”

As that description suggests, Poulter loved a contest. His kicking, however, lacked refinement, to the point where it was described on more than one occasion as “erratic”. He played in the back pocket in the 1927 Premiership against Richmond, but soon after realised his options were becoming increasingly limited at the club and crossed to South Melbourne a few games into the 1928 season. He played 37 games there in 1928, ’29 and ’31, with a coaching stint in Echuca in 1930.

Poulter later ran a number of businesses, including a hotel. He became ill with tuberculosis just after the Second World War, and died in 1947, the day after his 45th birthday, leaving a wife and young family. Sadly, his death robbed him of the chance to see much of his son, Ray’s, league career with Richmond. Ray had made his debut in 1946 and played through until 1956, representing the club in 170 matches. Fittingly, Jack Dyer and others around the club always referred to Ray as ‘Joe’ Poulter.