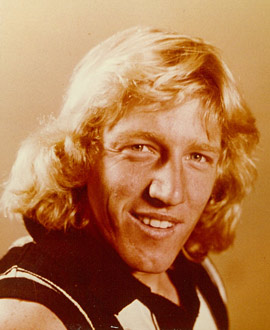 JOHN Dellamarta had almost the perfect occupation for a defender during four seasons with Collingwood – he worked in the family’s locksmith business.

While he wasn’t a traditional lock-and-chain defender, the 185cm, 84kg half-back stood out for a number of reasons and not just for his choice of employment. He had a luxuriant mop of blond hair making him instantly recognisable on and off the field, which gave him the look of a 1970s surfer. That perception wasn’t too far from the truth, given how he loved to spend some of the summer months in Barwon Heads, chasing the nearby waves.

He was a reliable backman who could also occasionally play forward and was such a prodigious kick that journalist Geoff Poulter said he wasn’t too far off what the Rocca brothers could manage a generation later. Dellamarta also didn’t mind standing up for himself when he or his teammates were being challenged either.

Unfortunately, he never managed to get the injury breaks or the game-time continuity required to become a regular in the Magpies’ line-up. He was restricted to only 17 senior games from 1975 to 1978, and it was a similar situation when he crossed to Melbourne for two seasons in a complex trade transaction.

John himself had to undergo a lengthy apprenticeship, including 25 games with the thirds, and by the time he left Victoria Park had totalled 74 games with the reserves. So his senior debut, in the Round 3 game against Fitzroy at the Junction Oval in 1975, was a great relief.

It was also a thriller, with the Pies holding on to win by two points. The debutant had eight disposals and took three marks, but was overshadowed by another first-year Magpie – Phil Carman – who kicked six goals that day. He played a few more games that year, but his season ended when he pinched a cartilage in his knee in his fourth match against Hawthorn.

And that came to sum up Dellamarta’s career at Collingwood. Every time he got a look in at senior footy, it seemed to be cut short either by selectors or injuries. There was no doubting his ability – he could run, take a good mark, was a prodigious kick and could be used at both ends of the ground – but he was never able to get a consistent run in the seniors to settle in.

There also seemed to be some doubt over his best position, as reflected in Collingwood’s 1977 Yearbook summation: “He is a type of flanker, if he curbs his temperament. Dellamarta has the ability to be a top player, but his problem is that he is another in-between size. He has the ability to hold any position on the ground, but on today’s standards he is rated as short.”

The following season’s Yearbook took a longer-term view: “Injuries have cost John Dellamarta many games with Collingwood. Since 1973, he has missed 33 games through injury. During the 1977 season John was a very promising half-back flanker but due to his old complaint – injury – he lost his chance. He is a versatile player and this season has been switched to ruck rover and is doing very well.  John is too good a player to be sitting on the sidelines with injuries, so let’s hope a bit of luck goes his way – he is regarded highly by Collingwood.”

But soon he was gone. He was hampered by leg injuries in 1978 and played only one senior game. At the end of the season, still aged only 24, he was traded to Melbourne along with Carman and Wayne Gordon for Ross Brewer (whom he had been suspended for striking in 1977).

Unfortunately his luck wasn’t much better with his new club, suffering a dislocated shoulder during the preseason and playing only two games for the Demons. He then transferred to Prahran in the VFA.

But Dellamarta remained in touch with VFL footy. He had worked with his father as a locksmith in the Southern Cross building since leaving school at Trinity College, and he ended up parlaying that experience into his own business, Southern Cross Trophies, which has been a leader in the trophy and engraving business for more than 40 years. His two former clubs have been among Southern Cross’s many clients over the years.

John Dellamarta might not have won too many trophies at VFL level, but he’s certainly been responsible for supplying plenty of them!